I’m not sure about you, but I enjoy a good magic trick.

That exhilarating moment when you are left wondering just one thing: How do they do that?

Widely believed to have been one of the greatest magicians of all time (Source), Harry Houdini is still to this day revered among those who practise the ‘dark arts’.

Born Erik Weisz in Budapest (in 1874), Houdini arrived in the US in 1878. Fascinated with magic, in 1894, he launched his career as a professional magician and drew attention for his daring feats of escape. He renamed himself “Harry Houdini” – the first name being derived from his childhood nickname, “Ehrie,” and the last name paying homage to the great French magician Jean Eugène Robert-Houdin. In 1899, Houdini’s act caught the eye of Martin Beck, an entertainment manager, and from there the rest is history. Constantly upping the ante, his feats became bolder and more death defying.

And the crowds loved him.

From stage, he moved on to film – ultimately starting his own production company, Houdini Picture Corporation. In addition, he was a passionate debunker of psychics and mediums, his training in magic helping him to expose frauds (which turned him against his former friend Sir Arthur Conan Doyle, who believed deeply in spiritualism).

This is all very interesting, but what does any of it have to do with Parkinson’s?

Magic runs deep in the Houdini family: Aron Houdini – the great, great, great nephew of Harry – is also a magician… 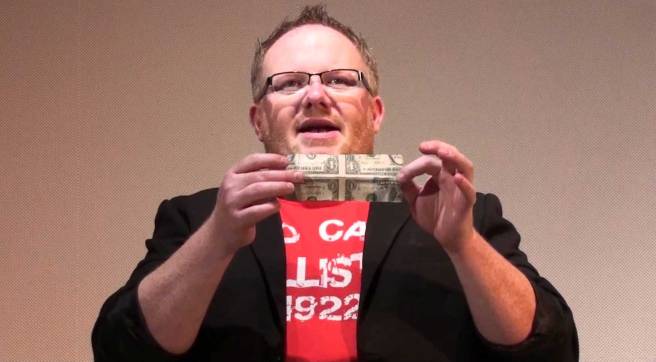 ….but one who has been diagnosed with Parkinson’s (Click here to read his story).

The Houdinis, however, are not the topic of today’s post, merely the opening act.

The main event deals with a very different type of magic Trk.

Receptors are like the lock for a particular key.

Once the key is in the lock, specific processes are activated. In the case of BDNF (the key) and Trk (the lock), the activated processes are of a neuroprotective type. BDNF is very good at keeping neurons alive.

Thus, anything that affects BDNF signalling would obviously have a negative impact on a neuron’s ability to survive.

Well, recently a protein that the Parkinson’s research community is very familiar with was found to disrupt BDNF signalling:

In this study, the researchers found the Parkinson’s associated protein Alpha Synuclein directly interacts with the TrkB receptor (there are three Trk receptors – A, B & C – and BDNF binds to TrkB).

But this interaction does not have many positive outcomes.

Interestingly, Alpha Synuclein was achieving this inhibition via several methods: Firstly, it was disrupting TrkB distribution on membranes. Second, it decreased its internalization once activated by BDNF. And it reduced its TrkB protein levels by causing the protein to be taken away by the waste disposal system.

Oh man! This is not good right? Not good at all.

Let’s hold our judgement until these results have been independently replicated, shall we? Many amazing results in research can not be repeated by other research groups, so until this result is validated it is unwise to start panicking.

What is very interesting in the findings of this study, however, is that the researcher identified the chemical that is stimulating the interaction between Alpha Synuclein and TrkB.

When your dopamine neurons release the chemical dopamine, the cell will quickly reabsorb any dopamine that is not used. That reabsorbed dopamine can then either be re-packaged for future release, OR it can be broken down for recycling/disposal.

The first step in that recycling process is conducted by an enzyme called Monoamine oxidase B (or simply MAO-B). It breaks dopamine down into DOPAL.

DOPAL is generally considered a metabolite (or an intermediary substance formed during biological processes), but don’t for a second think that increased levels of DOPAL are a good thing or a non-event.

DOPAL is highly reactive (meaning it can cause oxidative stress) and it is thus toxic for cells. It is usually rapidly processed into DOPAC.

The fact that DOPAL is interacting with another bad guy in the Parkinson’s story is not really surprising though. And this interaction between DOPAL and alpha synuclein has recently been supported by the findings of other research groups:

But if DOPAL is so bad, how do we stop it from forming?

By inhibiting MAO-B, researchers are able to reduce the levels of DOPAL and subsequently increase the levels of dopamine floating around in neurons. If the dopamine isn’t being broken down and recycled, it can be re-used, right? And this idea has given rise to the use of a class of drugs called MAO-B inhibitors as a treatment option for Parkinson’s.

By treating people with MAO-B inhibitors, we can reduce the levels of DOPAL present in their dopamine neurons, which may in turn reduces the chances of a nasty interaction between Alpha Synuclein and DOPAL.

And this is exactly what the researchers behind the TrkB/BDNF study were thinking.

The researcher concluded that their results provide “a model for the underlying molecular etiology of Alpha Synuclein-mediated neurotoxicity and dopaminergic neuronal loss in Parkinson’s disease”.

Does this result mean that rasagiline is neuroprotective?

So this is one of the most controversial topics in the field of Parkinson’s research. And it’s a big deal that completely divides investigators.

It is fair to say that the answer is not clear.

There have been two major clinical trials to try and determine whether rasagiline has any disease-modifying effects.

The first study was called the “TVP-1012 in Early Monotherapy for PD Outpatients” (or TEMPO) study:

In this study, the investigators conducted a randomised double-blind (meaning that no one knew who was getting what treatment), parallel-group, delayed-start clinical trial. The ‘parallel-group, delayed start’ design involved participants being randomly assigned to receive rasagiline (either 1 or 2 mg per day) for 1 year OR to receive placebo for 6 months followed by rasagiline (2 mg per day) for 6 months. These two groups being treated differently in parallel could then be compared at the end of the study to determine if the drug had any disease modifying effect – if there is an effect, the group that received rasagiline for the full 12 month should be better off than the group that had placebo for 6 months before being given rasagiline for 6 months (as a result of being treated with the drug for a longer period).

A total of 404 people with recently diagnosed Parkinson’s that was not being treated with dopamine-based therapy (for example L-dopa) were recruited at 32 different research sites across the United States and Canada. After the 12 month long study, the researchers found that the subjects receiving either dose of rasagiline (1 or 2 mg per day) for the whole year were better off by approximately 2 units on their Unified Parkinson’s Disease Rating Scale (UPDRS) scores when compared to the group that received the placebo plus rasagiline. This result suggests that there was an positive effect from taking the MAO-B inhibitor.

It was a minimal effect, but an effect nonetheless.

The second large clinical study that has looked at this issue was called the “Attenuation of Disease Progression with Azilect Given Once-daily” (or ADAGIO) study (Azilect being the commercial name for rasagiline):

The results of the ADAGIO study were not as clear as the TEMPO trial. Only the group of subjects receiving 1 mg daily for the full study had significantly better UPDRS scores at the end of the study. The group receiving the higher dose of rasagiline (2 mg per day) for the entire study showed no different to the group that received the placebo treatment for the first 9 months of the study. The investigators concluded that rasagiline could possibly be having a disease-modifying effect in the 1 mg group.

My initial interpretation of this data is that there isn’t much evidence for a major disease modifying effect in the clinic for rasagiline in Parkinson’s disease.

You can see why this issue is so debated by member of the Parkinson’s research community. For an interesting OPEN ACCESS review of the MAO-B inhibitor clinical trials – Click here.

While the result is very interesting, the situation in the clinic does not fully support the findings. The minimal disease modifying effect observed in clinical trials of rasagiline thus far, are not extremely convincing. But those trials have largely tested MAO-B inhibitors as a mono-therapy for Parkinson’s, perhaps in concert with other treatments a neuroprotective effect could become more apparent. This is yet to be tested though.

Based on reading the results of the study we have reviewed today, there may be some temptation by readers to try a MAO-B inhibitor treatment. Before considering any actions, a physician familiar with their medication regime should be consulted. MAO-B inhibitors are known to conflict with many other classes of drugs, including most antidepressants. So caution is advised.

And one last thing: I have taken a bit of artistic licensing with this post. Trk is generally pronounced “Track” in the research community rather than “Trick”.

EDITORIAL NOTE: The information provided by the SoPD website is for information and educational purposes only. Under no circumstances should it ever be considered medical or actionable advice. It is provided by research scientists, not medical practitioners. Any actions taken – based on what has been read on the website – are the sole responsibility of the reader. Any actions being contemplated by readers should firstly be discussed with a qualified healthcare professional who is aware of your medical history. While some of the information discussed in this post may cause concern, please speak with your medical physician before attempting any change in an existing treatment regime.

10 thoughts on “A clever new Trk for Rasagiline”