When asked why he thought his great creation “Mickey mouse” was so popular, Walt Disney responded that “When people laugh at Mickey Mouse, it’s because he’s so human; and that is the secret of his popularity”.

This is a curious statement.

Curious because in biomedical research, mice are used in experiments to better understand the molecular pathways underlying basic biology and for the testing of novel therapeutics, and yet they are so NOT human.

There are major biological differences between us and them.

It has been a major dilemma for the research community for some time with regards to translating novel therapies to humans, and it raises obvious ethical questions of whether we should be using mice at all for the basic research if they are so different from us. This problem is particularly apparent in the field of immunology, where the differences between ‘mice and men’ is so vast in some cases that researcher have called for moving away from mice entirely and focusing on solely human models (Click here and here for a good reads on this topic).

Well, we for a long time we have struggled with this same problem in the field of Parkinson’s research.

Traditional rodent models of Parkinson’s involved the delivery of neurotoxins to the dopamine neurons in the brain, which killed those cells and rendered the animals behaviourally ‘Parkinsonian’. More recently, the dopamine neurons have been stressed by the over-production of disease-associated proteins (like alpha synuclein), and this has been shown to result in cell death.

But this has begged the obvious question: how Parkinson’s-relevant are these models? (neurotoxins and over-dose of protein)

Some (myself included) would suggest ‘not very, but they are the best we have at the moment’.

This is a weak answer I’ll agree, but as I suggested in the intro above, this may be about to change. This week saw the publication of an interesting research report:

In this study, Japanese researchers have generated genetically engineered mice which lose dopamine neurons, exhibit motor complications as they age, AND appear to develop Lewy bodies – raising the possibility that this could represent a very Parkinson’s-relevant model.

Hang on a second, remind me again: what is a Lewy body? 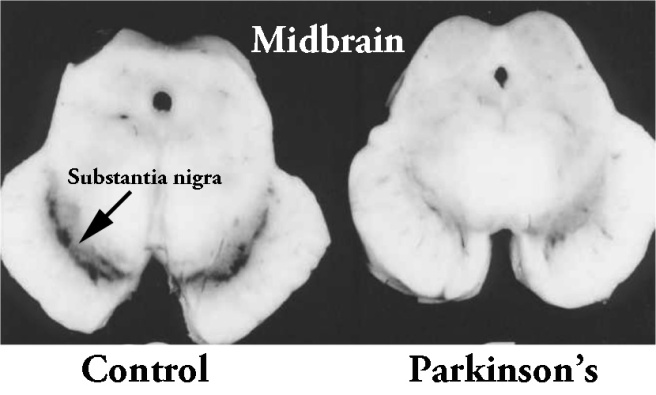 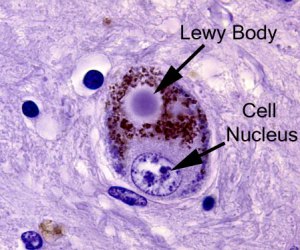 How do Lewy bodies form? And what is their function?

The short answer to these questions is:

The longer answer is: Our understanding of how Lewy bodies are formed and their actual role in neurodegenerative conditions like Parkinson’s is extremely limited.

And this is why the research report from the Japanese scientists is so interesting. They genetically engineered mice that had no ATG7 (or Autophagy Related 7) protein in their dopamine neurons. And by removing just this one protein, they observed the appearance of “Lewy bodies”.

ATG7 is an enzyme that is essential for the process of autophagy.

And yes, I know what you are going to ask next: what is autophagy?

Autophagy is an absolutely essential function in a cell. Without autophagy, old proteins would pile up making the cell sick and eventually causing it to die. Through the process of autophagy, the cell can break down the old protein, clearing the way for fresh new proteins to do their job.

Think of autophagy as the waste disposal/recycling process of the cell.

Waste material inside a cell is collected in membranes that form sacs (called vesicles). These vesicles then bind to another sac (called a lysosome) which contains enzymes that will breakdown and degrade the waste material. The degraded waste material can then be recycled or disposed of by spitting it out of the cell.

And without ATG7, this autophagy/waste disposal system breaks down.

So what happened in these mice with no waste disposal system in their dopamine neurons?

The genetically engineered mice that had no ATG7 in their dopamine neurons looked perfectly normal, until approximately 100 weeks of age. Understand that mice live for 2 years on average, so this is late age for these mice. The mice began to show issues with motor coordination tasks at 100 weeks of age, and then more serious motor deficits became apparent at 110 weeks. As you can see in the image below, the mice with no ATG7 in their dopamine neurons (the Atg7 F/F:TH-Cre mice) demonstrated a significant increase in foot slipping when they walking across a beam:

When the researchers looked at the dopamine neurons in their mice, they found no Lewy body-like aggregates at the age of 18 months in the control mice (Atg7flox/flox – which have normal levels of Atg7). But in the mutant mice (Atg7flox/flox:TH-Cre mice – those without Atg7 in the dopamine neurons), at just 2 months of age they observed inclusions starting to form. The researchers looked at the levels of a protein called p62 in these mice. p62 is a receptor for waste destined to be degraded by autophagy, and in the absence of Atg7, p62 started to build up at just 2 months of age in the mutant mice. In 18-month-old mutant mice, these p62 inclusions were larger and mainly located outside the body of the cells and mainly in their branches (neurites). 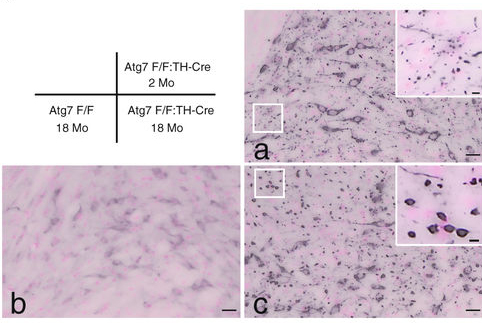 Interestingly, many of these aggregates contained both the Parkinson’s-associated protein alpha synuclein and lots of mitochondria. Mitochondria are the power stations of the cell, and when they are worn out or damaged they are disposed of via autophagy. But as you can see in panel C of the image below, the dark shapes of mitochondria are clearly visible within the Lew body-like inclusion (white arrows; inclusions are labeled with a dashed line):

The presence of old mitochondria within Lewy bodies from postmortem sections of Parkinsonian brain has recently been described in a research report that was posted last year on the preprint website BioRxiv:

Using multiple microscopic imaging techniques, the investigators of this preprint discovered that the interior of Lewy bodies is actually a crowded mess of membranes from vesicles (the bags in which proteins are transported around cells – the aqua blue arrows in the image below), old & deformed mitochondria (the orange arrows in the image below) and disrupted structural elements of the cells (various proteins). This was in complete contrast to the expected filaments.

High magnification image of a Lewy body from a PD brain. Source: Biorxiv

The Japanese investigators also found that the number of dopamine neurons decreased in aged mutant mice (Atg7 flox/flox:TH-Cre), which may have contributed to the locomotor dysfunction that they observed. They also found a reduction in the levels of dopamine in the striatum (a region of the brain where the bulk of dopamine is released).

Admittedly, the level dopamine cell loss is a small percentage of the whole, but the reduction in the levels of dopamine being released is large. This difference could indicate addition dysfunction in the dopamine neurons with regards to their functioning – that is, the cells may remain alive, but they are struggling to do their job.

This study has presented compelling data that the loss of normal autophagy in dopamine neurons can lead to movement issues, cell loss and the development of Lewy body-like structures.

And remarkably, the study is supported by previous work by an independent research group that investigated these same mice (Atg7 flox/flox:TH-Cre) and found very similar results:

In this study, researchers from the Friedman Brain Institute (Mount Sinai School of Medicine, New York) found that Atg7 flox/flox:TH-Cre mice developed intracellular p62 inclusions in dopamine neurons, as well as a delayed loss of dopamine neurons (39% at 9 months of age) and locomotor impairments (significant issues also at 9 months of age). They did not look at these mice at later stages of life (as the Japanese researchers above did), which may explain why this study did not note the more “Lewy body”-like structures.

Japanese researchers have presented data on a genetically engineered mouse which indicates that disruption of the autophagy process in dopamine neurons leads to a more bona fide model of Parkinson’s, with delayed locomotor issues, dopamine cell loss and the appearance of “Lewy body”-like structures in the cells (all the hall marks of the human condition).

While these new results suggesting that a mouse can develop “Lewy bodies” are very interesting, further characterisation are required and would be extremely enlightening – especially with regards as to how the cellular inclusions actually develop. A direct microscopic comparison of these mouse “Lewy bodies” with Lewy bodies from post mortem sections of brain from people who passed away with Parkinson’s would also be desired.

If these mouse Lewy bodies are found to be the real thing, this genetically engineered mouse could be a powerful new tool for the Parkinson’s research community. Of particular interest would be the testing of new (or repurposed) drugs in these mice. A drug that could reduce the Lewy body burden and cell loss in these mice would certainly be worth clinically testing.

And if the disruption of the autophagy process is found to be an underlying process in the human condition of Parkinson’s, it begs an obvious question: what causes the disruption in autophagy?

Answer that question and I’ll nominate you for a Nobel prize.

The banner for today’s post was sourced from Bradpeek