I am a fan of Malcolm Gadwell (not an endorsement, this is just me sharing).

He has a great way of looking at a situation from a completely different angle, finding things that no one else sees, and then writing about it in a clever, easy to read manner. Having read most of his books, I was rather pleased to learn that he has a podcast – Revisionist History.

The first episodes of the most recent series of the podcast have helped to raise my fragile self esteem, because I am definitely a tortoise (just listen to the first two episodes of season 4 and you’ll understand).

Oh, and Mr Gladwell, if you ever read this – in the next series of the podcast, please have a look at the dysfunctional way we clinically test new therapies in medicine – click here to read a previous SoPD rant on this topic. Thanks!

What does Malcolm Gladwell have to do with Parkinson’s?

It all comes back to that idea of looking at a situation from a completely different angle.

Recently there was a manuscript published on the preprint database BioRxiv which grabbed my attention.

This is the manuscript here:

In this study, the researchers wanted to address the issue of concomitant diagnoses.

What does that mean: Concomitant diagnoses?

It refers to the co-occurrance or existing of markers of multiple conditions at the same time. And at the post mortem level in neurodegenerative conditions, this is an issue.

Coud you please explain why?

A definitive diagnosis of Parkinson’s can only be made at the postmortem stage with an examination of the brain. Until that moment, all cases of Parkinson’s are ‘suspected’.

When a neuropathologist makes an examination of the brain of a person who passed away with the clinical features of Parkinson’s, there are two characteristic hallmarks that they will be looking for in order to provide a final diagnosis of the condition:

1.  The loss of specific populations of cells in the brain, such as the dopamine producing neurons in a region called the substantia nigra, which lies in an area called the midbrain (at the base of the brain/top of the brain stem).

The dark pigmented dopamine neurons in the substantia nigra are reduced in the Parkinson’s brain (right). Source:Memorangapp 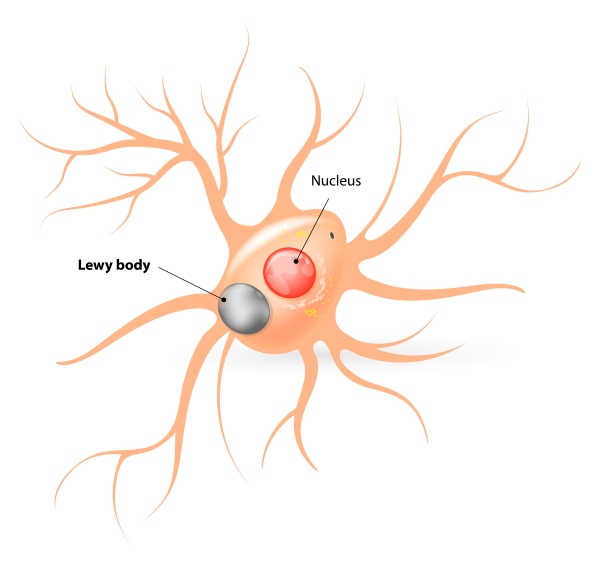 What is a Lewy body?

A Lewy body is referred to as a cellular inclusion (that is, ‘a thing that is included within a whole’), as they are almost always found inside the cell body. They generally measure between 5–25 microns in diameter (5 microns is 0.005 mm) thus they are tiny, but when compared to the neuron within which they reside they are rather large (neurons usually measures 40-100 microns in diameter).

Well, in the mid 1980’s James Leverenz and Mark Sumi of the University of Washington School of Medicine (Seattle) made a curious observation.

After noting the high number of people with Alzheimer’s that often displayed some of the clinical features of Parkinson’s, they decided to examine the postmortem brains of 40 people who had passed away with pathologically confirmed Alzheimer’s – that is, an analysis of their brains confirmed that they had Alzheimer’s.

What the two researchers found shocked them:

Of the 40 Alzheimer’s brains that they looked at nearly half of them (18 cases) had either dopamine cell loss or Lewy bodies – that characteristic feature of the Parkinsonian brain we were just talking about. They next went back and reviewed the clinical records of these cases and found that rigidity, with or without tremor, had been reported in 13 of those patients. According to their analysis, 11 of those patients had the pathologic changes that warranted a diagnosis of Parkinson’s.

And the most surprising aspect of this research report: Almost all of the follow up studies, conducted by independent investigators found exactly the same result!

It is now generally agreed by neuropathologists (the folks who analyse sections of brain for a living) that 20% to 50% of cases of Alzheimer’s disease have Lewy bodies.

In fact, in one analysis of 145 Alzheimer’s brains, 88 (that is 60%!) had chemically verified Lewy bodies (Click here to read more about that study).

Oh, and if you are wondering whether this is just a one way street, the answer is “No sir, this phenomenon works both ways”: the features of the Alzheimer’s brain (such as the clustering of a protein called beta-amyloid) are also found in many cases of pathologically confirmed Parkinson’s (Click here and here to read more about this).

This is the issue of concomitant diagnoses – many neurodegenerative conditions will have a singular label, but the evidence in the brain suggests a shared biology.

Interesting. So what did the researchers do in this new manuscript?

A team of neuropathology experts assessed the extent of 9 pathological markers across 18 regions of the 1389 brains (sounds like fun, huh).

After all of the time on the microscope was finished, the results were all pooled together and analysed as a group (1389 cases).

But it was apparent to the researchers that this method of ordering was still rather messy with a lot of noise within and outside of the diagonally organised groupings (if you look at the black squares descending diagonally across the centre of panel b in the image above, you will note that there is a lot of variability in the groupings).

The researchers attempted to clean this up by grouping cases according to their distributions of pathology – that is, based on the various scores that the received from all of the markers analysed. The researchers did this using an unsupervised community detection method for networks, known as “modularity maximization” (I’m not even going to pretend that I understand modularity maximization – for anyone interested in learning more about it though: Click here).

Understand though, that this algorithm cared nothing for the original clinical or histopathologic diagnosis of each case, and simply looked for similarities in the scores of the 9 markers.

Remarkably, the algorithm grouped all of the cases into 4 clusters (see panel c in the image below). The clusters were based on the protein markers Tau (Cluster 1), β-amyloid (Cluster 2), TDP-43 (Cluster 3), and α-synuclein (Cluster 4).

Hopefully you will agree that there is now a lot less variability within the diagonal black boxes.

So what were the 4 clusters?

This is where things start to get more interesting.

When the researchers went back and looked at the original diagnosis of each case, they found that the distribution of the 4 clusters looked like this:

There was structure to the distribution and it was largely based on the markers used in the analysis:

That makes sense. What was so special about this result?

Well, there are differences between the clusters based on the markers. But then there are also similarities.

Note that ALL of the clusters contain cases that were originally diagnosed as Alzheimer’s.

You have to ask the question “Why?”

To answer this, the researchers started looking into how their algorithm separated patients with the original ‘Alzheimer’s grouping’. They started by visualising clusters according to ‘Alzheimer’s’.

This analysis revealed that Alzheimer’s cases in the α-synuclein cluster had Lewy body dementia as a secondary diagnosis, while the Tau (cluster 1) and TDP-43 (cluster 3) groupings largely did not have any additional diagnoses.

After generating new disease categories based solely on post-mortem pathology, the investigators sought to characterise cases within each cluster in terms of their clinical scores (eg. what they scored on clinical tests like the Montreal Cognitive Assessment or MoCA). We are going to leave this study here as the numbers start to get smaller and we’ll wait to see what the peer-reviewers think of the rest of the report.

But the main finding of the study was that 1389 cases of neurodegeneration could be looked at “from a completely different angle”, and suddenly there is an alternative view of the situation: Using a disease-blind approach, the researchers assigned each of 1389 cases to new disease clusters by simultaneously accounting for the levels of 9 markers across 18 regions of postmortem brain.

The investigators are careful with their interpretation of the results, chosing to focus more on the potential use of the approach on other medical conditions, etc. But I liked the idea that perhaps we are mistaken in the limited view of some of these neurodegenerative conditions.

Maybe we are wandering down the wrong path thinking that Parkinson’s is just an alpha synuclein condition. Or that Alzheimer’s is solely beta amyloid-based.

And perhaps (more importantly) we are missing a trick.

There is something very appealing in viewing all of these conditions as part of a larger whole.

This is Brian Walloch:

In November 2017, at the age of 37, he was diagnosed with Amyotrophic lateral sclerosis (or ALS).

Also known as Lou Gehrig’s disease and motor neuron disease, ALS is a neurodegenerative condition in which the neurons that control voluntary muscle movement are lost. The condition affects 2 people in every 100,000 each year, and those individuals have an average survival time of two to four years (Click here to read a previous SoPD post on ALS).

Since his diagnosis, Brian has become a tireless advocate for ALS – starting a charity (IamALS) appearing in front of congress, asking for more funding for ALS research:

Recently, however, Brian’s message has been changing, from “join together with those of us in the fight against ALS” to “Cure one. Cure all”, where he has joined with advocates from other neurodegenerative conditions:

The idea is rather than fighting in isolation – for example, there are 330K people globally affected by ALS (Source) and 6M by Parkinson’s (Source) – why not pool resources together?

If you bring all of the neurodegenerative conditions together, you suddenly start looking at large numbers of people being affected, and that collective could benefit from co-funded, collaborative research into many of the overlapping biological features (see the research reviewed above) or shared biorepositories (Click here to read about this is the context of Parkinson’s).

Surely there is more to learn from a Parkinson’s Progression Markers Initiative (or PPMI – a landmark observational clinical study being conducted by the Michael J Fox Foundation), if we are comparing the Parkinson’s findings with additional conditions like Alzheimer’s, ALS or Multiple Sclerosis.

Not to mention the potential overlaps in the repurposing or clinical testing of new therapies. Perhaps compounds that are being evaluated and tested in the Cure Parkinson’s Trust’s Linked Clinical Trials initiative would benefit individuals in other conditions?

It is an idea worth exploring further (after a little sleep perhaps… it’s late now).

One of my favourite episodes from season 1 of Malcolm Gladwell’s Revisionist History podcast was called ‘Carlos doesn’t remember‘. It took a critical look at capitalisation – “the measure of how well America is making use of its human potential” – and just how much of that human potential is never even given a chance, simply because we are looking at the situation the wrong way.

It is a really intriguing idea.

One that may not be adopted overnight, but certainly (as we said above) one worthy of further exploration.

The banner for today’s post was sourced from medicaltourismtraining.