Few people outside of the biomedical sciences may have heard of the Scripps Research Institute, but it is the largest private, not-for-profit medical research facility in the United States and among the largest in the world. It is headquartered in La Jolla, California but it has a sister facility in Jupiter, Florida.

Collectively, “The Scripps” has 250 laboratories, which employs over 2,400 scientists, technicians, graduate students, and administrative staff.

It was founded in 1924 by journalist/philanthropist Ellen Browning Scripps.

The Scripps covers a wide variety of area in biomedical research, but this week a group of researcher led by scientists at the Florida Scripps institute published an interesting report on Parkinson’s:

In this study, the researchers were interested in proteins that could be playing a major role in the development of dyskinesias.

Dyskinesias (from Greek: dys – abnormal; and kinēsis – motion, movement) are a category of movement disorders that are characterised by involuntary muscle movements. And they are certainly not specific to Parkinson’s.

But in the case of Parkinson’s, dyskinesias have generally been believed to be associated with long-term use of levodopa (also known as Sinemet or Madopar – levodopa with carbidopa and levodopa with benserazide, respectively).

NOTE: Long-term use of levodopa is not a certainty for developing dyskinesias, but there is an association. It will differ from person to person.

As for how they develop, there is a lot of debate over this topic, but there are some basic details that researchers generally tend to agree on.

Before being diagnosed and beginning a course of levodopa, the locomotion parts of the brain in a person with Parkinson’s gradually becomes more and more inhibited. This increasing level of inhibition results in the slowness and difficulty in initiating movement that characterises this condition.

A person with Parkinson’s may want to move, but they can’t – they are inhibited. In effect, they are akinetic (from Greek: a-, not, without; and kinēsis – motion). 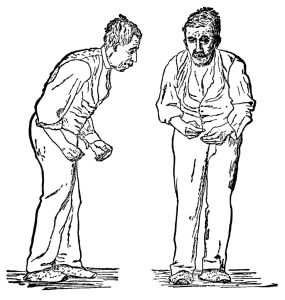 Once inside the brain, levodopa is quickly converted into dopamine. It is changed into dopamine by an enzyme called DOPA decarboxylase, and this change rapidly increases the levels of dopamine in the brain, allowing the locomotion parts of the brain to function more normally.

The chemical conversion of L-DOPA to dopamine. Source: Nootrobox

In understanding this process, it is important to appreciate that when an levodopa tablet is consumed and levodopa enters the brain, there is a rapid increase in the levels of dopamine. This ‘spike’ in the supply of dopamine will last for the next few hours, before the dopamine is eventually used up.

As the effects of the levodopa tablet wear off, another tablet will be required. This use of multiple levodopa pills across the day gives rise to a wave-like shape to the dopamine levels in the brain over the course of the day (see the figure below). The first pill in the morning will quickly lift the levels of dopamine enough that the individual will no longer feel akinetic. This will allow them to be able to function with normal controlled movement for several hours before the levodopa begins to wear off. As the levodopa wears off, the dopamine levels in the brain drop back towards levels that will leave the person feeling akinetic and at this point another levodopa tablet is required.

A hypothetical illustration of dopamine levels over a day

After several years of levodopa use, many people with Parkinson’s will experience a weaker response to each tablet. They will also find that they have more time during which they will be unable to move (exhibiting akinesia). This is simply the result of the slow progression of Parkinson’s – levodopa treats the motor features of the condition but only hides/masks the fact that the disease is still progressing.

To combat this shorter response time, the dose of levodopa is usually increased. This will result in increasing levels of dopamine in the brain (as illustrated by the higher wave form over time in the image below). Gradually it will take more levodopa medication-induced dopamine to lift the individual out of the akinetic state.

Again this illustration is hypothetical (situation differs between individuals)

This increasing of levodopa dosage, however, results in too much dopamine being present in the brain at times. And this situation is often associated with the gradual development of abnormal involuntary movements that appear when the levels of levodopa induced dopamine are the highest.

These are the involuntary muscle movements that we refer to as dyskinesias.

Ok, so what does the new research report suggest?

In their study, the researchers were interested in a protein called RasGRP1.

RAS guanyl-releasing protein 1 (or RasGRP1) is a protein that functions as an activator of another protein called RAS.

When RAS is ‘switched on’ by RasGRP1, it subsequently activates other proteins, which in turn initiate all kinds of important biological activities. 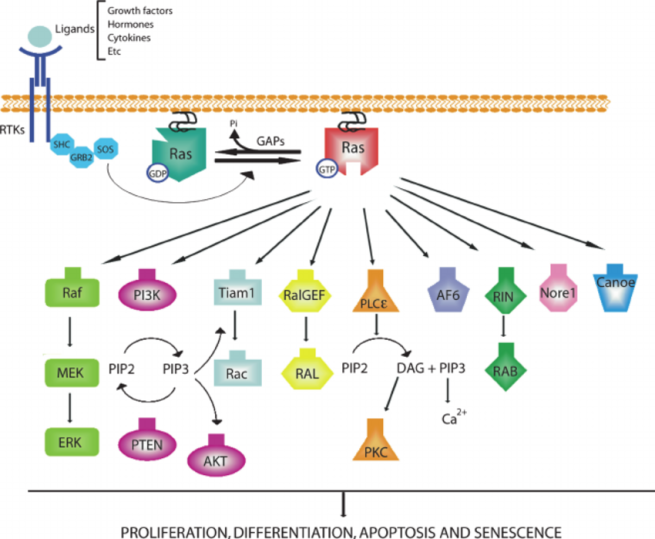 Lots of things happen when RAS is activated. Source: Researchgate

So this story really starts back in 2011, when this report was published:

In this study, the researchers found that another protein called Rhes influenced levels of dyskinesia. Like RasGRP1, Rhes also affects RAS activity. Importantly, however, when Rhes was lowered in mice, their levodopa-induced dyskinesias were also reduced. And critically, this effect did not change the motor improvement to levodopa treatment, suggesting to the researchers that Rhes could be a therapeutic target for treating dyskinesia.

Interesting side note here: the investigators also reported that Rhes binds to and activates mTOR (Click here to read a previous SoPD post on this topic). Their results suggest that agents that block Rhes from binding to mTOR, can reduce dyskinesias – thus is will be interesting to see if the TORC1 inhibitor, RTB101 being clinically tested in Parkinson’s in New Zealand by the biotech company resTORbio Inc has any affect on dyskinesias (or even delaying the onset of them).

The researchers explored this Rhes research further and in 2016 they published this report:

In this study, the researchers highlighted a protein called RasGRP1 (yes, that RAS guanyl-releasing protein 1 – the same protein we were discussing above). They reported that RasGRP1 interacts with and stabilises Rhes, in effect promoting an abundance of the protein and enhancing its effect.

And this brings us back to the new research report.

So what did the discover in the new research report?

In the recently published report, the investigators took a good look at RasGRP1 in the context of levodopa-induced dyskinesias:

In this study, the researchers reported that levodopa treatment caused an increase in RasGRP1 levels in the striatum (the region of the brain where the chemical dopamine is released) of both mouse and primate models of Parkinson’s.

The investigators next tested if levodopa-induced dyskinesias could be caused in mice with no RasGRP1. They bred some mice that had been genetically engineered to not produce the RasGRP1 protein, and they then induced a model of Parkinson’s and started treating the mice with high levels of levodopa.

Remarkably, the researchers found that the absence of RasGRP1 protein dramatically reduced levodopa-induced dyskinesias, without interfering with the therapeutic effects of the levodopa treatment. As you can see in the image below, while normal/wild-type (WT) mice gradually developed higher abnormal involuntary movements (or AIMs) scores as the days of high dose levodopa treatment continued. But in the mice with no RasGRP1, this effect was significantly reduced.

Another side note: curiously, these mice with no RasGRP1 were fertile and had no significant changes in their levels of motor activity, or any undesirable issues/side effects elsewhere in the body – suggesting that RasGRP1 could be a good target for therapeutic intervention.

The researchers concluded their study by suggesting that drugs reducing “RasGRP1 in adults may produce beneficial effects against levodopa-induced dyskinesias without inducing serious adverse effects“.

Has anyone else ever reported these findings before?

There have also been reports corroborating reducing Rhes levels also reduces the severity of dyskinesias (Click here to read more about this).

But this is the first time researchers have zeroed in on RasGRP1 as a potential causal factor in dyskinesias.

It is interesting to note, however, that inhibition of another RasGRF1 (Ras protein-specific guanine nucleotide-releasing factor 1 – different from RasGRP1) also reduces levodopa-induced dyskinesia:

Like RasGRP1, RasGRF1 is also involved in the conversion of Ras from an inactive (GDP-bound) form to an active (GTP-bound) form. And in this study, the researchers reported that genetically engineered mice (that produce no RasGRF1 protein) exhibited significantly less dyskinesias when exposed to high dose levodopa (compared to normal mice). And this did not affect the beneficial effects of levodopa on motor ability.

In addition, in a primate model of Parkinson’s, a gene therapy treatment that reduced RasGRF1 levels also reduced levodopa-induced dyskinesias (again without affecting the positive treatment effects of levopdopa).

The researchers concluded that a therapy combining Ras-GRF1 partial inhibition may provide an effective anti-dyskinetic approach.

Interesting, so what happens next?

I am not sure. But at a guess, two things.

How will they do that?

There are many different ways to screen for or develop therapeutic agents, but it is interesting to note that the Scripps Institute has a high throughput drug screening facility that is hopefully now attempting to identify inhibitors of RasGRP1.

Levodopa-induced dyskinesias are one of the most debilitating aspects of Parkinson’s for a lot of sufferers, and there are currently a limited number of treatments to help alleviate these involuntary movements. Recently, researchers in the USA have identified a new aspect of the underlying biology of dyskinesia, which provides new insights but may also point towards future potential therapies.

While disease modification remains challenging for Parkinson’s, it is encouraging that significant efforts are being made to deal with some of the more troublesome aspects of living with the condition. And hopefully, these projects will bear fruit in the not too distant future.

The banner for today’s post was sourced from kindredproductions

7 thoughts on “Getting a GRP on dyskinesias”