Here at the SoPD we are politically neutral.

Here we will discuss what has happened and what it means for the Parkinson’s research community. 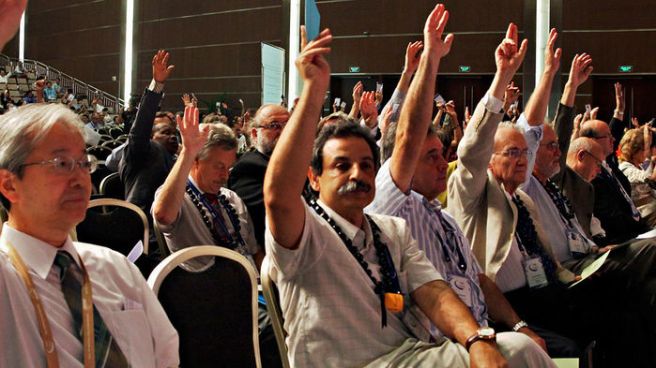 On the 3rd February, the organising committee of the Commission G2 Massive Stars, part of the International Astronomical Union (IAU) announced that it would not hold any scientific meetings in the United States of America as long as a temporary ban on the entry of any persons from Libya, Sudan, Somalia, Syria, Iran, Iraq, and Yemen, is in place.

This vote was in response to the January 27th signing of Executive Order 13769, which limits the number of refugees arriving in the USA to just 50,000 and suspended the US Refugee Admissions Program (USRAP) for 120 days (after which the program will be resumed with new conditions for individual countries). The order also imposes a temporary travel ban on the 7 countries listed above for 90 days, after which an updated list will be made. Notably the suspension for Syrian refugees is indefinite, but the order allows for exceptions to be made on a case-by-case basis. (Source: Wikipedia).

With just 12,450 individual members (from 74 countries, including Iran), the IAU’s decision is purely a small symbolic gesture. And while their vote has nothing to do with Parkinson’s disease, we note that other scientific research organisations (and many individual scientists) are making/contemplating similar measures/gestures – not simply calls to boycott US-based conferences but also particular scientific journals (for more on this click here).

Of particular importance to the Parkinson’s community is the Society for Neuroscience (SfN) meeting to be held in Washington DC in November of this year (luckily the annual Parkinson’s disease and Movement disorder conference will be held in Vancouver this year). Each year, 30-40,000 scientists and advocates from around the world gather at these SfN meetings to share/discuss novel findings and form new collaborations. A great deal of Parkinson’s research is discussed at these meetings and the associated satellite meetings that take place the week before or after.

The president of the SfN has already issued a press release regarding the executive order (Click here to read that), but many researchers are already pulling out of invited presentations. For example, Adrian Owen, a well-known neuroscientist from Western University (Ontario) publicly announced on twitter that he was refusing an invitation to present a lecture at the meeting in Washington DC:

Yup. Made the same decision today. Pulling out of an invited talk at @SfNtweets https://t.co/gSIE1pYdF8

At the time of publishing this post, a federal appeals court had denied a Justice Department’s request to lift the restraining order and allow the immigration ban to continue. The 9th U.S. Circuit Court of Appeals in San Francisco has asked for the Justice Department to file a counter-response by 3pm Monday (Click here to see that statement), which means that the restraining order remains in place for the next 24 hours at least.

Whether the restraining order is lifted and Executive Order 13769 is brought back into effect is a matter for the courts to decide. The outcome, however, is already having an impact as many scientists symbolically refuse to attend conferences in the US (it will be interesting to see what attendance is this year at the SFN meeting).

We are not going to speculate on the possible consequences of Executive Order 13769, except to say that 2017 may not be a bonanza for US based research conferences. We will be watching events as they unfold and will discuss them here if they relate to the Parkinson’s community.

The banner for today’s post was sourced from ABC News