Parkinson’s is a neurodegenerative condition, meaning that cells in the brain are dying.

First described by Mr James Parkinson in 1817, it is characterised by a triad of motor features: 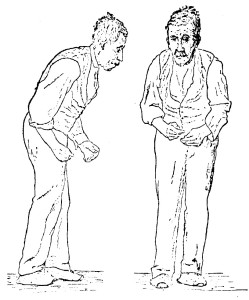 Drawing of an individual with Parkinson’s, by Sir William Richard Gowers
(first published in A Manual of Diseases of the Nervous System(1886))
Source: Wikipedia

People with Parkinson’s will often have stooped posture and a short shuffling walk. They will sometime ‘freeze up’ and have trouble initiating movement.

Parkinson’s is also associated with other symptoms, such as:

It should be noted, however, that these latter symptoms can vary from individual to individual.

The motor features of Parkinson’s are associated with the loss of dopamine neurons in the brain. Approximately 60% of them are lost by the time these motor features begin to appear. Dopamine is a chemical produced in the brain (referred to as a neurotransmitter), which is released between cells, allowing for signals to be passed on. 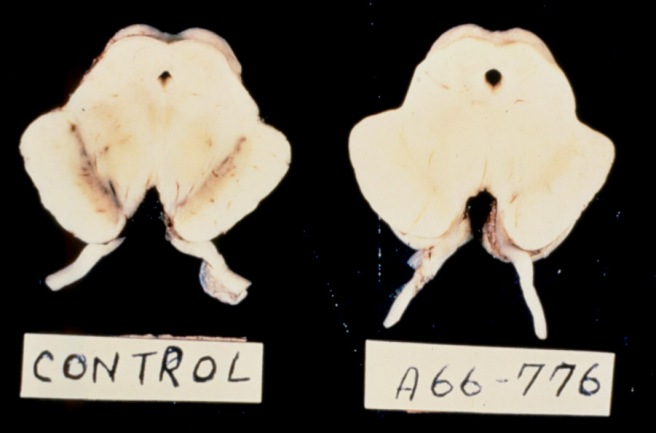 A photo of sections of the midbrain. The control (left) section is from a healthy individual,
and the dark areas on the tissue are where the dopamine neurons reside.
The section on the right is from an individual who suffered from Parkinson’s.
Source: Springer

The bulk of the dopamine neurons reside in an area deep inside the brain, called the midbrain (Greek: mesencephalon). In the human brain, the dopamine neurons can be visualised with the eye due to presence of a chemical called neuromelanin. This dark appearance gave rise to the region (where the dopamine are located) being called the substantia nigra (or ‘substance black’). In the image above, you can see the dark neuromelanin area in the healthy brain (left), but it is much harder to see in the Parkinsonian brain (right). 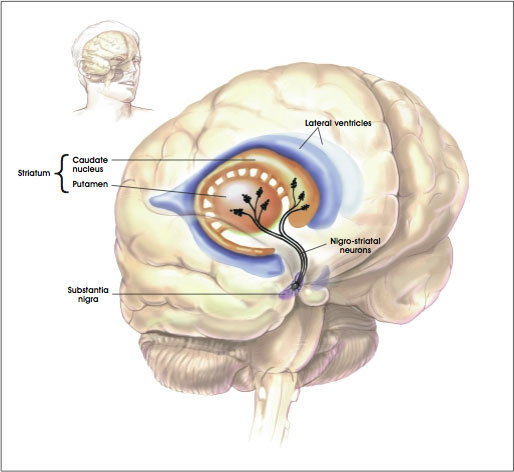 A diagram illustrating the location of the substantia nigra dopamine neurons
in the human brain, and their fibre projections to the striatum . Source: NIH 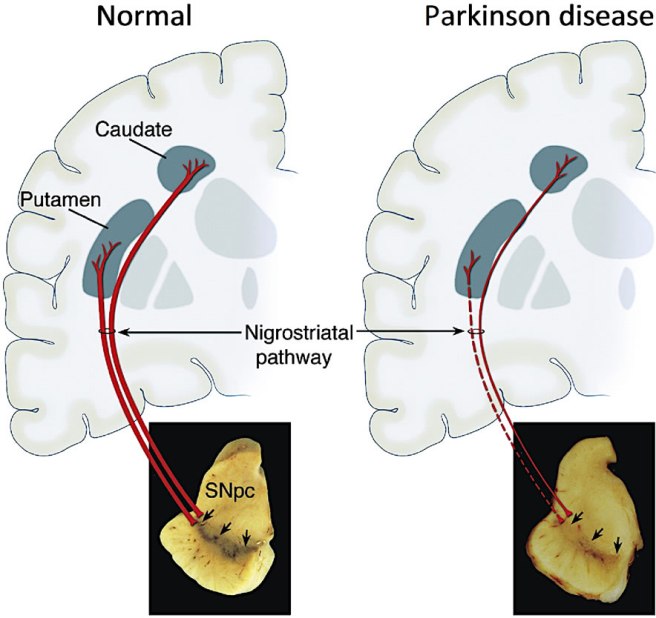 The loss of dopamine cells and branches in Parkinson’s. Source: Scrip

Brain scanning techniques allow us to visualise dopamine release in the human brain (what is often called a ‘DATscan’), and it is apparent in people with Parkinson’s that there is less dopamine being released in the striatum.

Brain imaging photos illustrating the release of dopamine (red).
The  image on the left is from a healthy individual,
while the image on the right has been taken from
someone suffering from Parkinson’s. Source: The Nation

Cells in the striatum attempt to inhibit the signals being sent from the overlying motor cortex to the muscles in the body. The role of the released dopamine is to tone down that inhibition – it acts as a volume control on the inhibitory signals. Thus, with the loss of the dopamine in Parkinson’s, there is less control over the inhibition and the signal from the cortex becomes blocked in the striatum, resulting in a slowness and stiffness of movement.

While major scientific advances are being made, there is currently no cure for the condition, and treatment is based on replacing the lost dopamine (with medications such as L-dopa). Numerous alternative procedures are available (e.g. deep brain stimulation, etc), but there are currently no halting therapies.

Men are almost twice as likely to be affected by Parkinson’s as woman. It affects approximately 0.1-2% of the general population. This increases to 1% of the population over the age of 60 years, and approximately 10% of those over 80 years. But the is not necessarily one of the elderly – 5% of all people diagnosed with Parkinson’s are under the age of 40, such as the actor Michael J Fox.

2 thoughts on “What is Parkinson’s?”