Gretschen Amphlet was a long-time resident of Cambridge (UK) who suffered from Parkinsons’s disease. Every year she is remembered in a memorial lecture in April.

This year, Prof Roger Barker of Cambridge University was asked to give the talk. 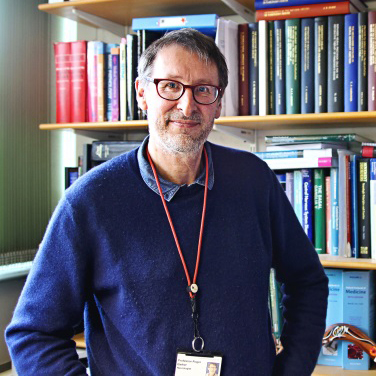 He is a Professor of Clinical Neuroscience at the University of Cambridge and an Honorary Consultant Neurologist at Addenbrooke’s Hospital in Cambridge. Prof |Barker conducts both lab-based and clinical research on Parkinson’s disease, co-ordinating large clinical studies such as the Transeuro cell transplantation trial currently being conducted.

His lecture was titled: Can stem cells deliver on their promise for Parkinson’s?

The event is organised by Parkinson’s UK.

…and we were present in the lecture hall for the event. Parkinson’s UK filmed the lecture and that footage is available online (click here to watch it). We also offer a transcript of the lecture – to read the transcript, please click here.