Being a proud kiwi, I am happy to highlight and support any research coming out of New Zealand.

Recently a new commentary has been published suggesting that living in the NZ city of Rotorua (‘Roto-Vegas‘ to the locals) may decrease the risk of developing Parkinson’s disease.

In today’s post, we will review the research behind the idea and discuss what it could mean for people with neurodegenerative conditions, like Parkinson’s disease.

Rotorua is a small city in the central eastern area of the North Island of New Zealand (Aotearoa in the indigenous Māori language).

The name Rotorua comes from the Māori language (‘roto’ meaning lake and rua meaning ‘two’). The full Māori name for the spot is actually Te Rotorua-nui-a-Kahumatamomoe. The early Māori chief and explorer Ihenga named it after his uncle Kahumatamomoe. But given that it was the second major lake found in Aotearoa (after lake Taupo in the centre of the North Island), the name that stuck was Rotorua or ‘Second lake’. 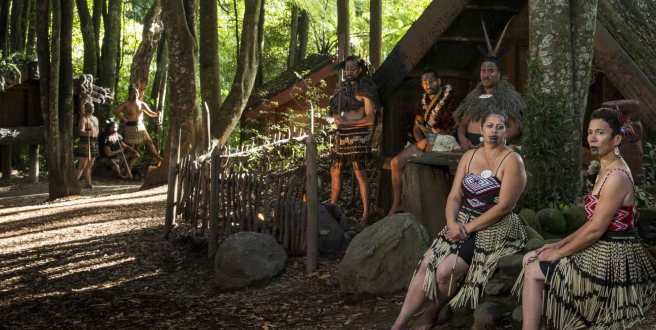 Similar to lake Taupo, Rotorua is a caldera resulting from an ancient volcanic eruption (approximately 240,000 years ago). The lake that now fills it is about 22 km (14 mi) in diameter.

The volcano may have disappeared, but the surrounding region is still full of geothermal activity (bubbling mud pools and geysers), providing the region with abundant renewable power and making the city a very popular tourist destination.

Before visiting the city, however, travellers should be warned that Rotorua’s other nicknames include “Sulphur City” and “Rotten-rua”, because of the smell that results from the geothermal activity.

And speaking from personal experience, the “rotten eggs” smell is prevalent.

Interesting, but what has this got to do with the science of Parkinson’s disease?

Well, the rotten egg smell is the result of hydrogen sulfide emissions, and recently it has been suggested that this pungent gas may be having positive benefits on people, particularly with regards to Parkinson’s disease.

This idea has been proposed by Dr Yusuf Cakmak at the University of Otago in a recent commentary:

In his write up, Dr Cakmak points towards two studies that have been conducted on people from Rotorua. The first focused on examining whether there was any association between asthma and chronic obstructive pulmonary disease and exposure to hydrogen sulfide in Rotorua. By examining air samples and 1,204 participants, the investigators of that study no association (the report of that study is OPEN ACCESS and can be found by clicking here).

The second study is the more interesting of the pair:

In this study, the investigators recruited 1,637 adults (aged 18-65 years) from Rotorua. They conducted neuropsychological tests on the subjects, measuring visual and verbal episodic memory, attention, fine motor skills, psychomotor speed and mood. The average amount of time the participants had lived in the Rotorua region was 18 years (ranging from 3-64 years). The researchers also made measurements of hydrogen sulfide levels at the participants homes and work sites.

While the researchers found no association between hydrogen sulfide exposure and cognitive ability, they did notice something interesting in the measures of fine motor skills: individuals exposed to higher levels of hydrogen sulfide displayed faster motor response times on tasks like finger tapping. Finger tapping speed is an important part of Parkinson’s Motor Rating Scale examination tests.

The investigators behind the study concluded that the levels of hydrogen sulfide in Rotorua do not have any detrimental effect on the individuals living in the area,

Dr Cakmak, however, wondered whether “relatively high, but safe, hydrogen sulfide levels in Rotorua could help protect the degradation of dopaminergic neurons associated with Parkinson’s Disease?” (based on the better performance on the motor response time).

Hang on a second, what exactly is hydrogen sulfide?

Hydrogen sulfide (chemical symbol: H2S) is a colourless gas. Its production often results from the the breaking down of organic material in the absence of oxygen, such as in sewers (this process is called anaerobic digestion. It also occurs in volcanic and geothermal conditions.

About 15 years ago, it was found in various organs in the body and termed a gasotransmitter. A gasotransmitter is a molecule that can be used to transmit chemical signals from one cell to another, which results in certain physiological reactions (oxygen, for example, is a gasotransmitter).

Hydrogen sulfide is now known to be cardioprotective (protection of the heart), and many years of research have demonstrated beneficial aspects of using it in therapy, such as vasodilation and lowering blood pressure, increasing levels of antioxidants, inhibiting inflammation, and activation of anti-apoptotic (anti-cell death) pathways. For a good review of hydrogen sulfide’s cardioprotective properties – click here.

The demonstration of the protective properties of hydrogen sulfide in other bodily organs have led neuroscientists to start investigating whether these same benefits could be utilised in treating disorders of the brain.

And the good news is: hydrogen sulfide can have positive benefits in the brain – Click here for a good review of the brain-related research.

Has other research been conducted on hydrogen sulfide regarding Parkinson’s disease?

Yes. And here is where the story starts to get really interesting.

Initially, there were reports that hydrogen sulfide could protect cells grown in culture from exposure to various neurotoxins (Click here and here for examples).

Then hydrogen sulfide was tested in rodent models of Parkinson’s disease:

In this study, the researchers firstly looked at what happens to hydrogen sulfide in the brains of rodent models of Parkinson’s disease. When rats were injected with a neurotoxin (6-OHDA) that kills dopamine neurons, the investigators found a significant drop in the level of hydrogen sulfide in the region where the dopamine cells reside (called the substantia nigra – an area of the brain severely affected in Parkinson’s disease).

Next the researchers gave some rodents the neurotoxin, waited three weeks and then began administering sodium hydrosulfide – which is a hydrogen sulfide donor  – every day for a further 3 weeks. They found that this treatment significantly reduced the dopamine cell loss, motor problems and inflammation in the sodium hydrosulfide treated animals. Interestingly, they saw the same neuroprotective effect when they repeated the study with a different neurotoxin (Rotenone). The investigators concluded that hydrogen sulfide “has potential therapeutic value for treatment of Parkinson’s disease”.

And this first study was followed up one year later by a study investigating inhaled hydrogen sulfide:

In this study, the investigators gave mice a neurotoxin (MPTP) and then had them breathe air with or without hydrogen sulfide (40 ppm) for 8 hours per day for one week. The mice that inhaled hydrogen sulfide displayed near normal levels of motor behaviour performance and significantly reduced levels of neurodegeneration (dopamine cell loss).

Inhalation of hydrogen sulfide also prevented the MPTP-induced activation of the brain’s helper cells (microglia and astrocytes) and increased levels of detoxification enzymes and antioxidant proteins (including heme oxygenase-1 and glutamate-cysteine ligase). Curiously, hydrogen sulfide inhalation did not significantly affect levels of reduced glutathione (we will come back to this in an upcoming post).

These first two preclinical results have been replicated many times now confirming the initial findings (Click here, here, here and here for examples). The researchers of the second ‘inhalation’ study concluded the study by suggesting that the potential therapeutic effects of hydrogen sulfide inhalation now needed to be examined in more disease relevant models of Parkinson’s disease.

And this is exactly what researchers did next: 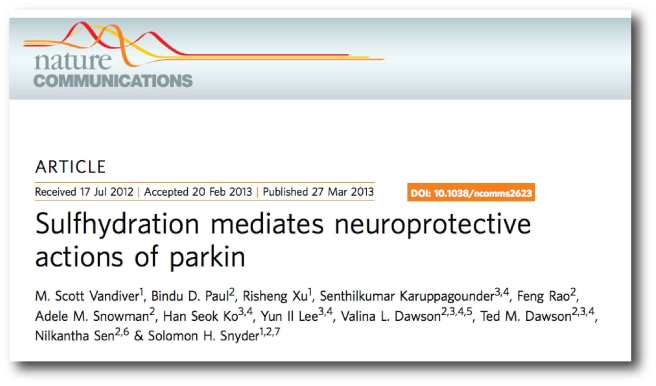 The researchers conducting this study were interested in the interaction of hydrogen sulfide with the Parkinson’s disease-associated protein Parkin (also known as PARK2). They found that hydrogen sulfide actively modified parkin protein – a process called sulfhydration – and that this enhances the protein’s level of activity.

They also noted that the level of Parkin sulfhydration in the brains of patients with Parkinson’s disease is markedly reduced (a 60% reduction). These finding imply that drugs that increase levels of hydrogen sulfide in the brain may be therapeutic.

Has anyone ever looked at hydrogen sulfide and alpha synuclein?

Not that we are aware of.

Alpha synuclein is the Parkinson’s disease associated protein that clusters in the Parkinsonian brain and forms Lewy bodies.

But researchers have looked at hydrogen sulfide and amyloid formation:

Amyloid formations are large clusters of misfolded proteins that are associated with neurodegenerative conditions, like Alzheimer’s disease and Parkinson’s disease. The researchers who conducted this study were interested in the behaviour of these misfolded protein in the presence of hydrogen sulfide. What they found was rather remarkable: the addition of hydrogen sulfide completely inhibited the formation amyloid fibrils (amyloid fibril plaques are found in brains of people with Alzheimer’s disease).

If the addition of hydrogen sulfide can reduce the level of clustered proteins in a model of Alzheimer’s disease, it would be interesting to see what it would do to alpha synuclein.

NOTE: Hydrogen sulfide levels are also reduced in the brains of people with Alzheimer’s disease (click here to read more on this topic)

Has hydrogen sulfide ever been tested in the clinic?

There are currently 17 clinical trials investigating hydrogen sulfide in various conditions (not Parkinson’s disease though).

So where can I get me some of that hydrogen sulfide?

Ok, so here is where we come in with the health warning section.

You see, hydrogen sulfide is a very dangerous gas. It is really not to be played with.

Thus, we do not recommend readers to rush out and load up on hydrogen sulfide gas.

There are many foods that contain hydrogen sulfide.

Any significant change in diet by a person with Parkinson’s disease should firstly be discussed with a trained medical physician as we can not be sure what impact such a change would have on individualised treatment regimes.

Summing up: It would be interesting to look at the frequency of Parkinson’s disease in geothermal region of the world (the population of Rotorua is too small for such an analysis – 80,000 people).

Researchers believe that components of the gas emissions from these geothermal areas may be neuroprotective. Of particular interest is the gas hydrogen sulfide. At high levels, it is a very dangerous gas. At lower levels, however, researchers have shown that hydrogen sulfide has many beneficial properties, including in models of neurodegenerative conditions. These findings have led many to propose testing hydrogen sulfide in clinical trials for conditions like Parkinson’s disease.

Dr Cakmak, who we mentioned near the top of this post, goes one step further. He hypothesises that hydrogen sulfide may actually be one of the active components in the neuroprotective affect of both coffee and smoking – and with good reason. It was recently demonstrated that the certain gut bacteria, such as Prevotella, are decreased in people with Parkinson’s disease (see our post on this topic by clicking here). The consumption of coffee has been shown to help improve the Prevotella population in the gut, which may in term increase the levels of Prevotella-derived hydrogen sulfide. Similarly smokers have a decreased risk of developing Parkinson’s disease and hydrogen sulfide is a component of cigarette smoke.

All of these ideas still needs to be further tested, but we are curious to see where this research could lead. An inhaled neuroprotective treatment for Parkinson’s disease may have benefits for other neurodegenerative conditions.

Oh, and if anyone is interested, we are happy to put readers in contact with real estate agents in sunny ‘Rotten-rua’, New Zealand. The locals say that you gradually get used to the smell.

EDITOR’S NOTE: Under absolutely no circumstances should anyone reading this material consider it medical advice. The material provided here is for educational purposes only. Before considering or attempting any change in your treatment regime, PLEASE consult with your doctor or neurologist. While some of the drugs/molecules discussed on this website are clinically available, they may have serious side effects. We therefore urge caution and professional consultation before any attempt to alter a treatment regime. SoPD can not be held responsible for any actions taken based on the information provided here.

The banner for today’s post was sourced from Trover