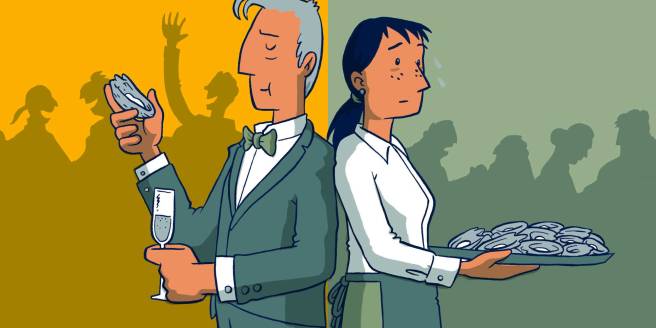 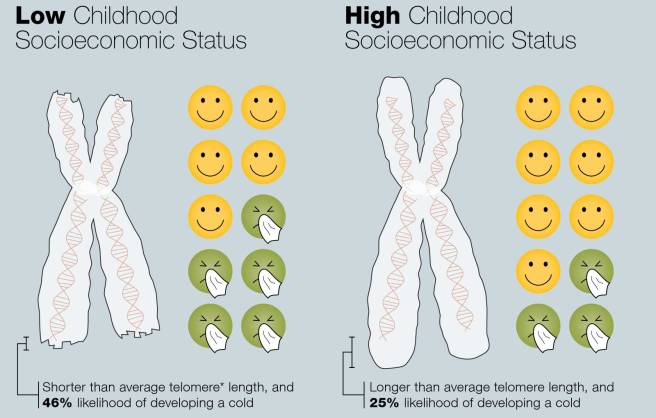 In 2013, a group of researchers at Carnegie Mellon University found a rather astonishing but very interesting association:

Children from lower socioeconomic status have shorter telomeres as adults.

Yeah, wow, strange… sorry, but what are telomeres?

Do you remember how all of your DNA is wound up tightly into 23 pairs of chromosomes? Well, telomeres are at the very ends of each of those chromosomes. They are literally the cap on each end. The name is derived from the Greek words ‘telos‘ meaning “end”, and ‘merοs‘ meaning “part”.

Telomeres are regions of repetitive nucleotide sequences (think the As, Gs, Ts, & Cs that make up your DNA) at each end of a chromosome. Their purpose seems to involve protecting the end of each chromosome from deteriorating or fusing with neighbouring chromosomes. Researchers also use their length is a marker of ageing because every time a cell divides, the telomeres on each chromosome gradually get shorter.

END_OF_DOCUMENT_TOKEN_TO_BE_REPLACED

In one of his last acts as President, this week Barrack Obama signed into law the 21st Century Cures Act. Enacted by the 114th United States Congress, the new law will have enormous implications for the American health system and for the Parkinson’s community.

In today’s post we’ll review the new law and what it will mean for Parkinson’s disease.

An early version of the hypocratic oath. Source: Wikipedia

It may surprise you, but contrary to popular belief the phrase “First do no harm” (Latin: Primum non nocere) does not appear in the Hippocratic oath that medical practitioners are suppose to abide to.

Not now, nor in the original form.

The closest we get to it is (Greek) noxamvero et maleficium propulsabo (“I will utterly reject harm and mischief”). Despite this, the basic idea of ‘not doing harm’ has been part of the foundation of medical practise since the oath was first written around the 3rd century BCE.

The idea of ‘doing no harm’, however, presents a double-edge sword for practitioners when they are faced with patients prepared to try anything to cure themselves of a crippling condition. Does the practitioner knowingly consent to allowing a subject to take a treatment that could have negative side-effects or no effect at all?

The example above is provided simply to set the stage for the discussion below. For we are about to embark on a new age when practitioners will potentially be faced with this dilemma on an ever more frequent basis. 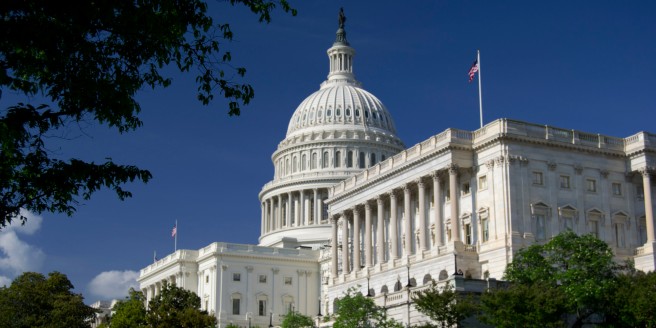 The ‘Science of Parkinson’s’ is politically neutral.

We do, however, investigate proposals and new legislations that will affect the Parkinson’s community, particularly those affecting the research world.

With that said, on the 13th December 2017, President Barrack Obama signed into law one of the most sweeping efforts to provide additional support and funding for health conditions that we have seen for some time. The 21st Century Cures Act (catchy name huh?) is going to have a big impact.

What is in the new law?

The new law provides $4.8 billion for three of the Obama administration’s key research programs over the next 10 years: Vice President Joe Biden’s cancer moonshot, the BRAIN Initiative, and the Precision Medicine Initiative. It will also give states $1 billion to fight the opioid crisis currently affecting certain areas of the country, and deliver an additional $500 million to the Food and Drug Administration (FDA).

In addition, the ‘Cures’ law will create new databases that will access health records and allow for a greater collection of information focused on certain diseases. Of particular interest to us is the creation of the ‘National Neurological Conditions Surveillance System’ at the Centers for Disease Control and Prevention (CDC), which will collect demographic information on people living with neurological diseases, like Parkinson’s disease.

Critically, the ‘Cures’ law will speed up the regulatory process for getting new treatments and devices approved for the clinic. Currently it can take up to a decade and a billion dollars to get new drugs from the lab bench to the clinic. Patient groups have been lobbying hard for this and they will be very happy with the Act being passed into law.

Who benefits from this new law?

With every new law there are winners and losers:

1. Pharmaceutical and Medical Device Companies. The law will give the FDA new authority to request fewer studies from those companies trying to bring new products to the clinic. In theory this should speed up the approval process. Critics worry that this will result in a lowering of standards and bring products to the clinic that haven’t been properly tested (According to disclosures, 58 pharmaceutical companies, 24 device companies and 26 “biotech products and research” companies have spent more than $192 million on lobbying for this new law).

2. Patient groups. As we mentioned above, patient advocacy groups have lobbied very hard for this new law (spending $4.6 million according to disclosures). The law also includes the allowance for more patient input in the drug development and approval process. This aspect alone will be a boost to the clout of such groups.

3.  Health information technology companies. The law urges federal agencies and health providers nationwide to use electronic health records systems and to collect data to enhance research and treatment (the only caveat here is that this section is unfunded by the new law). Computer companies were apparently very keen on this aspect of the new law, however, as they too have been lobbying hard.

We wanted to write that Medical schools and research hospitals may benefit since the law provides $4.8 billion over 10 years in additional funding to the federal government’s main biomedical research organisation, National Institutes of Health (NIH). It should be noted, however, that these funds are not guaranteed and will be subject to annual appropriations. So we’ll hold off stating that research is a winner until this is resolved.

1.  Preventive medicine groups. $3.5 billion — about 30 percent — of the Prevention and Public Health Fund will be cut. This fund was established under ‘Obamacare’ to promote prevention of Alzheimer’s disease, hospital acquired infections, chronic illnesses and other ailments. Obviously certainly things have to be cut in order to fund other aspects of this new law, but this particular cut is going to hurt some affected groups.

2.  The FDA. While the FDA will be given an additional $500 million (through to 2026), this amount is not enough to cover the additional workload resulting from the law. In addition, the agency has been pushing hard for extra funding to deal with deteriorating facilities, but there was nothing to cover this in the new law.

In addition, the FDA has to deal with the renewal of a controversial voucher system which rewards companies that receive approval for new treatments dealing with ‘rare pediatric diseases‘. Upon approval the company will receive a voucher that can be redeemed later and allows the company to receive a priority review of a marketing application for a different product.

Currently getting a drug or a medical device approved by the FDA and into the clinic, companies have to go through a rigorous screening process, included randomized double-blind clinical trials. With the 21st Century Cures Act, that process will be sped up by allowing the use of anecdotal evidence and observational data to clear a drug for approval. That is to say, patient feedback might be used to help get drugs into the clinic more quickly.

Getting treatments to the clinic sooner is a good though, right?

Critics of the new law, such as Public Citizen’s Health Research Group, are worried that the new law is relaxing the standards too much. For example they believe the designation of  “breakthrough” devices is too broad, and could lead to clearance of devices that aren’t ready for the market.

Neutral as we are here at the SoPD, we have to agree that there is the potential for real problems here. While we are as desperate as everyone else in the Parkinson’s community for new treatment, we have to be sure that those novel therapies are safe. Any lowering of standards will increase the likelihood of ineffective treatments coming to market.

What does it all mean for Parkinson’s disease?

There are a lot of positives for the Parkinson’s community resulting from this new law:

1.  The development of infrastructure to collect data on neurological diseases to better understand Parkinson’s is a good thing.

As the Micheal J Fox Foundation (MJFF) points out, we currently do not have really accurate information about how many people are living with Parkinson’s disease, let alone where they are located or who they are based on gender, ethnicity, etc. Critical pieces of information might be missing from our understanding of the disease based on the absence of such information.

2.  Extra funding for the Obama administration research initiatives to further our knowledge of the brain and developing individualized treatments is a good thing.

The ‘Cures law’ has allocated $1.5 billion over the next ten years to the NIH for the BRAIN Initiative. This will have benefits for Parkinson’s research. In addition, $30 million has been allocated for clinical research to further the field of regenerative medicine using stem cells.

3.  Speeding up the regulatory process and accounting for ‘real world observations’

In addition, the FDA will now be required to take patient perspectives into account in the drug approval process and the new law tasks the agency with creating a framework for collecting patient experience data.

This data will be collected from various sources (patients, family members and caregivers, patient advocacy organizations, disease research foundations, researchers and drug manufacturers), and it will detail a patient’s experience with a disease or therapy, taking into account the impact it has on their lives.

By involving patients/carers/families in this manner, it is hoped that government regulators will be more in touch with the community’s experiences and priorities as new drugs and devices enter late-stage clinical testing and move toward FDA approval.

Bring treatments to market quicker, having more information regarding disease, and having a more patient-centric approach are all good aspects to this new law. As we have suggested above, however, there will be new potential for the system to be abused. Profit motivated companies will naturally look to game this new law to get their products to market.

And this may well result in medical practitioners being confronted by that double-edged sword dilemma we discussed at the start of this post. For now, all we can really so is sit back and see what happens.

The banner for today’s post was sourced from Fanshare