When someone mentions the pharmaceutical firm Novartis, it feels like the company has been around forever, but it is actually not that old.

It was created in March 1996 via the merger of two Swiss companies: Ciba-Geigy and Sandoz. The roots of those companies can be traced back more than 250 years, but the combined entity is still a spring chicken compared to many of its major competitors.

The name Novartis results from the combination of two words “Nova Artes”, which means new art and innovation in simple forms, but there is little in what the company does that is ‘simple’. A good example of this was their block buster cancer drug Gleevec/Glivec (imatinib) which was developed by careful “rational drug design” for very specific types of cancer. 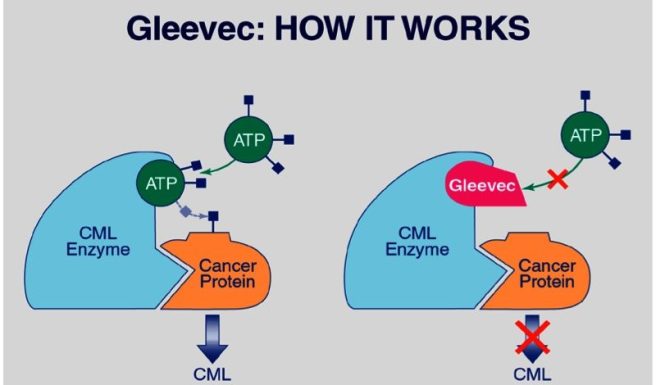 The reputation for Swiss precision seems to flow through this company and they are always making very carefully placed bets.

Which makes their news this week rather interesting.

What news did they have?

END_OF_DOCUMENT_TOKEN_TO_BE_REPLACED

In 1901, Haim Salomon and his brother-in-law Moshe Levin established a small wholesale drug business, near the Nablus Gate in Jerusalem. They called it “Salomon and Levin”. A few years later, Yitzhak Elstein, another of Haim Salomon’s brothers-in-law, joined the firm and they changed the name of the company to SLE – Salomon Levin and Elstein.

From these humble beginning, grew a pharmaceutical juggernaut that we know today as TEVA Pharmaceuticals.

TEVA – meaning “Nature” in Hebrew – is now an international producer of pharmaceutical agents, with 40,000 employees working across 65 manufacturing facilities in more than 30 countries. The company has a portfolio of more than 3,500 medicines, and they produce approximately 85 billion tablets and capsules per year (Source).

Does TEVA produce any drugs for Parkinson’s?

Yes, Azilect (rasagiline) – an approved monoamine-oxidase B inhibitor for the treatment of Parkinson’s – was developed by Teva Pharmaceuticals.

In addition, they are actively developing novel therapies. And this week they signed a really interesting deal to collaborate with a small German biotech company called MODAG.

END_OF_DOCUMENT_TOKEN_TO_BE_REPLACED

Last week at the 2021 American Academy of Neurology virtual meeting a poster was presented by the pharmaceutical company UCB.

Here at SoPD HQ, we have been eagerly awaiting these results.

They were the findings from the first Phase I clinical trial of a new molecule called UCB0599.

END_OF_DOCUMENT_TOKEN_TO_BE_REPLACED

Getting a diagnosis of Parkinson’s can be a tricky thing.

For many members of the affected community, it is a long and protracted process.

Firstly, there will be multiple visits with doctors and neurologists (and perhaps some brain imaging) until one is finally given a diagnosis of PD. There are a number of conditions that look very similar to Parkinson’s, which must be ruled out before a definitive diagnosis can be proposed.

But even after being diagnosed, there are a group of conditions that look almost identical to Parkinson’s. And many people will be given a diagnosis of Parkinson’s before they are then given a corrected diagnosis of one of these other conditions.

Can you give me an example of one of these other conditions?

Sure. A good example is multiple systems atrophy.

END_OF_DOCUMENT_TOKEN_TO_BE_REPLACED

Last week a small biotech firm in Germany came out of ‘stealth mode’.

What is stealth mode?

According to wikipedia, “in business, stealth mode is a company’s temporary state of secretiveness, usually undertaken to avoid alerting competitors to a pending product launch or other business initiative”.

After years of developing a novel drug, the German company emerged from stealth mode with €12M in series A funding, which will be used to clinically test their new treatment.

The company’s name is MODAG.

And what is MODAG planning to do now they are out of “stealth mode”?

They are planning to clinically test their lead compound which is called Anle138b.

The initial Phase I safety test will be conducted in healthy individuals, but then they will turn their attention to individuals with multiple systems atrophy.

END_OF_DOCUMENT_TOKEN_TO_BE_REPLACED

A build up of a protein called alpha synuclein inside neurons is one of the characteristic feature of the Parkinsonian brain. This protein is believed to be partly responsible for the loss of dopamine neurons in this condition.

A similar build up of alpha synuclein is also seen in the deadly skin cancer, Melanoma… but those cells don’t die (?!?)… in fact, they just keep on dividing.

Why is there this critical difference?

In today’s post we look at an interesting new study that may have solved this mystery.

Parkinson’s disease has a very strange relationship with the skin cancer melanoma.

The truly baffling detail in this story, however, is that this relationship is reciprocal – if you have melanoma you are almost 3 times more likely to develop Parkinson’s disease than someone without melanoma (Source: Baade et al 2007; Gao et al 2009).

What is melanoma exactly?

Melanoma is a type of skin cancer.

It develops from the pigment-containing cells known as melanocytes. Melanocytes are melanin-producing cells located in the bottom layer (the stratum basale) of the skin’s outer layer (or epidermis).

The location of melanocytes in the skin. Source: Wikipedia

Melanocytes produce melanin, which is a pigment found in the skin, eyes, and hair. It is also found in the brain in certain types of cells, such as dopamine neurons (where it is referred to as neuromelanin).

Approximately 2.2% of men and women will be diagnosed with melanoma at some point during their lives (Source). In women, melanomas most commonly occur on the legs, while in men they are most common on the back. Melanoma makes up 5% of all cancers (Source).

Generally, melanomas is one of the safer cancers, as it can usually be detected early by visual inspection. This cancer is made dangerous, however, by its ability to metastasise (or spread to other organs in the body). 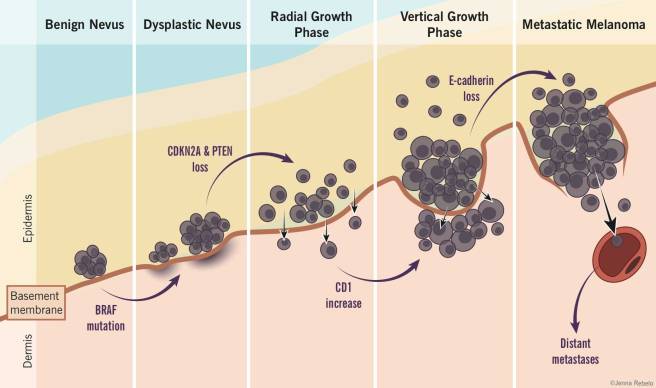 The stages of melanoma. Source: Pathophys

Are there any genetic associations between Parkinson’s disease and melanoma?

In fact, researchers have only found very weak genetic connections between two conditions (Click here to read our previous post on this). It’s a real mystery.

Are there any other connections between Parkinson’s disease and melanoma?

But recently researchers noticed that melanoma also has a build up of alpha synuclein, but those cells don’t die:

In this study, researchers from Japan found that alpha synuclein was detected in 86% of the primary and 85% of the metastatic melanoma. Understand that the protein is not detectable in the non-melanoma cancer cells.

So what is it doing in melanoma cells?

Recently, researchers from Germany believe that they have found the answer to this question:

What they observed next was fascinating: the cell morphology (or physically) changed, leading to massive melanoma cell death. The investigators found that this cell death was caused by instability of mitochondria and a major dysfunction in the autophagy process.

Mitochondria, you may recall, are the power house of each cell. They keep the lights on. Without them, the lights go out and the cell dies.

Autophagy is the garbage disposal/recycling process within each cell, which is an absolutely essential function. Without autophagy, old proteins and mitochondria will pile up making the cell sick and eventually it dies. Through the process of autophagy, the cell can break down the old protein, clearing the way for fresh new proteins to do their job.

Waste material inside a cell is collected in membranes that form sacs (called vesicles). These vesicles then bind to another sac (called a lysosome) which contains enzymes that will breakdown and degrade the waste material. The degraded waste material can then be recycled or disposed of by spitting it out of the cell.

What the German research have found is that the high levels of alpha synuclein keep the mitochondria stable and the autophagy process working at a level that helps to keeps the cancer cell alive.

Next, they replicated this cell culture research in mice with melanoma tumors. When the mice were treated with the chemical that inhibits the toxic form of alpha synuclein, the cancer cancer became malformed and the autophagy process was blocked.

The researchers concluded that “alpha synuclein, which in PD exerts severe toxic functions, promotes and thereby is highly beneficial to the survival of melanoma in its advanced stages”.

So what does all of this mean for Parkinson’s disease?

Well, this is where the story gets really interesting.

You may be pleased to know that the chemical (called Anle138b) which was used to inhibit the toxic form of alpha synuclein in the melanoma cells, also works in models of Parkinson’s disease:

In this first study the researchers discovered Anle138b by conducted a large screening study to identify for molecules that could inhibit the toxic form of alpha synuclein.

They next tested Anle138b in both cell culture and rodent models of Parkinson’s disease and found it to be neuroprotective and very good at inhibiting the toxic form of alpha synuclein. And the treatment looks to be very effective. In the image below you can see dark staining of toxic alpha synuclein in the left panel from the brain of an untreated mouse, but very little staining in the right panel from an Anle138b treated mouse. 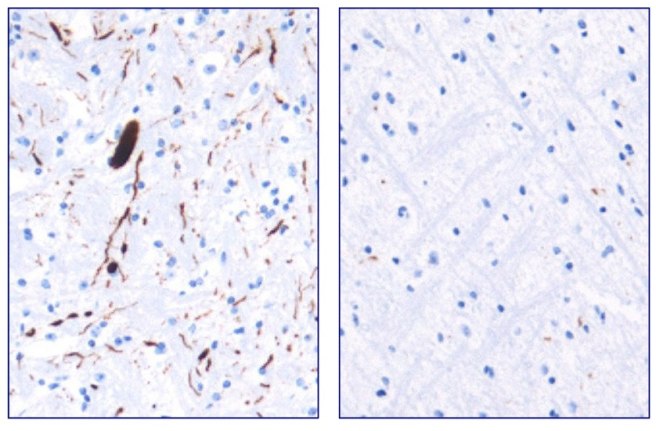 And in a follow up study, the drug was effective even if it was given after the disease model had started:

During the first study, the researchers had started Anle138b treatment in the mouse model of Parkinson’s disease at a very young age. In this study, however, the investigators began treatment only as the symptoms were starting to show, and Anle138b was found to significantly improve the overall survival of the mice.

One particularly interesting aspect of Anle138b function in the brain is that it does not appear to change the level of the autophagy suggesting that the biological effects of treatment with Anle138b is cell-type–specific (Click here to read more about this). In cancer cells, it is having a different effect to that in brain cells. These differences in effect may also relate to disease conditions though, as Anle138b was not neuroprotective in a mouse model of Multiple System Atrophy (MSA; Click here to read more about this).

Is Anle138b being tested in the clinic?

Ludwig-Maximilians-Universität München and the Max Planck Institute for Biophysical Chemistry (Göttingen) have spun off a company called MODAG GmbH that is looking to advance Anle138b to the clinic (Click here for the press release). The Michael J Fox Foundation are helping to fund more preclinical development of this treatment (Click here to read more about this).

We will be watching their progress with interest.

Summing up: There are many mysteries surrounding Parkinson’s disease, but some researchers from Germany may have just solved one of them and at the same time developed a potentially useful new treatment.

They have discovered that the Parkinson’s associated protein, alpha synuclein, which is produced in large amounts in the skin cancer melanoma, is actually playing an important role in keeping those cancer cells alive. By finding a molecule that can block the build up of alpha synuclein, they have not only found a treatment for melanoma, but also potentially one for Parkinson’s disease.

And given that both diseases are closely associated, this could be seen as a great step forward. Two birds with one stone as the saying goes.

The banner for today’s post was sourced from Wikipedia