Every week, the U.S. Centers for Disease Control and Prevention (CDC) publishes the Morbidity and Mortality Weekly Report (or MMWR).

It provides public health information and recommendations based on information collected by the CDC from all of the various state health departments. The material published in each report is provided as a public service and may be reprinted and used without permission.

On the 5th June 1981, the CDC published a MMWR, describing five cases of a rare lung infection (called Pneumocystis carinii pneumonia). This was an extremely rare, but opportunistic infection – it generally occurred in people with very compromised immune systems.

All of the five cases were young (29-36 years of age), and had previously been healthy, homosexual men living in the Los Angeles area. All of the men had additional unusual infections, which suggested to doctors that their immune systems were not working properly.

Two of the men had already died by the time the report is published.

One month later, on the 3rd July (1981), a second MMWR was published. This one mentioned further cases of Pneumocystis carinii pneumonia and cited 26 cases of a rare form of cancer known as Kaposi’s sarcoma, which is caused by a viral infection: 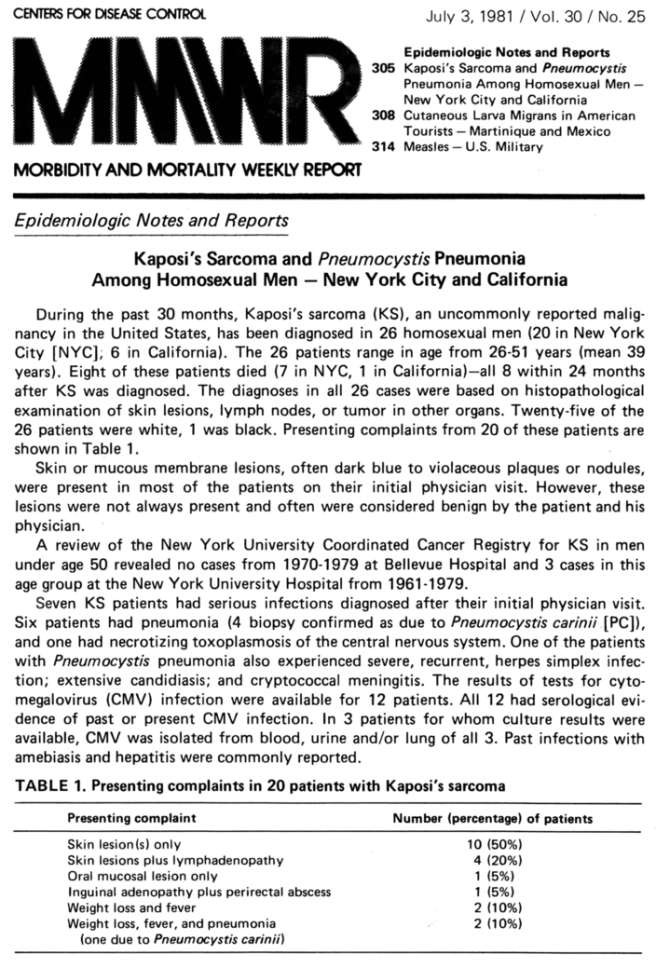 These two MMWRs were the first official reports mentioning what would go on to become known as the AIDS epidemic – a devastating, ongoing global health issue that has thus far claimed 35+ million lives.

It was also the very beginning of what would be an amazing story of patient advocacy. The one that would become the template for many future efforts. Part of that advocacy effort was called “ACT UP”, and in today’s post we will discuss what the movement was and how they achieved some amazing accomplishments.

But before we get to that, let’s start at the beginning:

What exactly is AIDS?

END_OF_DOCUMENT_TOKEN_TO_BE_REPLACED

As everyone in the Parkinson’s community is aware, in 2017 we were observing the 200th anniversary of the first description of the condition by James Parkinson (1817). But what a lot of people fail to appreciate is how little research was actually done on the condition during the first 180 years of that period.

PLEASE NOTE, however, that of the approximately 97,000 “Parkinson’s“-related research reports published during the last 200 years, just under 74,000 of them have been published in the last 20 years.

That means that 3/4 of all the published research on Parkinson’s has been conducted in just the last 2 decades.

So what happened in 2017? END_OF_DOCUMENT_TOKEN_TO_BE_REPLACED