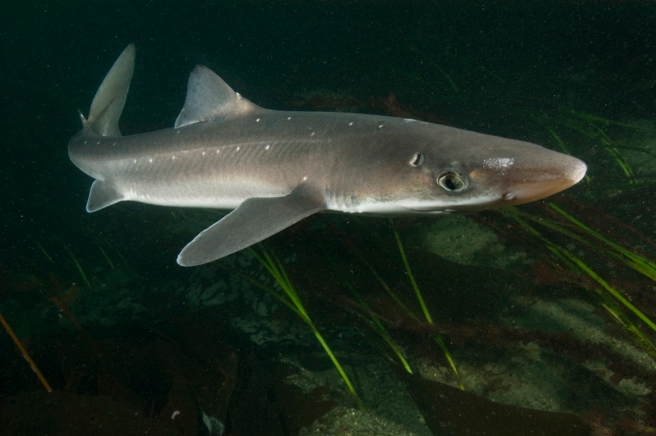 This week an interesting study was published in the scientific journal, Proceedings of the National Academy of Sciences. It involved our old friend, alpha synuclein – the aggregating protein that is associated with Parkinson’s disease – and the dogfish shark.

Not natural dance partners, I agree. But the findings of the study are very interesting.

In today’s post we will review the study and explain the connection between the protein and the shark. 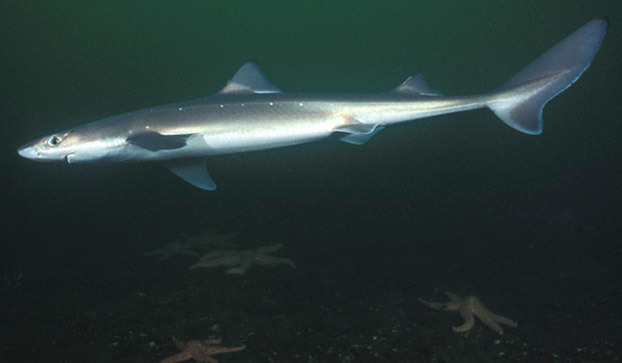 Some people call them spiny dogfish.

Others call them Spurdogs. Or Mud shark. Or even Piked dogfish.

Call them what you will – in the scientific realm they are referred to as Squalus acanthias. They are one of the most common members of the Squalide (dogfish) family of sharks. In the wild, Squalus acanthias are found in shallow waters, but can be seen further offshore in more temperate latitudes. They are relatively harmless to humans, but they do have venom in their rear fin – when under attack, the dogfish shark will arch its back and pierce/poison its attacker (so beware!).

Interesting, but what is the connection with Parkinson’s disease?

So here’s the thing about dogfish sharks: they are extremely hardy when it comes to infection.

They don’t really get sick all that often. And this is despite having a relatively “primitive” immune system (Click here to read more on this). A team led by Prof Michael Zasloff (of Georgetown University) discovered that a chemical called ‘Squalamine’ may be one of the reasons for this robustness.

Squalamine is steroid with a wide range of antimicrobial activity. Steroids are used as a treatment for certain inflammatory conditions, but the research published this week suggests another property for Squalamine.

This is the research article that was published:

In this study, the researchers discovered that squalamine can actually block alpha synuclein from aggregating (that is clumping together). They treated human cells (that produce too much alpha synuclein, which ultimately kills them) in culture with squalamine and they observed an almost complete suppression of the toxic effect of alpha synuclein.

The researchers next looked at the effects of squalamine in a microscopic worm called Caenorhabditis elegans . These tiny creatures are widely used in biology because they can be easily genetically manipulated and their nervous system is very simple and well mapped out (they have just 302 neurons and 56 glial cells!). The particular strain of Caenorhabditis elegans used in this current study produced enormous amounts of alpha synuclein, which results in muscle paralysis.

By treating the worms with squalamine, the researchers observed a dramatic reduction of alpha synuclein protein aggregating and an almost complete elimination of the muscle paralysis. In addition, they noted a reduction in the cellular damage caused by the aggregation of alpha synuclein. All in all, a pretty impression result! The researchers suggested that their findings indicate that “squalamine could be a means of therapeutic intervention in Parkinson’s disease”.

So is squalamine being tested in the clinic?

The answer is: Yes, but not for Parkinson’s disease.

There is currently a clinical trial for squalamine in people with neovascular age-related macular degeneration – a condition of the eye (click here for more information about that trial). This work is being carried out by a company called Ohr Pharmaceuticals and as far as we are aware all of their work is focused on eye treatments. Squalamine has also been tested in clinical studies of fungal infection of the scalp – tinea capitis – and appeared to be well tolerated (Click here for more information).

Regarding Parkinson’s disease, there is just one small problem:

But this is not the end of the world!

Prof Zasloff and colleagues have designed a drug very similar to Squalamine, which they have called MSI-1436 which is currently being tested. And the good news is that it can cross the blood brain barrier (Click here to read more on this). MSI-1436 appears to exhibit potent appetite suppression and anti-diabetic properties when injected in animals. MSI-1436 has been clinically tested (phase 1) for tolerance in diabetes with obesity (Click here to see the details of that trial), but that clinical trial was conducted in 2008-9 and the results are still not available. The company behind the trial, ‘Genaera Corp’, has since been shut down (Click here for more on this), and we are unaware of any follow up clinical work on this drug.

Well, the researchers in this study have found a chemical (squalamine) which is able to prevent alpha synuclein from aggregating – which is believed to be one the underlying processes in Parkinson’s disease. This means that we have another experimental therapy to add to the growing arsenal of potential future Parkinson’s disease treatments.

It is important to appreciate, however, that this is the first time this result has been shown and what we need to see now is independent replication of these results. This follow-up work will also need to involve squalamine being tested in a more advanced animal model of Parkinson’s disease (worms are cute and all, but there is only so much data we can get from them!). In addition, if squalamine (or MSI-1436) has a future in treating Parkinson’s disease, we will need to better investigate the weight-loss properties of this chemical as this would not be an ideal side effect for people with Parkinson’s disease.

As this research progresses on squalamine, we’ll report it here.

Wow! So this is all happening very fast.

Today, Enterin Inc. has just enrolled their first patient in the RASMET study: a Phase 1/2a randomised, controlled, multi-center clinical study evaluating synthetic squalamine in people with PD. The study will enrol 50 patients over a 9-to-12-month period (Click here for the press release).

6 thoughts on “The Dogfish solution for Parkinson’s”