Late last year, the tech giant Apple released yet more new versions of their phones and watches (with much fanfare). And before we continue: this is not an advertisement or endorsement (unless Apple wants to talk to me???… ).

Of interest was the new version of their watch, which has a handy feature of being able to tell you when you have fallen over (a warning that one was about to fall would surely be more useful, no?).

Useful feature, but those buttons are rather close for anyone with a tremor. Source: ATT

And much was made about the ability of the watch to monitor heart rate, which is a very clever trick, particularly for people with atrial fibrillation (periods of abnormal activity in the atrials of the heart) – although there appear to a few issues to be ironed out (Click here to read more about this).

Many of these smart watches and wrist band monitoring gadgets can now detect heart rate, but monitoring of blood pressure would actually be more useful for the Parkinson’s community.

What does blood pressure have to do with Parkinson’s?

Orthostatic hypotension is one of the most common symptoms of autonomic dysfunction in people with Parkinson’s.

What does any of that mean? 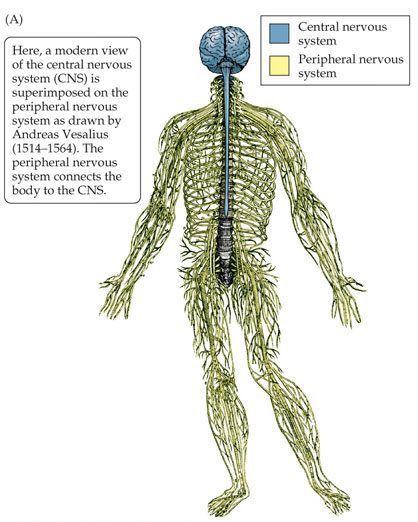 The somatic nervous system is the second of those two branches of the peripheral nervous system. It is involved with sensory feedback to the brain (think taste, smell, touch) – things that we are consciously aware of. The autonomic nervous system, on the other hand, regulates important bodily functions that we are largely unconsciously of (such as the heart rate, pupil constriction and dilation in the eye, digestion, respiratory rate, etc).

Dysfunction in the autonomic nervous system is a very common feature of Parkinson’s (Click here for a review of this topic).

And what about Orthostatic hypotension? 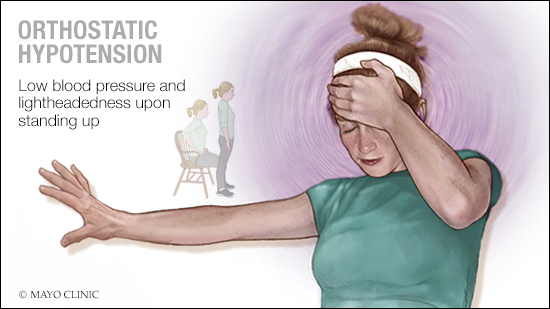 What is systolic and diastolic blood pressure?

We often talk about a heart beat as a singular event, but there are multiple phase to a heart beat and each of them can be measured and analysed. When your heart is ejecting blood out into the arteries – the last stage of a heart beat – this specific phase is called a systole. The phase in between systoles is called a diastole. 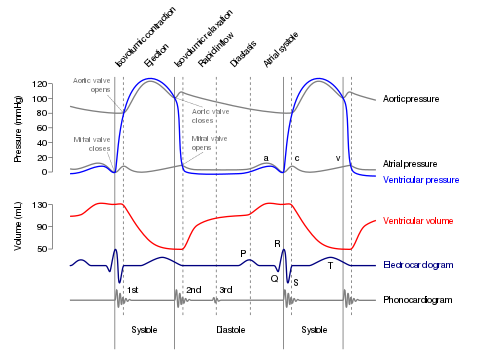 And orthostatic hypotension is common in Parkinson’s?

Orthostatic hypotension has been recognised as a common complaint associated with Parkinson’s for some time. It is nothing to panic about, but it is good to be aware of.

And it is an area of considerable research.

But most of the research has been limited to clinical settings due to technological limitations. We simply haven’t had good blood pressure monitors that can be used continuously outside of the clinic.

There have been some efforts to correct this situation, for example this study:

In this study, the researchers recruited 37 people with Parkinson’s and 44 people with “other diseases”, and monitored them every 30 minutes for 24 hours using a blood pressure monitoring system mounted on an upper arm of the participant. 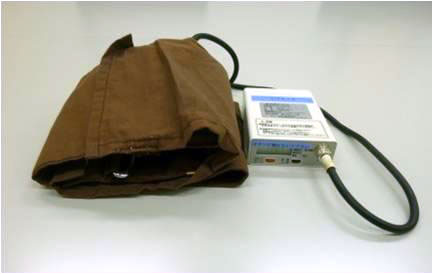 The researchers found that the average systolic blood pressure levels and the number of participants who exhibited hypotension did not different between the two groups. This may be due to the lack of continous monitoring – measures were only taken every 30 minutes.

Interestingly though, the occurrence of hypertension during the evening, blood pressure fluctuations of over 100 mmHg during the day, and generally blood pressure over 200 mmHg were observed significantly more frequently in the participants with Parkinson’s than in the “other diseases” control group.

So will the next Apple watch be able to monitor blood pressure?

But a wrist based system would not give very accurate measures of blood pressure.

The closer you can get to the action – the heart – the better. The best and most accurate clinical method is rather invasive – involving a catheter being inserted into a blood vessel in a patient’s arm, neck or groin and then guiding it to the heart.

I see. So the best we can do for Parkinson’s at present is still the upper arm?

Weeeell, there is an alternative being developed.

In this study, the researchers wanted to develop a non-invasive approach for continuous monitoring of central blood pressure. And what they devised was ingenious.

They had previously published this report:

In this study, the investigators reported on the invention of an ultra thin (240 μm) membrane-based, stretchable (with strains up to 60%), ultrasound probe that can conform to any shape and provide imaging or monitoring (with a high signal-to-noise ratio, a wide bandwidth, and a high spatial resolution.

The probe is made of a silicone polymer with an array of electronics fused into it. Each component is connected to others via “squiggly” metallic wires which aid in the stretchablity of the device. The array of tiny ultrasound transducer “islands” work together to emit ultrasonic waves and to capture them bouncing back from the object being monitored.

Apologies to readers hoping for a more extensive explanation of how this work beyond that, but I am not going to spend the next half hour trying to explaining each and every detail (those that I understand at least) – if you would like more information about how it works I would recommend that you read the report or watch this handy video:

What is really impressive about this technology though, is that it conforms to different shaped surfaces and still works (ok, the fact that something so small actually works in the first place is pretty mind blowing as well!).

And this feature got the researchers very excited and thinking about various applications.

The monitoring of blood pressure was not mentioned in the first report (which described the invention), but it must have been an early idea with regards to applications when they began brainstorming how this technology could be used.

And in the follow up ‘Nature Biomedical Engineering’ report, the researchers have applied this stretchable ultrasound monitoring technology to the matter of monitoring blood pressure.

And here is an example of what is would look like: 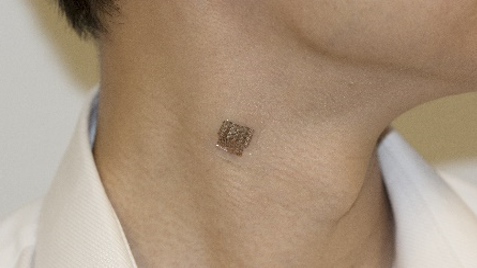 This is the very definition of a non-intrusive wearable (but please be aware that a good power source is still missing).

And the researchers have tested it on different regions of the body, and assessed it against commercially available devices, and the results look very encouraging. 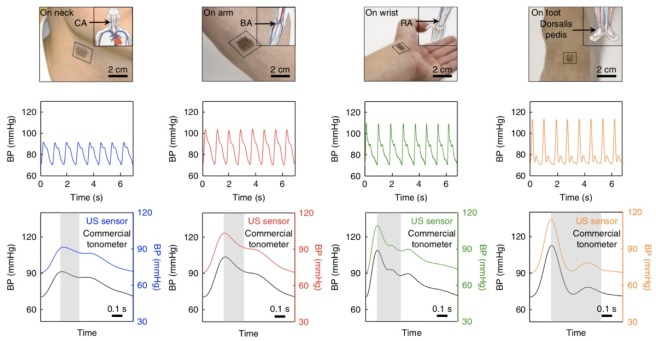 The device can measure blood pressure in vessels over an inch (4cm) deep. It basically measures how much a blood vessel expands in its width from one heartbeat to the next, and this expansion can be converted into a blood pressure reading (via a computer algorithm – see image above). In addition, a waveform of the expansion and contraction of the blood vessel can be produced, providing cardiologists with an additional tool.

How could this technology be used in Parkinson’s?

In late 2017, this clinical study was reported:

It was a pilot study, the researchers recruited 10 people with Parkinson’s (average age 69 years) for a double blind, placebo controlled, cross-over design study. The objective of the study was to assess how nicotine gum affects low blood pressure in PD. The participants were given either nicotine gum (4 mg) or placebo gum on two separate days and their blood pressure was recorded every 10 minutes for 90 minutes. The gum was chewed for 30 minutes on both days (Click here to read more about the design of this study).

But this study was conducted under very stict clinic conditions – due to the equipment used to measure blood pressure.

Surely it would be more interesting and useful to measure blood pressure over a longer period of time – and in a real world environment – using a technology like the stretchable probe.

Is there much clinical research investigating blood pressure issues in Parkinson’s?

There are a number of biotech firms developing treatments to improve quality of life for people with Parkinson’s suffering from blood pressure-associated complaints.

The clinical study is a Phase III, 4-week, multi-center, randomised study of TD-9855 for treating symptomatic neurogenic orthostatic hypotension in 180+ people with Primary Autonomic Failure. People with Parkinson’s will be recruited to that study (Click here to read more about the details of this study).

Imagine the possibility of continuous monitoring individuals in that study with a simple ‘sticky plaster’-like device on their necks? How easy it would be to measure blood pressure in real world situations.

Rislenemdaz (aka CERC-301, MK-0657) is an orally-active, selective NMDA receptor subunit 2B (NR2B) antagonist, which is being developed for the treatment of orthostatic hypotension.

The company very recently announced positive interim results from their Phase I study of Rislenemdaz. The study involved participants receiving a single dose of CERC-301 which escalated (8mg, 12mg, 16mg, or placebo) over 4 study visits. All of the doses tested were safe and well tolerated, and there were no serious adverse events reported. In addition, all doses showed clinically meaningful increases compared to placebo treated individuals (within the 6-hour post-dose timepoints – click here to read the press release about the study).

Again, it would be interesting as this clinical trial programme progresses to see more real-world, longitudinal measures such as the ultrasound probe potentially being incorporated in the studies.

Every so often on the SoPD, we like to have a look at new technology and alternative methods of potentially monitoring Parkinson’s (Click here, here, here, here and here to read previous examples of these kinds of posts).

At the SoPD, the main requirements of the any potential measure of PD is that it must be non-intrusive, semi-continuous and require little or no input/effort from the person being assessed. This will hopefully provide a more accurate measure of the condition compared to what we currently have available.

Alterations in blood pressure are a common, under recognised feature of Parkinson’s. As I said above, it is nothing for folks to start stressing about, but it is good to be aware of. And there are many efforts to find therapies that can help in better controlling this complaint.

A new method of better monitoring of blood pressure has recently been proposed. The researchers will need to devise a smart method of powering the probe before it will be available for real world use, but as a first step this miniature ultrasound devise is rather remarkable.

It is also perhaps another sign of better things to come.

The banner for today’s post was sourced from bendigoufs

3 thoughts on “Monitoring Parkinson’s: Under pressure”