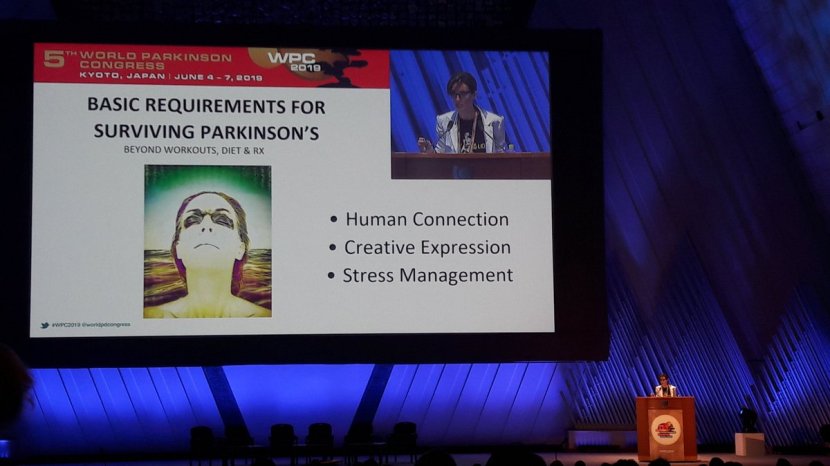 She noted that “research by Dr Laurie Mischley shows the single biggest determinent of Parkinson’s progression is loneliness”. 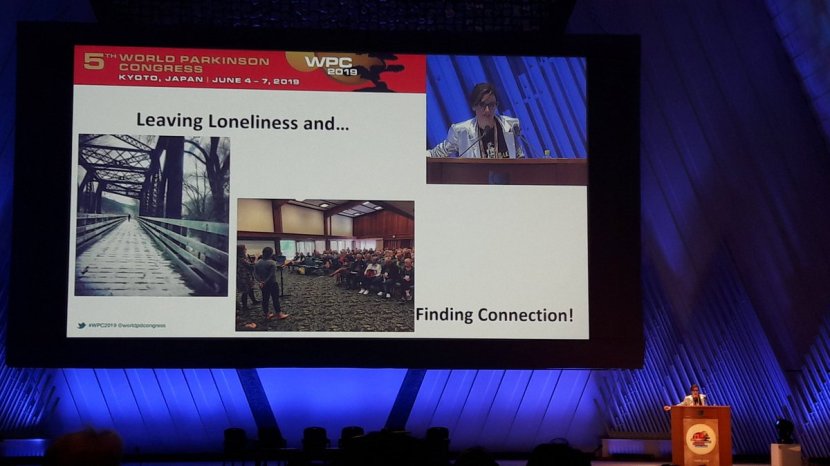 It was an inspiring, ‘mindset-changing’ talk. A great way to start the morning.

Next up was Prof Jeff Kordower (Rush University), and he was speaking about the abnormalities occuring outside of the brain in Parkinson’s:

Prof Kordower covered a lot of ground in his presentation, firstly exploring the research surrounding alpha synuclein protein aggregation in non-brain regions of the body – particularly the tissue surrounding the intestinal system. He noted the discrepancies in colon biopsy analysis research over the years – acknowledging differences in results.

He also discussed how inflammation in the gut appears to increase risk of Parkinson’s (from the human inflammatory bowel disease data (Click here to read a previous SoPD post on this topic) to how removing Toll-like receptor 4 (or TLR4) in mice reduces severity of PD model (Click here to read more about this).

Then he moved on to the hot topic of microbiota of the gut – the bacteria that inhabit our gastrointestinal system.

He wisely emphasised the fact that many different conditions are associated with dysbiosis (not just Parkinson’s), and different regions of the gut are inhabited by different bacteria, which makes the analysis of the entire system difficult when all you have is fecal analysis.

But he also discussed data supporting a close connection between the microbiota of the gut and Parkinson’s. And here he discussed the “Sampson paper” which explored how the gut microbiota can regulate motor deficits and neuroinflammation in models of Parkinson’s – (Click here to read that paper and click here to read a previous SoPD post about it).

Then he shifted to the research from the Van Andel Institute suggesting that removal of the appendix can influence risk of developing Parkinson’s (Click here to read a SoPD post on this topic).

Interesting talk, and a lot of compelling arguments for (and against) the role of the gut in Parkinson’s. A lot of food for thought.

Prof Kordower was followed by another heavy hitter: Prof Per Borghammer.

His talk was primarily focused around people with REM sleep behaviour disorder, which involves acting out one’s dreams (literally bouncing around on the bed) and it is generally considered a precursor to Parkinson’s.

Prof Borghammer uses different methods of imaging in his research:

But recently he has been conducting some very interesting studies, by applying these imaging methods to people with recently diagnosed Parkinson’s, but without REM sleep behaviour disorder. 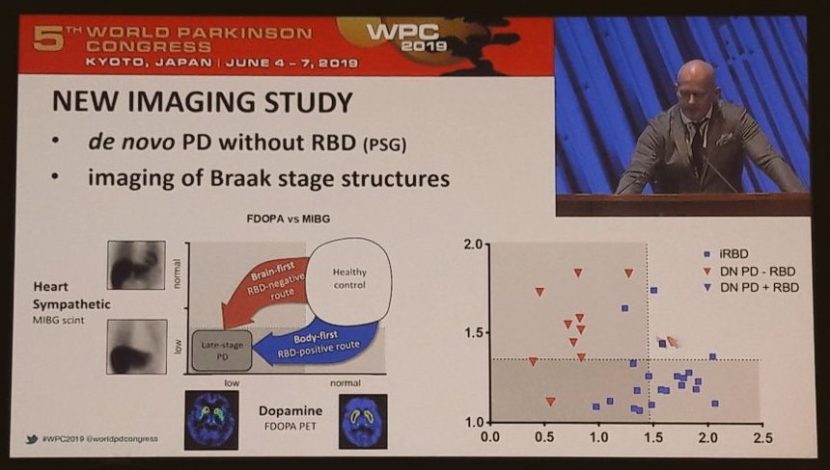 And this research points towards two different populations within the Parkinson’s community. He also provided supporting evidence for this idea from previously published research: 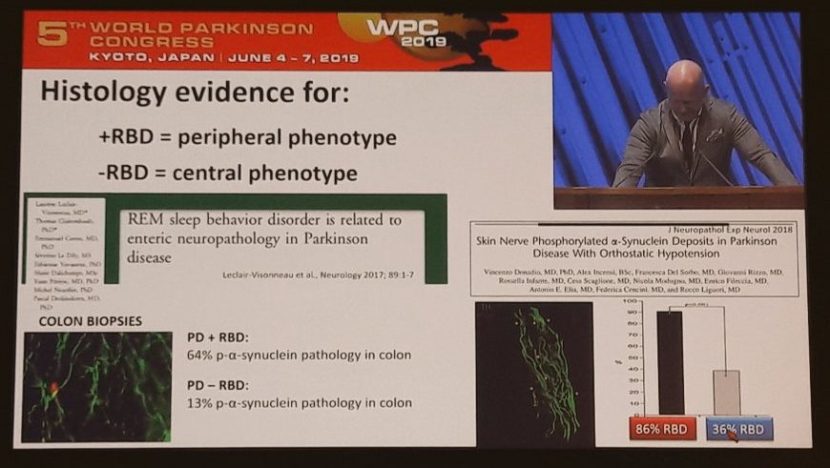 It was a really interesting presentation! And Prof Borghammer has a great review on the topic of the gut and Parkinson’s (Click here to read that review).

The final speaker of the morning session was Prof Lim Shen-Yang, a neurologist and Professor of Medicine at the University of Malaya.

And his talk centred on the broad topic of autonomic dysfunction in Parkinson’s:

Orthostatic hypotension (low heart rate after standing) was the first topic he tacked: 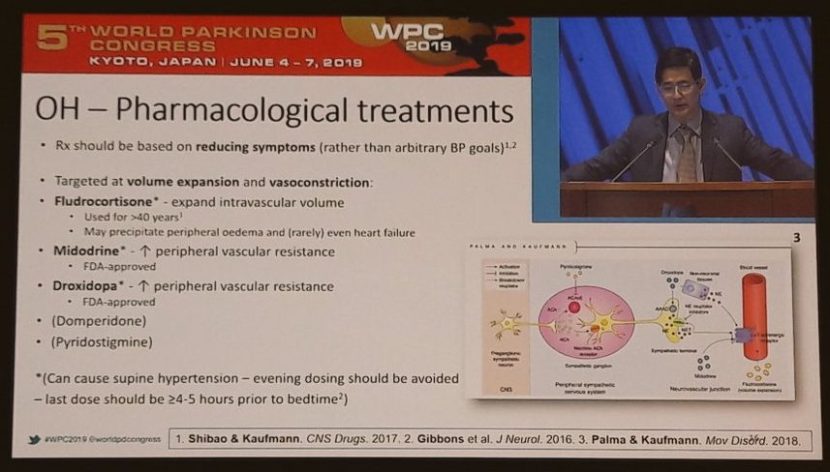 But of particular interest, was his section on overactive bladder issues in Parkinson’s. This is an area of PD that I am aware of, but I have never really investigated. A very common issue for folks with the condition, and Prof Shen-Yang provided an education on the topic. 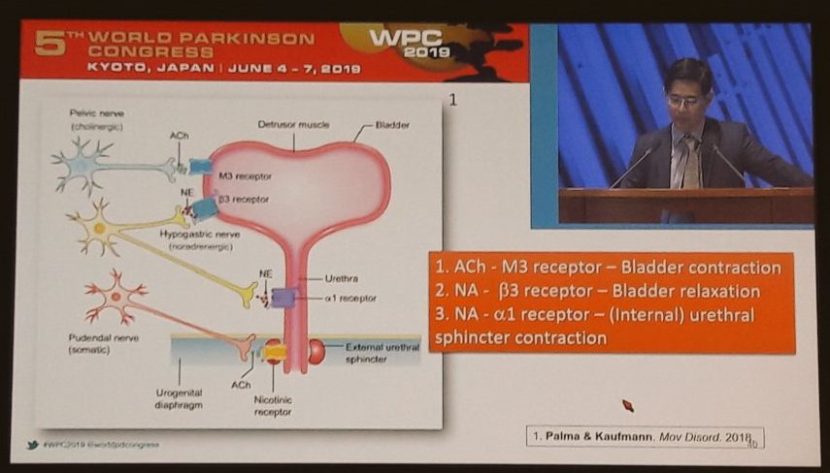 As you can probably tell, I was well impressed with Prof Shen-Yang’s presentation. It was authoratative and informative, and each time he changed topics, there was a whole lot more to learn.

Also of interest, was the influence deep brain stimulation can have on autonomic dysfunction in Parkinson’s: 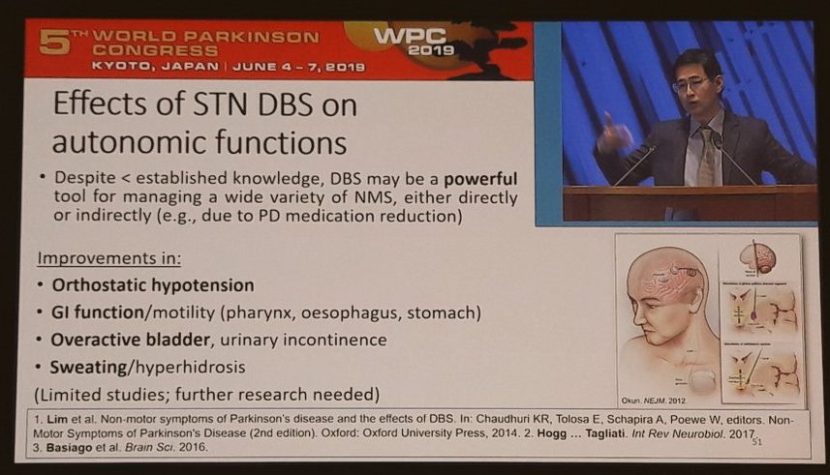 And Prof Shen-Yang finished his presentation, by highlighting a recently published (literally the day before!) overview and characterisation of Parkinson’s in the Western Pacific region:

Click here to read more about that report. Hugely impressive talk by Prof Shen-Yang, and a great way to round off an extremely interesting morning session.

Before letting the presenters escape to lunch, however, there was the Q&A session.

Questions from the audience included:

Is there eveidence for the use of probiotics & fecal transplants?

Answer: Still too early to say, based on our current understanding. We need carefully controlled clinical trials. 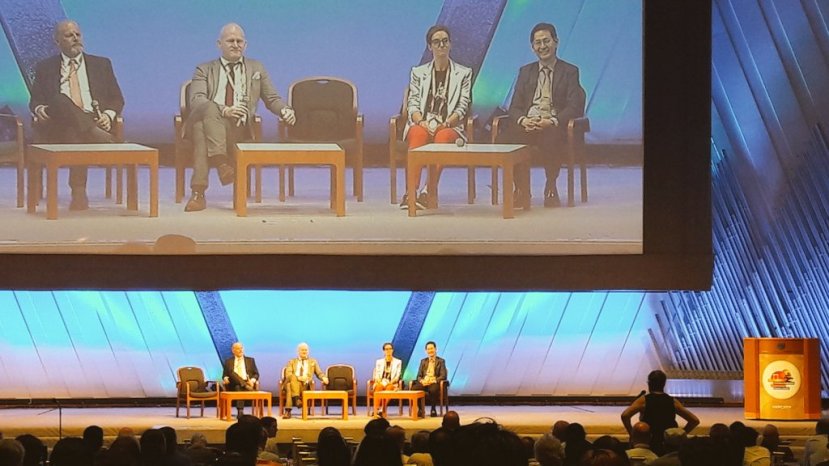 Response from the audience: I can’t wait for the results of a randomised clinical trial of probiotics (which resulted in a cautionary comment from the audience regarding the reckless use of probiotics and fecal transplants (particularly in light of recent FDA news). Obviously more research required here (Click here for an interesting read on probiotics in Parkinson’s).

Question: If the bacteria in the gut are influential in PD, is there potential for the use of antibiotics?

Answer: Gut microbiota is very complicated, and a sledgehammer approach is not a clever idea.

Amazing morning session for the last day of an amazing meeting.

During the afternoon session I was able to catch a really good presentation by Prof Heath Ecroyd from the University of Wollongong in Australia. He was speaking about heat shock proteins.

These are the chaperon proteins that play an important role in correct folding of new proteins and in the response of a cell to stress.

Click here to read a good review on the topic by Prof Ecroyd and colleagues. Prof Ecroyd presented data showing that heat shock proteins can bind to and inhibit the toxic form of alpha synuclein protein.

But he also pointed out that these proteins can be found inside Lewy bodies and despite having these protein people still get Parkinson’s. So why are they failing to prevent the accumulation of misfolded proteins as we age?

Heath suggests that aging is part of the problem. 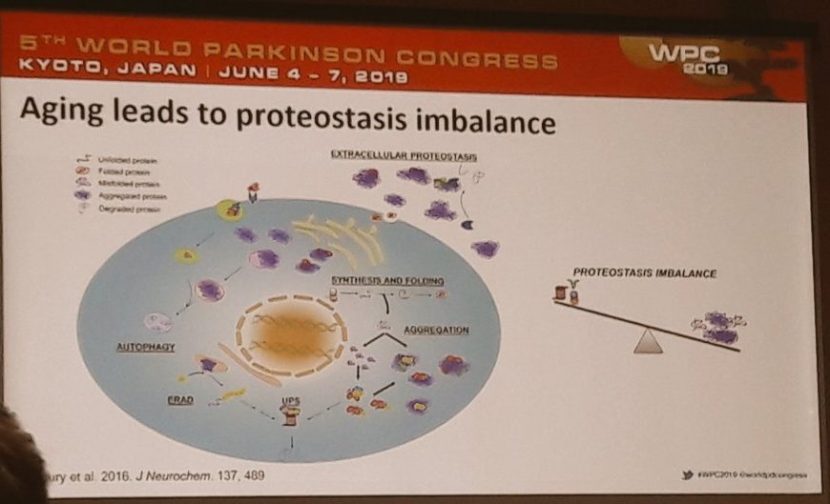 And rather than targeting specific heat shock proteins, he suggested that activating the master regulators of many heat shock pathways might be a better approach to tackling neurodegenerative conditions like Parkinson’s.

He proposed inducers of the major regulator heat shock factor 1.

And he presented data on a drug that we have previously discussed here on the SoPD: Arimoclomol (Click here to read that post). Arimoclomol is believed to be an inducer of heat shock factor 1.

It was a great talk, and it was followed by another Australian speaker: Prof Carolyn Sue from the University of Sydney.

She was speaking about the power stations of cells – mitochondria.

And she was quick to point out the high number of Parkinson’s associated proteins which play a role in mitochondrial related activities: 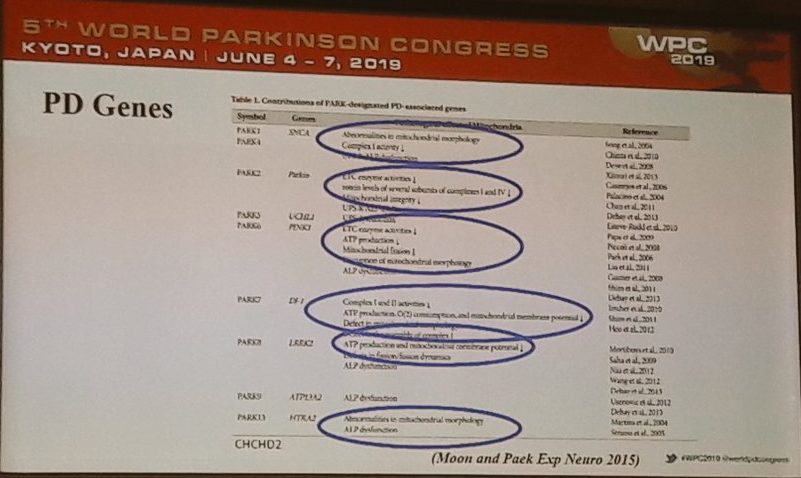 In addition, she spoke about the various ways mitochondria react to stress…

…and how Parkinson’s-associated proteins are involved in those response options: 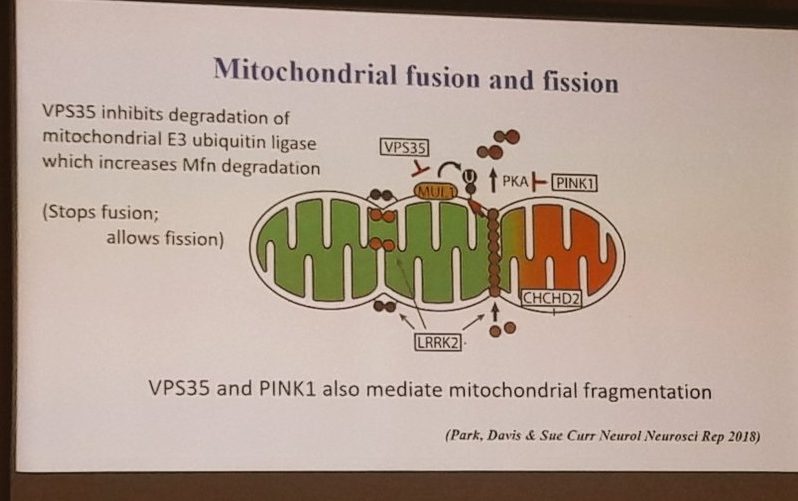 It was a master class in how mitochondria are believed to be involved in Parkinson’s. We have previously discussed Prof Sue’s research here on the SoPD, and for the sake of space I’ll refer you to that post to read more on this topic (Click here to read that post).

Another really fascinating talk on the last day of the meeting was given by Prof Ted Dawson: 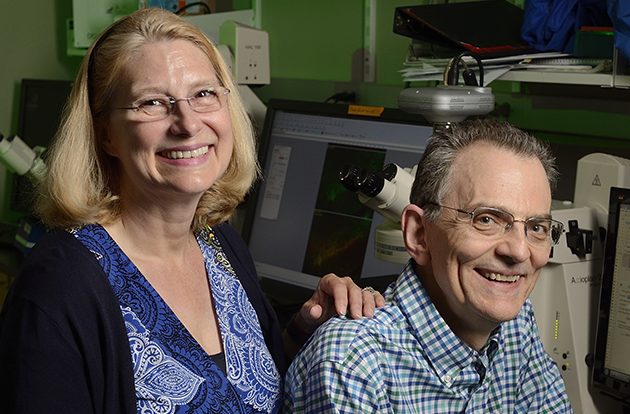 Much of the research he presented is unpublished, so I am reluctant to mention it here (but given that a lot of it is about to be published you can expect a few SoPD posts in coming months).

He did, however, present a great slide highlighting the possible cellular pathways involved in Parkinson’s and the different experimental approaches which are targeting these pathways:

One of the final speakers I watched at the WPC meeting was Dr Dilan Athauda from UCL in London.

He is one of the researchers behind the Exenatide clinical trial program. Here is a Parkinson’s UK video of him from 2016 discussing how drugs like Exenatide are being repurposed for Parkinson’s:

In his WPC talk, Dylan discussed how there appears to be an interplay between diabetes and Parkinson’s: 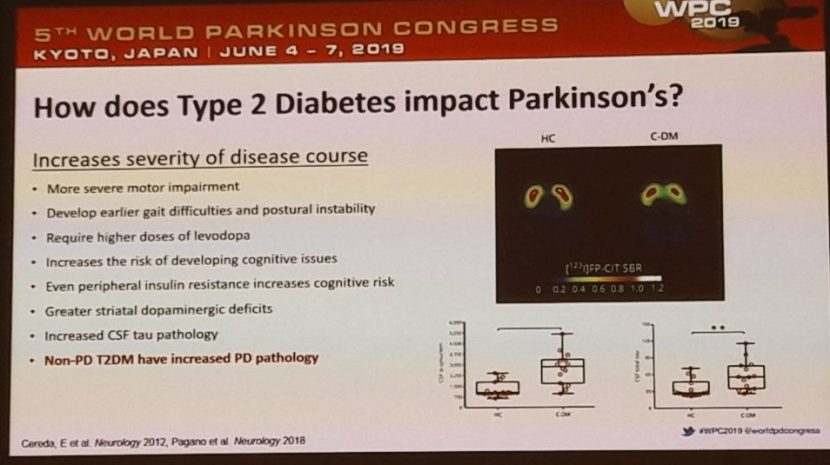 He also spoke about glycation.

Glycation is the non-enzymatic reaction between reducing sugars (such as glucose) and proteins. Glycation is known to affect the conformation and function of proteins. It is a haphazard process, impairing the normal functioning of molecules.

A protein or lipid that has become glycated is called an Advanced Glycation End product (AGE). This video explains this process well:

And in his talk Dylan made a good argument for targeting RAGE in Parkinson’s: 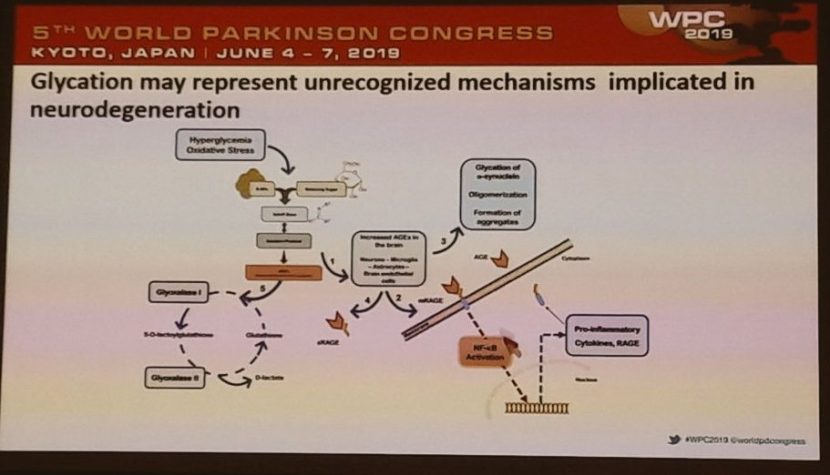 RAGE (or Receptor for advanced glycation endproducts) is exactly what it says on the label – it is a molecule that sits on cell membranes and AGEs bind to it. We have previously discussed this idea of tageting RAGE on the SoPD (Click here to read that post).

Dylan also presented a great theory of how Islet amyloid polypeptide (IAPP, or amylin) protein could be influencing Parkinson’s by interacting with alpha synuclein. He suggested that perhaps IAPP can travel to the brain and bind to alpha synuclein, while the reverse does not happen – which may explain why people with diabetes have an increased risk of Parkinson’s, but people with Parkinson’s do not have an increased risk of diabetes. An intriguing concept. 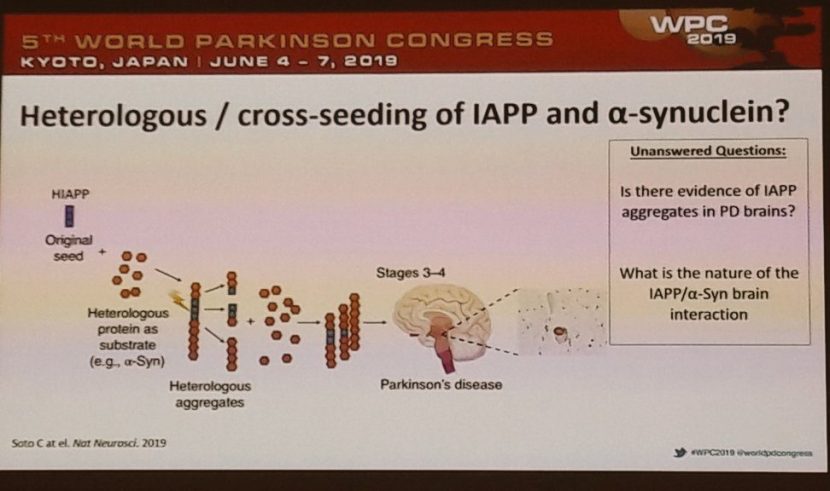 Lots of interesting ideas and theories in this talk and I am curious to see what research Dylan will be producing next.

And that was basically it for the WPC meeting for yours truly.

Key take aways from Day 2. of the WPC meeting:

1. Meeting and overlapping talks have yet again prevented me from seeing a lot of presentations I was hoping to catch. WPC organising committee – please consider recording presentations at the next meeting. Particularly for those who can’t attend the overall meeting.

2. Reviewing the last couple of SoPD posts providing an overview of the WPC meeting, I realise that much of my time (outside of meetings) was focused on catching scientific research presentations rather than ‘patient focused’ activities. The advocate session on Day 0 was really good, but I have the nagging feeling that I have missed an opportunity.

3. I need to get a better camera – some of these photos of slides are too pixelated.

4. A lot of themes are resonating as the meeting ends (Soania Mathur’s message of the need for more patient involvement in the research, Jesse Cedarbaum’s call for more sharing and collaboration between companies and researchers, Bas Bloem’s shifting from doctor-driven treatment to more focus on actual patient needs,… etc).

5. It’s still 3 years away, but I am already looking forward to the next WPC meeting which will be held in Barcelona (Spain).

The hope, of course, is that by the time the Barcelona meeting occurs significant progress will have been made and we will be able to look back at the Kyoto meeting with a sense of fond nostalgia.

And on that thought, let’s get back to the research.

The banner for today’s post was sourced from Singaporego.