We have talked a lot about a protein called Alpha Synuclein on this blog (see our primer page here and our previous post).

It is very closely associated with Parkinson’s disease, given that people with genetic mutations in the alpha synuclein gene are more vulnerable to the condition, AND the protein is a key component in the disease-related circular aggregations (called ‘Lewy bodies’) in the brain. Recently researchers have identified proteins that may be involved with the transfer of Alpha Synuclein between cells – the method by which the disease is believed to be spreading. By blocking or removing these proteins, the researchers have been able to block the transfer of alpha synuclein.

In this post, we will review the research and discuss what this could mean for Parkinson’s disease.

At the recent annual Society for Neuroscience conference in sunny San Diego, Dr Ravindran Kumaran, a neuroscientist in the laboratory of Professor Mark Cookson (at the National Institute on Aging in Bethesda, Maryland) stood up and presented data about an interesting protein that few people in the audience had ever heard of.

Dr Kumaran and his colleagues had systematically removed the function of each gene – one by one – in cell cultures of human cancer cells, and then measured the efficiency of the cells to absorb (or ‘take up’) the Parkinson’s related protein, alpha synuclein. An absolutely laborious task (remember there are over 20,000+ genes), but when they turned off a gene called TM9SF2, something amazing happened:

This caused a bit of excitement in the Parkinson’s research community. Here was a potential method of blocking the spreading of alpha synuclein.

The funny thing is: few people had ever heard of TM9SF2, and yet Dr Kumaran then showed that TM9SF2 is in the top 3% of all proteins present in the brain. In fact, the highest concentrations of TM9SF2 are in the substantia nigra and other brain regions that are most affected by Parkinson’s disease.

So you can hopefully understand why some people in the Parkinson’s research community thought that this was a wee bit exciting.

Plus, this data presentation came on the back of another study that was published in September which presented another protein (called Lag3) that exhibited a similar ability to reduce the absorption of alpha synuclein:

In this study, the researchers conducted a screen of 352 proteins that sit on the membrane of cells. They were measuring the level of alpha synuclein binding. They identified three interesting candidates for further investigation, include lymphocyte-activation gene 3 (LAG3), neurexin 1β, and amyloid β precursor-like protein 1 (APLP1).

When the researchers compared the three, they found that by removing LAG3 less alpha synuclein was taken into the cell (by endocytosis) than the other two proteins. In addition, when they increased the amount of LAG3 that a cell produces, they observed a similar increase in the amount of alpha synuclein absorbed by cells.

Next the researchers investigated the transmission of alpha synuclein between brain cells in both normal cells and cells that had no LAG3, and they found not only that LAG3 is required for the transmission, but the absence of LAG3 reduces the damage caused by the transmission.

Finally the researchers used small proteins (antibodies) to bind to and block LAG3, and they observed less transmission and damage caused by alpha synuclein. In their conclusions, the authors pointed out that LAG3 is not the only protein involved with the transmission of alpha synclein – there will be others – but it represents a potential future target for therapeutic intervention in Parkinson’s disease.

So what does this mean?

If the theory of alpha synuclein – that this protein is passed between cells, causing the spread of the disease – is correct, then any agent that can block that transmission should slow down or halt Parkinson’s disease. We have previously talked about vacines and antibodies against alpha synuclein being tested in the clinic (Click here, here and here for more on this), but blocking TM9SF2 and LAG3 represent a new method of preventing the transmission of alpha synuclein. This is very exciting. The more angles of attack that we have for designing a treatment the better our options. 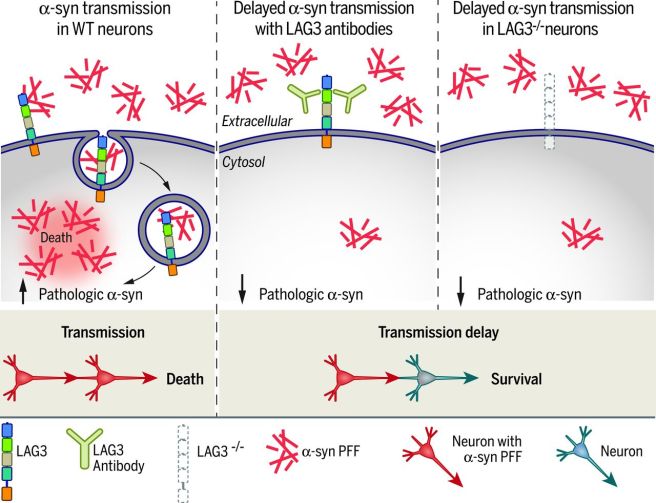 Schematic of how LAG3 may be working. Source: Science

We will be watching the field very closely and will keep you posted as new information comes to hand.

3 thoughts on “A new LAG in Parkinson’s”