The SoPD is at the 2019 World Parkinson’s Congress being held in Kyoto this year.

For the sake of those who are unable to be here, I will endeavour (famous last words coming up) to provide some of my impressions and observations of what is happening at the meeting on each day. We have previously discussed what the World Parkinson’s Congress is (Click here to read that post), so this post is literally just what happened each day.

And this is my first time attending the WPC, so any comments here will be coming from a novice. And I have been told by many individuals that WPC is not like other conferences.

The WPC meeting is being held at the Kyoto International Conference Center.

It is a huge event centre on the north side of the city. There are a number of buildings, with many lecture/presentation halls. The WPC meeting is spread across the complex. 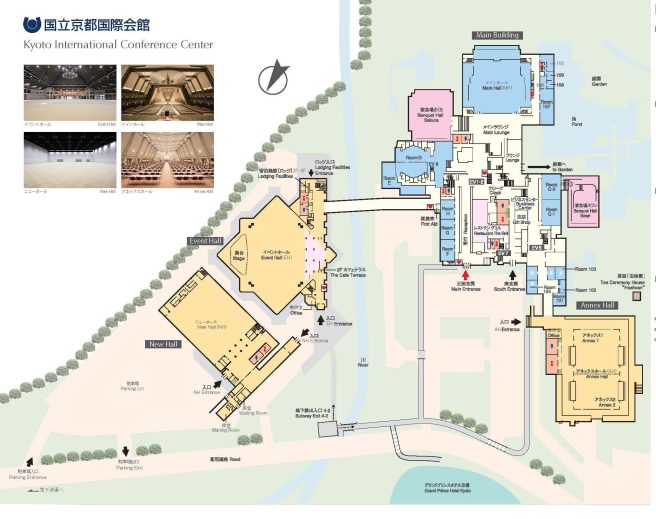 And there are some beautiful gardens surrounding the venue:

Today (4th June) was Day 0 of the congress – the day before everything really kicks off. It involved pre-congress courses during the day, and then the opening ceremony in the evening.

I found myself jumping between rooms early in the day and then parked in the advocacy course in the afternoon.

Some of the morning lectures were really interesting, providing overviews on various topics in Parkinson’s. Some of them covered topics that are not often discussed, such as Prof Tim Anderson from New Zealand talking about Parkinson’s and dizziness.

Also impressive was Prof Lim Shen-Yang who gave not one, but two talks today – with the second one focusing on autonomic issues associated with Parkinson’s.

I found the advocacy session particularly interesting though.

They then came back together for a combined Q&A panel session to finish off the afternoon. There were lots of questions during this final part.

First impressions of the meeting overall:

1) An amazing venue for a conference – the building is a curious piece of architecture, the gardens are amazing, and there are birds in the bathrooms (seriously, some of the bathrooms have bird songs being played over speakers; it is very relaxing).

2) The best conference lunch ever! I love the attention to detail in Japan, but everyone at the sessions today was impressed with the lunch. It came in a nice little covered bento box:

3) There was a really friendly sense of comradery between attendees – both folks with and without Parkinson’s, but what was really touching were the efforts by people with the condition to help others with Parkinson’s who may have been struggling with some thing. In the audience or in hallways you would see folks helping each other. There was a generous, caring atmosphere that I really liked.

Highlight of the day:

The opening ceremony in the evening!

Hands down. It was spectacular!

It was held in the huge “Main hall”:

And there were keynote presentions for two individuals.

The first was Lyndsey Isaacs – whose late husband was Tom Isaacs (one of the four co-founders of the Cure Parkinson’s Trust). It was a deeply touching lecture.

Lyndsey shared many intimate aspects of living with someone with Parkinson’s, and also spoke of the dangers of burnout (for which she provided some useful advice for partners):

The second keynote talk was given by Dr Linda Olson, who is a truly amazing individual. She lost both legs and her right arm in a traffic accident during her 20s. Then later in life after raising a family, she  developed Parkinson’s. A fascinating life story defined by a determination to overcome obstacles.

There were also dance and singing performances which were remarkable when one considers that the performers (who have Parkinson’s) were coming from different countries and they had practised in isolation.

In fact, earlier today was the first time some of these groups had been able to practise all together.

And the opening ceremony was completed by an energetic performance of Japanese drumming:

After the opening ceremony was completed, the attendees shifted into the event hall and had a meal, while socialising and exploring posters and exhibits.

Overall, it was a very pleasing first day. Exhausting, but fulfilling. And it has left me looking forward to a very exciting day tomorrow as the WPC meeting kicks off properly.

Until then, it is time to get some sleep. More tomorrow – stay tuned.

The banner for today’s post is a photo of the gardens at the Kyoto International Conference Centre.