Another week goes by and yet any potential break-through in world of Parkinson’s disease research.

The pace of the discoveries are coming thick and fast at the moment, and I’ll be honest: I’m having a very hard time keeping up. It’s bonkers! I have so many posts in draft form at the moment, and just when I think I might get one finished there is a new research report being published that demands a post of its own.

Which brings me to the study I’d like to discuss today. And this one is being prioritised with regards to its place in list of pending posts. A large group of researchers from the USA and Norway have just published the results of a project that – I think you’ll agree – are very interesting: 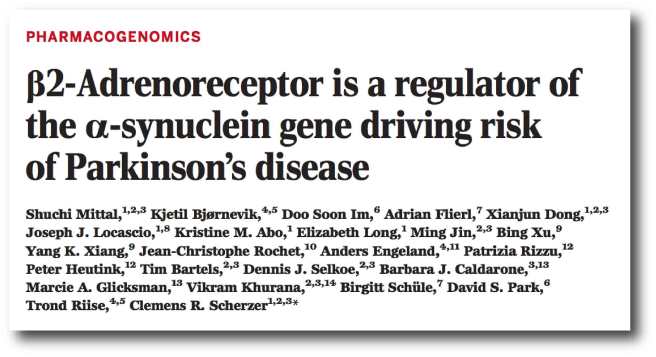 The researchers who conducted this study began by conducting a massive screening experiment. They wanted to identify drugs that could reduce the production of a protein called Alpha Synuclein (regular readers will be aware that that protein is intimately associated with Parkinson’s disease). So the investigators grew cells that stably produce the human version of Alpha Synuclein and they screened 1126 compounds (including drugs approved by the U.S. Food and Drug Administration (or FDA) as well as wide range of natural products, vitamins, health supplements, and alkaloids.

From this screen they identified 35 compounds that lowered Alpha Synuclein levels by more than 35%. Amongst these 35 compounds was the selective Beta2-Adrenoreceptor agonist metaproterenol. Because metaproterenol is not brain penetrant – meaning that it can not pass through the protective blood-brain-barrier membrane surrounding the brain – the investigators added six related drugs, including the two selective Beta2-Adrenoreceptor agonists, clenbuterol and salbutamol (which are both brain penetrant).

Hang on a second, what are Beta2-Adrenoreceptor agonist?

As I mentioned in the previous post, an agonist is a drug that binds to and activates a particular receptor.

On the surface of a cell, there are lots of receptors which act as switches for certain biological processes to be initiated. Receptors will wait for a protein to come along and activate them or alternatively block them. The activators are called agonists, while the blockers are antagonists. 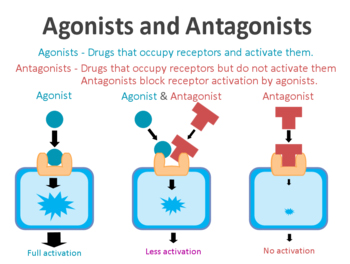 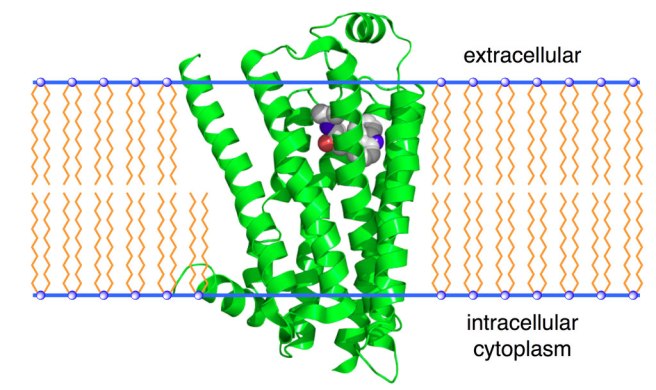 And what medical conditions are treated with Beta2-Adrenoreceptor agonists?

Ok, so these researchers found Beta2-Adrenoreceptor agonists reduce the production of Alpha Synuclein in their screening experiment?

One other interesting compound that the screen also highlighted was a drug called Riluzole. This is an FDA-approved drug for modification of amyotrophic lateral sclerosis (ALS), but it has also been shown to reduce dopaminergic neurodegeneration and provide neuroprotection in a rat model of Parkinson’s disease (Click here to read more).

The researchers next injected some mice with Beta2-Adrenoreceptor agonists and then looked at the dopamine neurons in the brain, and they found that those cells also produced less Alpha Synuclein. Interestingly, they also noted that in mice that did not have any Beta2-Adrenergic receptor, the levels of Alpha Synuclein in the brain were twice as high as normal.

Interesting. But is this relevant to humans?

Well, having established that Beta2-Adrenergic receptor activation reduces Alpha Synuclein levels, the researchers next turned their attention to what is happening in people that have been treated with Beta2-Adrenoreceptor agonists. To do this, the researchers used the Norwegian Prescription Database which contains the complete records of all prescribed drugs dispensed at pharmacies to every individual in Norway since 2004.

But (and it’s a BIG ‘but’), the researchers also asked the reverse question: does blocking Beta2-Adrenergic receptor (with an antagonist drug) increase one’s risk of developing Parkinson’s disease?

And guess what they found?

Propranolol is often called a ‘beta-blocker’ because it blocks the Beta2-Adrenergic receptor. This Beta2-Adrenoreceptor antagonist is commonly used to treat high blood pressure and essential tremor. In their analysis, the researchers found that Propranolol was associated with a two-fold increase in the risk of developing Parkinson’s disease!

As you can see from the image above, those individuals who took a high defined daily doses (DDD) of Salbutamol (the red line on the left graph) had a lower risk of developing Parkinson’s disease than those who were administered low levels of Salbutamol (the green line – which does not differ from the general population level of risk (blue line)). And on the graph on the right the 9,339 individuals treated with Propranolol (green line) had a higher risk of developing Parkinson’s disease than the general population.

I am currently taking Propranolol! Should I stop?

While I usually do not like to give advice on this website, if you are concerned about this finding it may be wise to ask your doctor whether there are any alternative medications available (especially if you have a family history of Parkinson’s disease).

And although it is a rather staggering result, I will be very interested to see if the same trends are observed in the other big Scandinavian medical databases maintained in Denmark and Sweden. Until the finding is replicated independently we shall wait and see.

Wow. This is interesting. What did the researchers do next?

Next the researchers investigated whether Beta2-Adrenoreceptor agonist (Clenbuterol) treatment could rescue two different mouse models of Parkinson’s disease, and they observed significant levels of neuroprotection of the dopamine neurons in mice after Clenbuterol treatment.

And finally the researchers tested Beta2-Adrenoreceptor agonists on human dopamine neurons in cell culture. The dopamine neurons were generated from human IPS cells (which are stem cells derived from skin cells – Click here to read more about this). The IPS cells were collected from people with a particular type of Parkinson’s disease, which results from having too many copies of the Alpha Synuclein gene (three copies!). These individuals have increased risk of developing Parkinson’s disease. The researchers found that Beta2-Adrenoreceptor agonist (Clenbuterol) treatment resulted in lower levels of Alpha Synuclein in these cells and it also improved mitochondrial function and survival in these cells.

The researchers completed the study by concluding that Beta2-Adrenergic receptor activation reduces levels of Alpha Synuclein and the risk of Parkinson’s disease “and constitutes a potential target for therapies”.

Very interesting! Have Beta2-Adrenoreceptor agonists ever been tested in the clinic before?

That’s the good news: Yes, they have:

In this study, the Japanese investigators recruited 9 subjects with Parkinson’s disease and gave them the Beta2-Adrenoreceptor agonist Salbutamol (6 mg daily) for two weeks. They found that co-administration of salbutamol with Levodopa significantly increased the mean daily total ‘on’ phase (from 8.3 hours to 9.8 hours – ‘on’ phase being the period of normalised movement). But the researchers did raise one concern: the agonist “can sometimes induce or aggravate postural tremor in Parkinsonism – indeed one patient in our study complained of postural tremor after salbutamol“.

Despite this positive result, the researchers never followed up the study (as far as I can tell). But that didn’t matter, because others were also testing salbutamol in people with Parkinson’s disease as well:

In this study conducted in Philadelphia, the researchers administered Salbutamol to 6 people with Parkinson’s disease for 5 days. Five of those subjects demonstrated some improvements in particular movement tasks (such as a 30% increase in finger tapping), but there was little or no change in the levels of rigidity or the severity of resting tremors. Curiously, the improvements were also maintained over time with continued Salbutamol treatment (2mg x 3 per day).

A third group of researcher found that Beta2-Adrenergic receptor activation helps with Levodopa treatment in animal:

Given this interesting result in animals, the researchers next wanted to look at what happens in humans, which resulted in this research report:

In this open-label study, 8 people with Parkinson’s disease but not experiencing dyskinesias underwent 14 weeks of treatment with Albuterol (aka Salbutamol – 4 mg x 4 per day). After this treatment, UPDRS motor scores improved by 9.8% and finger tapping improved by 7.6%. Four of the participants had a mild global improvement, and 3 of them chose to continue Albuterol beyond the termination of the study. Of note, however, is that the mean heart rate of all the participant increased from 78.3 beats/minute to 85.6 beats/minute, which is a known side effect of Beta2-Adrenoreceptor agonist treatment.

Are there any other side effects to Beta2-Adrenoreceptor agonist treatment?

Tachycardia – which is a heart rate that exceeds normal levels – is the main side effect of this class of drugs. Thus anyone with a history of heart issues should be weary of considering these drugs. There have also been reports of excessive sweating, anxiety, insomnia, agitation and (I kid you not) tremor.

In the wake of the recent Exenatide results, it would be very easy to get overly excited as we are suddenly confronted with another clinically available drug that may have beneficial effects on Parkinson’s disease. But while it appears that Exenatide is doing something in Parkinson’s disease based on the 60 person phase II clinical trial results that were recently released (Click here for more on this), it is not clear that Beta2-Adrenoreceptor agonist are having an impact on the condition.

What we have here is an interesting biological effect (reduced levels of a Parkinson’s-associated protein, Alpha Synuclein), a very curious correlation in Norway, and a series neuroprotective studies suggesting that this class of drugs is worthy of further investigations. The small clinical studies that I mentioned above are exactly that: small. Too small in fact to conclude very much (other than Beta2-Adrenoreceptor agonist appear to be safe in PD subjects). All of these results need to be independently replicated before proper conclusions can be made.

Thus, readers should not be rushing to their doctors and demanding for an asthma inhaler.

Dr Clemens Scherzer – one of the researcher who conduced the new study – suggests that it would be wise to try to refine the Beta2-Adrenoreceptor agonist compounds, to make them more effective at reducing levels of Alpha Synuclein. This process would also give us an opportunity to further research this potential therapeutic pathway. Such a refined drug could then be taken to the clinic and perhaps be firstly tested on people with Parkinson’s disease that involve genetic triplication of the Alpha Synuclein gene.

EDITORIAL NOTE: The information provided by the SoPD website is for information and educational purposes only. Under no circumstances should it ever be considered medical or actionable advice. It is provided by research scientists, not medical practitioners. Any actions taken – based on what has been read on the website – are the sole responsibility of the reader. Any actions being contemplated by readers should firstly be discussed with a qualified healthcare professional who is aware of your medical history. Please speak with your medical physician before attempting any change in an existing treatment regime.

The banner for today’s post was sourced from Bookmartialarts