This week we received fantastic news from the coordinators of the UK RECOVERY Trial that they have identified an agent that appears to have a significant impact on improving survival for individuals affected by COVID19 infections.

The RECOVERY (Randomised Evaluation of COVid-19 thERapY) trial – launched across 175 NHS hospitals in the UK in March – is one of the world’s largest randomized, controlled trials for coronavirus treatments (Click here to read more about this details of the trial). The study currently has more than 11,000 patients enrolled and it is evaluating 6 agents for their ability to combat the COVID-19 virus, SARS-CoV-2.

This week the researchers conducting the study announced that the corticosteroid dexamethasone – a medicine that reduces inflammation by mimicking anti-inflammatory hormones produced by the body – was able to reduced the risk of dying in infected individuals (on receiving oxygen therapy but were not on ventilators) by 20%. The agent had no effect on people with less severe cases of COVID-19.

It is a remarkable achievement – involving 2,100 patients who received the drug at a low-to-moderate dose of 6 milligrams per day for 10 days and were compared against approximately 4,000 patients who received standard care for the coronavirus infection (UPDATE 22/6/2020: a manuscript of the result is now avaiable – click here to read it).

Yeah, it’s brilliant. But what does this have to do with Parkinson’s?

Well, very recently dexamethasone has been identified as potentially having an effect on another medical condition.

Care to take a wild guess as to which condition that might be?

In this study, the researchers were interested in using “Watson” to identify potentially disease modifying therapeutics for Parkinson’s.

Named after IBM’s founder and first CEO, industrialist Thomas J. Watson, the Watson supercomputer combines artificial intelligence and sophisticated analytical software to perform “question answering” processes. The system and its data are self-contained in a space that could accommodate 10 refrigerators, and processes at a rate of 80 teraflops (trillion floating point operations per second – yeah, I don’t know what that means either, but it sounds like an impressively high number).

Developed in the early 2000s, the really impressive feature of Watson is its ability to answer questions posed in natural language, which was on display when in January 2011 it won a special episode of Jeopardy! against two of the most successful contestants on the show, Ken Jennings and Brad Rutter.

For those interested in learning more about Watson, this video provides a nice overview of how it works:

The researchers in Toronto wanted to use Watson’s amazing computing power to screen medical databases and to rank 620 drugs in the Ontario Drug Benefit program. They asked Watson to “text mine” research abstracts on the biomedical search engine called Pubmed.

Specifically, they instructed Watson to rank drugs based words and phrases that co-occur with Parkinson’s-associated alpha-synuclein protein aggregation.

This huge search gave the researchers 15 drugs of interest, which they then screened a second time in a case-controlled study using health administrative databases in Ontario (Canada).

Ontario has a population of 14 million people, who are all covered under universal health insurance. The researchers looked at the medical records of everyone (aged 70-110 years) with a diagnosis of Parkinson’s between April 2002-March 2013. They compared this group with a control sample that were randomly selected from the individuals with no previous diagnosis of Parkinson’s.

This analysis demonstrated that the blood pressure medication Propranolol – a beta blocker – was significantly associated with Parkinson’s, which was not really surprising as this association has been reported previously (Click here to read a SoPD post covering this topic).

It also highlighted a number of drugs that were significantly not associated with Parkinson’s.

These included the urate lowering medication allopurinol (which the researchers suggested was “consistent with the known association of PD with lower levels of serum uric acid” – Click here to read more about this) and the cholesterol lowering drugs fenofibrate and lovastatin (Click here to read a previous  SoPD post about cholestrol and PD).

But the agent most significantly not associated with Parkinson’s in this analysis was dexamethasone.

Interesting. How does dexamethasone work?

Dexamethasone is a type of corticosteroid medication that is used as an anti-inflammatory treatment. More specifically, it is an agonist of the glucocorticoid receptor (GR in the image below). 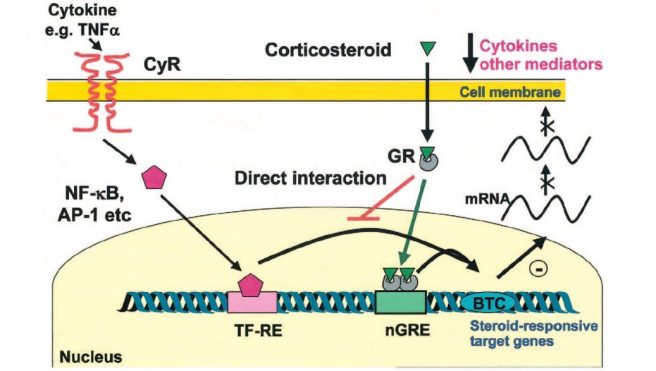 As a result of these actions, this drug is used in the treatment of many conditions, including allergic disorders, skin conditions, ulcerative colitis, arthritis, lupus, psoriasis, or breathing disorders.

Interesting. Is this the first time this has been reported?

Title: Immunosuppressants and risk of Parkinson disease
Authors: Racette BA, Gross A, Vouri SM, Camacho‐Soto A, Willis AW, Nielsen SS
Journal: Annals of Clinical and Translational Neurology; EPUB early release
PMID: 30009205                 (This report is OPEN ACCESS if you would like to read it)

In this study, the researchers reanalysed the collected prescription data from the database of United States Medicare beneficiaries age 60–90 in 2009. They were looking for any immunosuppression medication and comparing its use with the incidence of Parkinson’s within their dataset. And to make the data more interesting and informative, the investigators broke the immunosuppressant medications down into six categories, which were:

Of these groups, two were significantly associated with a lower risk of PD:

This study suggested that people who had been prescribed IMDH inhibitors had 1/3 less incidence of Parkinson’s.

Researchers are now exploring why it is that these drugs involved with immunosuppression have such a powerful effect on the incidence of Parkinson’s.

Any ideas on why they might be having an effect?

Speculation is that suppressing the immune system specifically effects T-cells activity which could be mediating the protective effects against Parkinson’s (Click here to read a previous SoPD post on T-cells).

You shouldn’t and No.

Thus, while dexamethasone might be useful in the short-term treatment of really severe cases of COVID-19, it is probably not a likely long-term treatment for a chronic condition like Parkinson’s. Low dose approaches have been tested in preclinical models of PD, but with limited success (Click here to read an example).

So no dexamethasone trial for Parkinson’s then?

It is probably unlikely, but there is another anti-inflammatory drug that is about to begin being clinically tested for Parkinson’s here in the UK.

Researchers at Cambridge University will be testing the immunosuppressive medication, azathioprine, in people with Parkinson’s. The trial – being called the AZA-PD study – will involve 60 participants who will randomly be assigned to either azathioprine or a placebo treatment (Click here to read more about this trial).

And azathioprine is not the only anti-inflammatory drug being proposed for clinical trial in Parkinson’s. For example, the biotech firm Inflazome has recently complete Phase 1 testing a NLRP3 inhibitor called Inzomelid (Click here to read more about this). The company is now planning Phase 2 clinical trials of this experimental therapy, with plans to test it in a Parkinson’s cohort (Click here to read a previous SoPD post on this topic).

A couple of readers have emailed me asking about dexamethasone following the RECOVERY trial announcement. While there is evidence suggesting that it could be reducing risk of developing Parkinson’s in some individuals, there is currently no data to suggest that it could have an impact after someone is diagnosed, and chronic use of this medication is associated with severe side effects which reduce its potential use in PD.

Dexamethasone belongs to a wider class of drugs that have anti-inflammatory and immunosuppressant activities. They reduce the immune systems ability to do its job (which is to protect us from all of the various pathogens out there in the big bad world). These types of drugs are typically used when the immune response has become exaggerated and needs to be dampened down. But their use can leave us vulnerable to infection, and thus should not be used outside of carefully monitored clinical situations.

A new clinical trial is going to evaluate whether an anti-inflammatory drug can slow the progression of Parkinson’s. If it can achieve this goal, it will provide proof of principle for a novel approach for treating Parkinson’s, and hopefully lead to better, more targetted drugs being developed that will be more tolerable than dexamethasone for longer term treatment.

EDITOR’S NOTE: The author of this blog is an employee of The Cure Parkinson’s Trust, which is a supporter of the AZA-PD study. The Trust has not asked for this material to be produced. The author simply thought it would be of interest to the reader.

One thought on “Dexamethasone for Parkinsons? Not so elementary my dear Watson”