Lysosomes are a key component of the waste disposal/recycling system of our cells.

They are small bags that are full of digestive enzymes that help to break down material inside of cells. Sometimes that material is newly imported from outside of the cell, while other times it may be old proteins that need to be disposed of.

Lysosomes provide the digestive enzymes for the job of breaking down the material. 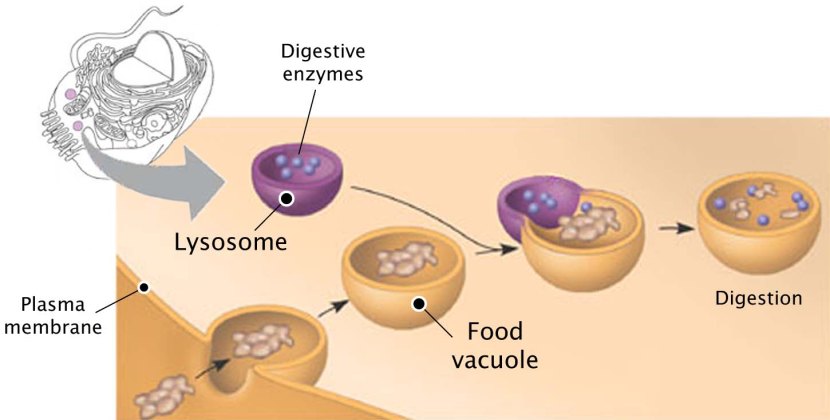 We haver discussed lysosomes in previous posts in more depth (Click here to read that SoPD post) – but understand that they are an absolutely critical component of normal biological function inside of cells.

Got it. What do they have to do with Parkinson’s?

Well, increasingly it is becoming apparent that lysosomes may be playing an influential role in the underlying biology of many cases of Parkinson’s.

This statement is largely based on the observation that a number of the genetic risk factors that increase the risk of developing Parkinson’s are associated with proteins involved in normal lysosomal function.

In fact, a report published in 2017 found that the many people with Parkinson’s also have a genetic risk factor for other lysosome-related medical conditions.

This is the report here:

In this study, the researchers focused their analysis on not on genetic risk factors for Parkinson’s, but rather they went looking for genetic risk factors associated with 54 different lysosomal disorders. And there are many types of lysosomal conditions – click here for a list. The investigators screened the DNA collected from 1156 individuals with Parkinson’s and 1679 unaffected “control” participants.

The researchers found that over half (56%) of the Parkinson’s cases they analysed had at least one genetic risk factor for another lysosomal condition (and 21% had more than one). And this result was consistent across two other independent cohorts (cohort 1. containing 436 PD cases and 169 controls, and cohort 2. containing an additional 6713 PD cases and 5964 controls).

The researchers concluded that multiple genetic hits may act in combination to reduce overall lysosomal function, which in turn could enhance Parkinson’s susceptibility (perhaps by reducing the clearance of waste proteins in cells).

If lysosomes are just small bags of enzymes, why are so many genetic risk factors associated with them?

My description of them as “small bags of enzymes” is rather a gross simplification.

There are many facets to lysosomes that need to be carefully regulated by cells. For example, the right level of acidity is required inside lysosomes in order for them to do their job, and this is controlled by numerous factors.

One of those factors is a protein called TMEM175.

Several years ago, a group of researchers published this study:

In this study, the investigators discovered a major potassium-selective channel, which is made up of a protein called TMEM175, which at the time was a protein of unknown function.

What is a potassium-selective channel?

Potassium channels are tetrameric (meaning 4 components are involved) membrane-spanning (meaning that they interact with both the inside and outside world of the cell) proteins that provide a selective conduit for the flow of potassium across cell membranes. And potassium is one of those essential elements for life – regulating heartbeats, proper functioning of muscles and nerves, and it is vital for synthesizing protein and metabolizing carbohydrates. 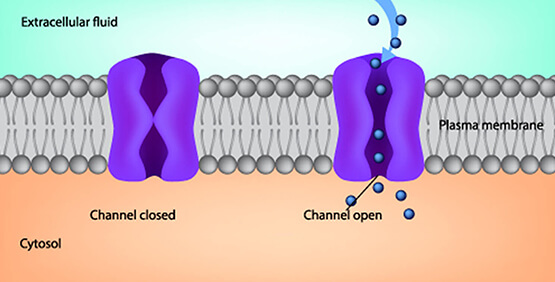 So TMEM175 is one of the components making a potassium channel?

Exactly. And in this study, the investigators found that it was located in the membrane of lysosomes:

By disrupting and manipulating TMEM175, the researchers discovered that this protein plays an important role in potassium flow in lysosomes, and contributes significantly to levels of acidity inside of lysosomes. They reported that lysosomes lacking TMEM175 exhibit no potassium flow and displayed marked instability in their acidity.

This discovery was particularly interesting for the Parkinson’s research community because the year before this study was published, another report indicated that genetic variations in and around the TMEM175 gene (the section of DNA that provides the instructions for making TMEM175 protein) are a risk factor for developing Parkinson’s.

This is the report in question:

In this report, it was discovered that there was a highly significant genetic risk factor for Parkinson’s on chromosome 4. The region in question covers several genes (including TMEM175 – see blue arrow in image below).

And this finding was supported by a second large genetics study published a few years later (Click here to read that second study). The two genetics studies found that the region of DNA where TMEM175 sits contains the third most significant association with Parkinson’s.

Interesting. What do we know about the biological function of TMEM175 and how it relates to Parkinson’s?

In 2017, an independent group of researchers published one of the first report really exploring the function of TMEM175 in the context of Parkinson’s:

In this study, the investigators reported that eliminating (or reducing) TMEM175 protein in cells disrupted lysosomal function. This effect resulted in increased neuronal vulnerability to stressors, such as the aggregated form of Parkinson’s-associated alpha synuclein protein (Click here to read a previous SoPD post about this).

Their findings suggested not only that loss of TMEM175 screwed up the ability of cells to dispose of waste, but that this also made the cells more sensitive to stress.

These same researchers published a second report in 2019 that expanded on these results:

In this study, the researchers dug deeper into the genetics TMEM175 and identified one genetic variant (called p.M393T) in the TMEM175 gene, which was 20 orders of magnitude more significantly associated with Parkinson’s than any other variant in the area.

Cells that produced the TMEM175 protein carrying the p.M393T variant were found to have reduced regulation of lysosomal acidity and reduced lysosomal activity. And these findings were supported by another publication from a separate group of researchers:

In this study the researchers identified two genetic variations in the TMEM175 gene that were associated with Parkinson’s: the p.M393T variation mentioned above, but also p.Q65P. Interestingly, p.M393T was also found to be associated with REM sleep behaviour disorder – a prodromal condition for PD.

When the investigators explored the function of the M393T variation, they found that it was associated with reduced GCase activity (the lysosomal enzyme that is affected in GBA-associated Parkinson’s – click here to read a previous SoPD post about this).

All of this research suggested that TMEM175 may be an important player in the biology underlying some cases of Parkinson’s. And very recently published research provides further support to this idea.

This report was published this month:

In this study, the researchers found that at normal lysosomal acidity (pH 4.5–5.0), TMEM175 was significantly more permeable to protons than to potassium. Optimal acidity is maintained by a very dynamic equilibrium between proton inflow and outflow across the lysosomal membrane. Reducing TMEM175 in cells resulted in lysosomal hyper-acidification and dysfunction (basically the waste disposal system stopped breaking down waste). In mice with no TMEM175, the investigators observed the aggregation of α-synuclein in the brain, as well as lysosomal over-acidification and impaired lysosomal activity in neurons.

The researchers also discovered that TMEM175 was activated by an endogenous polyunsaturated fatty acid (arachidonic acid) and two other synthetic chemicals, and by treating cells with these molecules, there was an increase in steady-state acidity which improved lysosomal function. These new discoveries led the investigators to propose that TMEM175 could be an interesting target for therapeutic intervention in Parkinson’s.

Are any biotech companies exploring TMEM175 for Parkinson’s?

Despite the research on TMEM175 only being 4-5 years old, there is already a biotech company called Caraway Therapeutics going after this area therapeutically.

In late 2020, Caraway Therapeutics announced that they had received a research grant from the Michael J Fox Foundation to further develop their TMEM175-activators (Source), so Parkinson’s is an area of interest for the company.

And in the middle of the COVID pandemic, in July 2021, Caraway announced that it had initiated an exclusive collaboration with the pharmaceutical company AbbVie to develop and commercialise the small molecule therapeutics that Caraway has been developing around TMEM175 (Click here to read more about this).

It is also interesting to note that most of the researchers listed as authors on the Jinn et al (2017) and Jinn et al (2019) studies mentioned above are employees of the pharmaceutical company Merck.

A large company like Merck would certainly have the resources and expertise to conduct the large screening experiments required to identify potential TMEM175-activators for Parkinson’s.

And given that Parkinson’s may not be the only condition that TMEM175-activators could be useful for, one would think that Merck would certainly be interested.

TMEM175 appears to be involved with other conditions as well as Parkinson’s.

For example, last year an interesting report was published highlighting TMEM175 in the context of Lewy body dementia.

Here is the report here:

Title: Genome sequencing analysis identifies new loci associated with Lewy body dementia and provides insights into its genetic architecture.
Authors: Chia R, Sabir MS, Bandres-Ciga S, Saez-Atienzar S,… (there is a VERY long list of authors in this study – to save space, I’m cutting a few out)…., Chiò A, Ross OA, Gibbs JR, Dalgard CL, Traynor BJ, Scholz SW.
Journal: Nature Genetics 2021 Feb 15. Online ahead of print.
PMID: 33589841              (A preprint manuscript of this report was made OPEN ACCESS if you would like to read it)

In this study, the researchers were interested in determining the genetic risk factors of Lewy body dementia, with the goal of better understanding the underlying biology of the condition.

The investigators highlight TMEM175 in the discussion of their report, noting that the “identification of TMEM175 underscores the role of lysosomal dysfunction in the pathogenesis of Lewy body diseases“.

Many of the reports highlighted in today’s post have pointed towards TMEM175 as a “targetable mechanism”. Hopefully we’ll see more research on this protein in the near future.

Since the genetic sequencing revolution of the 1990s/2000s, we have become aware of at least 80 genetic regions associated with an increased risk of developing Parkinson’s. Most of these have only been discovered in the last 10 years and scientists have been madly trying to decipher the biological pathways related to these risk factors to gain potential insights into what could be happening in Parkinson’s.

Here at the SoPD HQ, we have been concerned for some time that too much focus in Parkinson’s research is centered on the “usual suspects” (alpha synuclein, LRRK2, GBA1, etc). Thus, we are always interested to learn about novel therapeutics being developed around new aspects of Parkinson’s-associated biology.

There is so much research going on with targeting alpha synuclein, LRRK2 and GBA1 that one could easily be left wondering if there were no other options. It is exciting to see a better understanding of the biology associated with other Parkinson’s-related proteins.

The banner for today’s post was sourced from labiotech

2 thoughts on “The modification of acidification”