INTERESTING RESEARCH FINDING 2: This difference is specific to chocolate. There is no difference in the consumption of other forms of sugary treats between the two populations.

Today’s post deals with a topic very dear to me and it’s relationship with Parkinson’s disease. 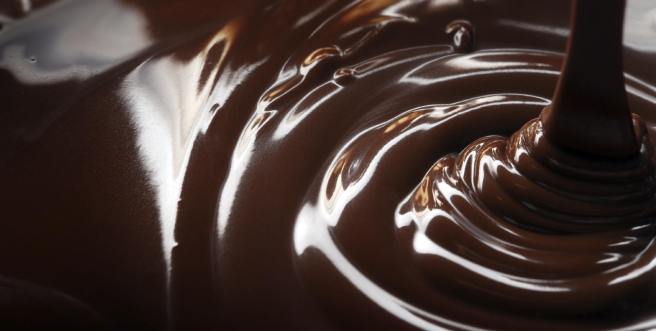 Everyone likes chocolate, especially at this time of the year. Curious thing is though, people with Parkinson’s seem to like chocolate even more than non-Parkinsonian people.

Why is that? We’re not sure. But some interesting research has been conducted on chocolate and Parkinson’s disease, which we shall review in this post.

The word “chocolate” comes from the word xocolātl. This word is from the Aztec language (Nahuatl), and is a combination of the words xococ (meaning ‘sour or bitter’), and ātl (‘water or drink’). This is because for the vast majority of it’s existence, chocolate has been consumed as a drink. 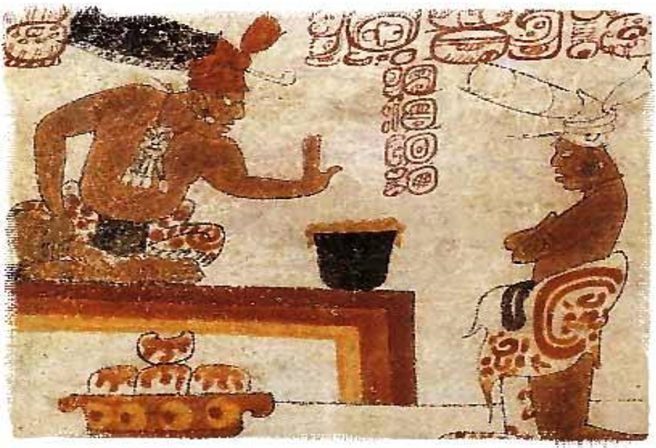 Fermented beverages made from chocolate date back to 1900 BC in Mesoamerica. The Aztecs believed that cacao seeds were a divine gift from the god of wisdom, ‘Quetzalcoatl’. In fact, the seeds were so precious to the Aztecs that they once had so much value that they were used as a form of currency.

Chocolate was introduced to Europe in the 16th century by the Spanish who added sugar or honey to counteract the natural bitterness. Since then, it has had a rather successful rise in popularity.

How is chocolate actually made?

Chocolate comes from the beans of the Theobroma cacao tree – an evergreen native to the tropical regions of Central and South America. The beans are produced in pods, like these: 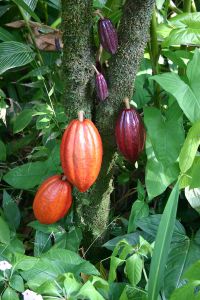 Pods of the of Theobroma cacao tree. Source: Wikipedia 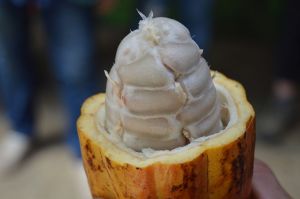 Seeds inside the pod. Source: Wikipedia

Cacao beans are harvested from the pods, and then allowed to ferment over a period two weeks. Two things happen during this process: 1. outside of the pod, the beans are exposed to the warm heat which kills the germinating seed, and 2. natural yeasts – which like the heat – grow and help to develop complex flavours.

After this fermentation period, the beans are then sun-dried, which helps to preserve them for shipping. Next, the beans are roasted, which helps to further develop complex flavours and to remove unpleasant acidic compounds developed in the fermentation process. This is followed by mechanically separating the valuable nibs (interior of the bean) from the useless shells.

The nibs must then be refined, which involves extensive grinding. The raw cocoa liquor is then “conched“. This is the stage where the general characteristic tastes, smells and textures of chocolate are developed. Conching is a lengthy process which drives off the rest of the acidic flavoring compounds. The process also helps coat the ground up cocoa particles with fat to reduce the viscosity of the molten chocolate. 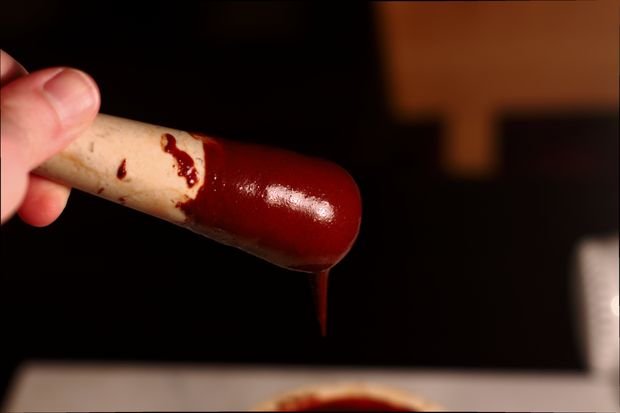 Finally, the conched product is tempered which gives chocolate it’s gloss and affects how it melts in your hands/mouth. Tempering is necessary because cocoa butter can crystallise into at least six different forms (form V being the most desired). Each of these forms have different stability and properties. Form V has the most popular texture and ‘feeling in the mouth’, in addition it does not melt too quickly in the hand.

Why is chocolate soooo good?

No one is entirely sure. Chocolate contains many different chemicals which help in making chocolate tasty and (dare we say it) addictive. Among the most important ingredients are stimulants like phenylethylamine and caffeine (all in very small quantities), which can give you a positive boost.

Importantly, chocolate also contains a feel-good chemical called anandamine, which functions in the brain by binding to cannabinoid receptors (these are the same receptors that chemicals in marijuana bind to). Its name actually comes from ananda, the Sanskrit word for “bliss”. Normally anandamide is broken down quite quickly after it is produced, but some researchers believe that the anandamide in chocolate makes the natural anandamide in our brain persist for longer, giving us a longer-lasting “chocolate high”.

And what is the difference between dark and white chocolate?

Ok, now don’t be upset, but technically speaking white chocolate is not really a chocolate.

It is made without any cocoa powder or solids, containing just cocoa butter mixed with milk and sugar. Without the cocoa powder, chocolate has no colour thus it’s white. In addition, white chocolate doesn’t have many of the ‘happy’ ingredients likes caffeine.

Not actually being a chocolate makes white chocolate very useful, however, in research (as you shall see below). Given that it is missing many of the key components of normal chocolate (eg. cocoa, caffeine, etc), white chocolate can be used as a control substance in studies looking at the effect of chocolate on various conditions.

Are there health benefits of eating chocolate?

Mum always told me that chocolate was bad for me, but recent scientific research has altered this perception. Studies of the Kuna Indians of the San Blas islands of Panama, who consume large amounts of a natural cocoa beverage, have found lower blood pressures, better renal function and decreased cardiovascular mortality relative to mainland Panamanian control populations (Click here to read more on this).

The prevalence of hypertension in Kuna indians who have migrated to urban areas on mainland Panama is significantly higher (10.7% of the population compared with just 2.2% of those still on the islands). This is believed to be partly due to the reduction in cacao intake – Kuna indians on the islands eat 10 times more than their mainland equivalents.

Interesting. But what does all of this have to do with Parkinson’s disease?

Right. Down to business. In 2009, this research report was published:

Using measures of mood (such as the Beck’s Depression Inventory survey), the researchers found that this increased consumption of chocolate was independent of feelings of depression. This interesting observations lead the researchers to conduct this clinical study:

The researchers in this study (the same people who published the survey study above) tested the effects of 200g of (80% cacao) chocolate on Parkinsonian motor scores (as measured by UPDRS). They assessed 26 people with moderate non-fluctuating Parkinson’s disease at both 1 and 3 hours after eating the chocolate. The researchers used white chocolate as the control treatment in the study, and they (the assessors) were blind to which treatment each subject received.

At 1 hour after consumption, the researchers noted a mild decrease in both treatment groups (most statistically in the dark chocolate group) when compared to the measures taken at baseline (that is before the actual study started). Similar results were observed in the measures taken at 3 hours post consumption. The researchers also took blood samples and found no differences in β-phenylethylamine blood levels (we’ll come back to this shortly).

Altogether, while there was an improvement in motor performance after eating chocolate, the results indicated no difference between dark chocolate and white cacao-free chocolate on Parkinson’s motor function.

β-phenylethylamine is a naturally occurring chemical in the body, which is produced in chocolate during the thermal processing of cocoa (click here for more on this). Functionally, β-phenethylamine is similar to amphetamine in its action, as it leads to the release of dopamine. Interestingly, people with Parkinson’s disease have almost 50% less β-phenethylamine in the fluid surrounding their brains (Click here to read more on this). Thus, in addition to any stimulant effect of caffeine, increasing β-phenethylamine levels by eating chocolate may be causing an increase in dopamine levels in the brains of people with Parkinson’s disease – resulting in better motor scores.

But the researchers in the clinical study of chocolate reviewed above did not register any change in blood levels of β-phenethylamine. Again, perhaps longer term usage is required in order to detect a significant rise.

Here at the SoPD, we feel that the effect of chocolate on Parkinson’s disease have not been fully explored. More research is required. And we are not just saying this because everyone likes chocolate.

Firstly, it would be interesting to replicate what has already been done, particularly the survey of chocolate consumption to determine if people with Parkinson’s disease really do eat more chocolate! This is the most interesting observation reported thus far and needs to be replicated. It would be interesting to determine if the difference pre-dates diagnosis – that is to say, do people who develop Parkinson’s disease eat more chocolate when they are younger (before they are diagnosed)? Could chocolate be actually having a negative effect on the development of the disease?

Second, if a longer term analysis of chocolate and Parkinson’s disease indicates an effect, it would be interesting to further investigate individual ingredients. If we are investigating the ingredients of coffee to assess beneficial components for Parkinson’s disease (click here for more on this), the same analysis of chocolate should be conducted.

The banner for today’s post was sourced from pngimg.