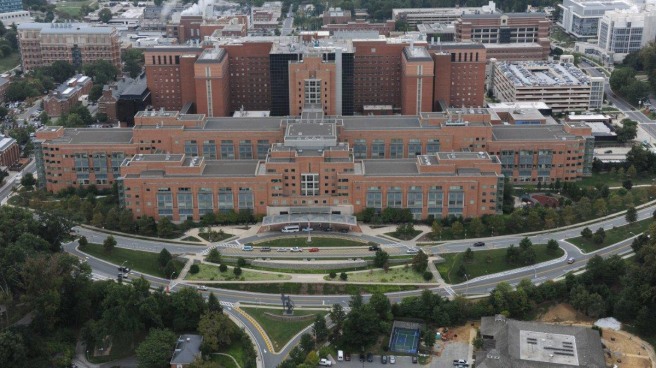 In the late 1870s, the US ongress allocated funding for the investigation of the causes of specific epidemics (such as cholera and yellow fever). An urgent need was recognised and the US congress acted.

In doing so, however, it not only created the National Board of Health, but it also made medical research an official government initiative.

The National Board of Health was re-designated several times and in 1930 the US National Institutes of Health (or NIH) was born.

The NIH has gone on to become one of the largest funders of medical research in the world. And some of the numbers are really staggering (Source):

It is an institution that can seriously change the landscape for medical research. And recently it has been trying to do this via AMP programmes.

What are AMP programmes?

The Accelerating Medicines Partnership (or AMP) programmes are public-private partnership between the NIH, the U.S. Food and Drug Administration (or FDA), multiple biopharmaceutical/life science companies, and non-profit organizations. The goal of these efforts are “to transform the current model for developing new diagnostics and treatments by jointly identifying and validating promising biological targets for therapeutics”.

And the ultimate goal of the AMP programmes is to “increase the number of new diagnostics and therapies for patients and reduce the time and cost of developing them“.

That’s great. But what does this have to do with Parkinson’s?

In January 2018, an AMP programme focused on Parkinson’s was launched, called the Accelerating Medicines Partnership for Parkinson’s disease (or AMP-PD).

The AMP-PD research plan encompasses a deep molecular characterisation of longitudinal clinical data from well characterised cohorts, and analysis of existing biosamples with the goal of identifying (and validating) diagnostic, prognostic and disease progression biomarkers for Parkinson’s.

How are they going to do this?

The critical component of the AMP-PD partnership is the extensive sharing of the collected data and analyses with the biomedical community, with the very simple goal of advancing research in PD.

And where has the data been collected from?

The clinical cohort data collected so far has come from:

But the goal is to include data collected from clinical trials as well (Source). Initial additional data will come from two Phase III clinical trials which have conducted long-term (multi year) assessments of Parkinson’s progress:

The data collection for both of these studies has been completed, and the results are currently being analysed. The SURE-PD study was stopped early as no effect was seen by the trial’s independent Data and Safety Monitoring Board (Click here to read more about this), and the STEADY-PD trial found no significant difference between the treatment and placebo groups after 36 months treatment (Click here to read more about this).

Interesting. So what is the big announcement today all about?

The AMP-PD team announced the launch of their data portal for accessing de-identified information collected from 4,298 people with Parkinson’s (and healthy controls – click here to read the press release).

You can find the data portal by clicking here.

The data use agreement, which allows researchers to access the data portal and interact with the entire data set can be found by clicking here.

The data portal is based on a Terra cloud-native platform. Terra was developed by the Broad Institute of MIT & Harvard in collaboration with Verily. It will allow researchers to access data, run analysis tools, and (importantly) collaborate. The platform also provides researchers with mechanisms to “build, use and share packaged analytical methods and query tools”. And the current collected dataset appears to be extremely rich (based on the information provided by the website – click here to read more about this).

Very exciting. Potentially a game changer. It will be very interesting to see how this endeavour develops, grows and evolves.

I’m not sure who said it (someone please help me), but I read a quote some time ago which went something like “the best ideas come from what others do with your data“, and I loved this concept. Humbling and utilitarian, it embodies the idea that more can be gained by sharing.

The AMP-PD is a wonderful idea. Pulling together as much data as we can and providing researchers with access to it is exactly what we need. Opening up vast datasets will hopefully bring about new discoveries, new ideas, new testable hypotheses and all of this will lead to new knowledge, new biomarkers, and (fingers crossed) new therapies for Parkinson’s.

It is an ambitious project in it’s scale and goal, but also in its attempt to change attitudes. Open data, open science, open access are all very popular concepts and they get a lot of lip service at the moment, but the biggest challenge with all of them is having an open mindset.

One thought on “AMP-PD is here”