This week an interesting new study dealing with the biology of Alzheimer’s was published in the journal Science Translational Medicine. It has drawn a lot of attention as it may be turning our understanding of Alzheimer’s disease on it’s head. If the results are independently replicated and verified, it could potentially have major implications for Parkinson’s disease.

For the last 30 years, a protein called beta-amyloid has been considered one of the bad boys of the most common neurodegenerative condition, Alzheimer’s disease.

What is Alzheimer’s disease?

Alzheimer’s disease is a progressive neurodegenerative condition that can occur in middle or old age. It involves a generalized degeneration of the brain, not localised to specific regions like Parkinson’s disease.

What happens in the Alzheimer’s brain?

In the brain, in addition to cellular loss, Alzheimer’s is characterised by the presence of two features:

The tangles are aggregations of a protein called ‘Tau’ (we’ll comeback to Tau in a future post). These tangles reside within neurons initially, but as the disease progresses the tangles can be found in the space between cells – believed to be the last remains of a dying cell.

A normal brain vs an Alzheimer’s affected brain. Source: MMCNeuro

Amyloid plaques are clusters of proteins that sit between cells. A key component of the plaque is beta amyloid. Beta-amyloid is a piece of a larger protein that sits in the outer wall of nerve cells where it has certain functions. In certain circumstances, specific enzymes can cut it off and it floats away.

Beta-amyloid is a very “sticky” protein and for a long time it has been believed that free floating beta-amyloid proteins begin sticking together, gradually building up into the large amyloid plaques. And these large plaques were considered to be involved in the neurodegenerative process of Alzheimer’s disease.

So what was discovered this week?

This week a study was published that suggests a new (and positive) function for beta amyloid:

They infected all of the mice with the microbe that causes meningitis, and they found that the mice producing a lot of beta amyloid lived significantly longer than other groups of mice. They then repeated the experiment in a species of microscopic worm – called C.elegans – and found similar results. These findings suggested that beta amyloid was having a positive effect in the brain.

But then they noticed something strange.

The results of these experiments suggested to the researchers an intriguing possibility that beta amyloid may be playing a protective in the brain – acting as an immune system for the brain – against infection.

Thus the aggregations we see in the brains of people with Alzheimer’s may not be the cause of the cell death associated with the disease, but rather evidence of the ‘brain’s immune system’ trying to fight back against unknown infectious agents. The researcher’s of the study were quick to point out that this antimicrobial action of beta amyloid is simply a new function of the protein, and it may have nothing to do with the disease itself. But it will be interesting to see where this research goes next.

What has this got to do with Parkinson’s disease?

Parkinson’s disease is only definitive diagnosed at the postmortem stage. This is done by microscopic examination of the brain. In the brains of people with Parkinson’s disease, there are protein aggregates calls Lewy bodies. These are densely packed clusters of a protein called ‘alpha synuclein‘. 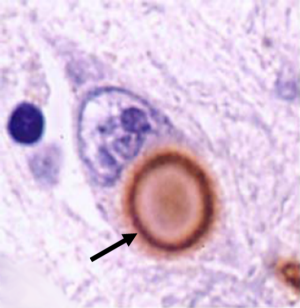 The brown spot is a Lewy body inside of a brain cell. Source: Cure Dementia

If the results of the study presented above are correct and beta amyloid is a protective protein in the brain against infection, could it not be that alpha synuclein may be playing a similar role? It is a fascinating idea that it will be interesting to test.

What are the implications of the study?

Today’s banner was sourced from PBS.

5 thoughts on “A change of dogma for Alzheimer’s disease?”