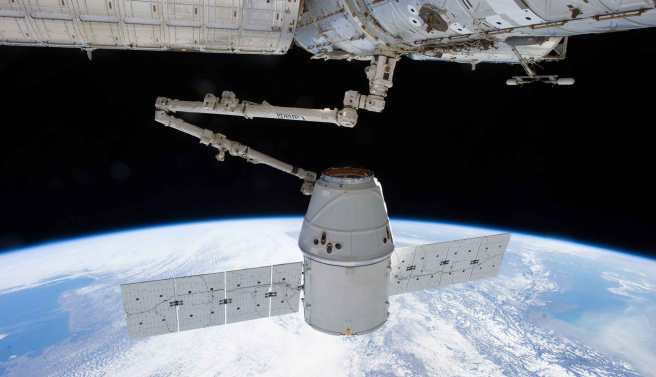 When you look up at the sky tonight – if you look for long enough – you may well see a bright little object hurtling across the sky (Click here to learn more about how to track the International Space Station). Know that inside that bright little object passing over you there is currently some Parkinson’s disease-related research being conducted.

What is the International Space Station?

The International Space Station (or the ISS) is the largest human-made object that we have ever put into space. It is so big in fact that you can see it with the naked eye from Earth.

(How’s that for exciting viewing?)

The size of the the ISS compared to a Boeing Jumbo jet. Source: Reddit

First approved by President Ronald Reagan in 1984, it was not until November 1998 that the first components of the International space station were first launched into orbit. 36 shuttle flights were made to help build the station. The first crew members took up residence on the 2nd November 2000, and the station was completed in 2011. There is always 6 crew members on board – the current team are Expedition 52 – and it has been visited by 220 astronauts, cosmonauts and space tourists from 17 different nations since the project began.

What is the point of the space station?

The station has three primary goals:

It was also planned to provide a staging base for future missions to the Moon, Mars and asteroids (although this goal took a back seat in 2010, when President Obama cancelled the Orion spacecraft and Ares rocket programme).

And how much does all of this cost?

The ISS is the most expensive thing humans have ever built. The station has cost approx. $160 billion to build and maintain thus far (with 2/3 of the money coming from the US tax payer), and the running cost of the stations is $7.5 million per person per day (the most expensive housing ever!). The US National Aeronautics and Space Administration (NASA) to seeking to keep the station going until 2024 (Click here to read more about this).

And they are making a special effort to demonstrate how the ISS is benefiting mankind (see their 15 ways ISS benefits Earth page), and they keep a database of results of all the research being conducted on the station.

Importantly, the research being conducted on the ISS is focusing on how micro-gravity affects the human body. And this will pay big dividends for ‘the unborn’. As we look towards a future where we have more of a presence in space and exploring the solar system around us, what we learn now about how the human body deals with micro-gravity will be invaluable.

Sunrise on the ISS. Source: Wikipedia

Not sure I agree with you on that

Well think of it this way: there is a project currently being conducted on the ISS that could not be done on Earth that could pay big dividends for the Parkinson’s community.

Ok, so what is the Parkinson’s research being conducted on the ISS?

Last Monday, the SpaceX Dragon CRS-12 rocket carried up to the ISS the elements necessary for an experiment (called ‘Crystallization of LRRK2 Under Microgravity Conditions‘ or CASIS PCG 7)) that will involve growing crystals of a Parkinson’s associated protein called Leucine-rich repeat kinase 2 (or LRRK2). The project is being funded by the Michael J Fox foundation.

Also known as ‘Dardarin‘ (from the Basque word “dardara” which means “trembling”), LRRK2 is an enzyme that has many functions within a cell – from supporting efforts to move things around inside the cell to helping to keep the power on (involved with mitochondrial function).

The many jobs of LRRK2. Source: Researchgate

The gene that provides the instruction for making the LRRK2 enzyme resides on the 12th chromosome, in an area of DNA referred to as ‘PARK8’ (one of the Parkinson’s disease-associated genetic regions). The gene is made up of many different regions, each of which is involved with the different functions of the eventual protein.

The regions and associated functions of the LRRK2 gene. Source: Intechopen

Genetic mutations within the LRRK2 gene are recognised as being some of the most common with regards to increasing ones risk of developing Parkinson’s disease.

As the image above suggests, mutations in the PARK8 gene are also associated with Crohn’s disease (Click here and here for more on this) – though that mutation is in a different location to those associated with Parkinson’s disease. And one particularly common Parkinson’s-associated LRRK2 mutation – called G2019S – is also associated with increased risk of certain types of cancer, especially for hormone-related cancer and breast cancer in women – Click here to read more about this. If you have a G2019S mutation, it is good to be aware of this association and have regular check ups.

The G2019S mutation (the name designates its location on the gene) is the most common LRRK2 mutation. In some populations of people it can be found in 40% of people with Parkinson’s disease (Click here to read more about this). But what is interesting about this mutation is that it gives rise to a LRRK2 enzyme that is hyperactive.

The structure of LRRK2. Source: Wikipedia

As a protein, LRRK2 interacts with many different types of other proteins, and you can imagine that in a finely balanced environment like the cells that a mutant hyperactive form of LRRK2 is going to cause problems.

There are currently many efforts being made to develop inhibitors of LRRK2 in order to reduce the hyperactive activity of the mutant LRRK2 protein (Click here to read a previous post on this topic). LRRK2 inhibitors are hoped to be a future treatment option for Parkinson’s disease, slowing down the progression of the condition.

In order to design these inhibitors, however, researchers need to know exactly what LRRK2 looks like.

How do they do that?

In order to see the structure of specific proteins, researchers use a technique called X-ray crystallography. This basically involves putting crystals into an X-ray machine. By measuring the angles and intensities of these diffracted X-ray beams, investigators can gradually put together a three-dimensional picture of what a protein looks like. And that is why the experiment on ISS is growing crystals of LRRK2 protein.

How do you grow crystals of proteins?

When the molecules of a protein (the crystal-to-be; also called the solute) bump into each other in a liquid (called solvent) they generally like to stick together. The more solute present in the solvent, the faster your crystal will develop. The process of building crystals is called nucleation.

Maybe you remember making crystals in science class at school:

The experiment being conducted on the ISS is slightly more complicated that simply putting sugar and string into a jar of water. The experiment will be conducted on a Microlytic Crystal Former Optimization Chip (16 Channel) plate from Anatrace ltd. It is a small plate (about the size of your credit card) that looks like this:

How the experiment will be conducted. Source: Microlytic

Gradually the crystals will form over time before the plate is returned to Earth for X-ray crystallography analysis.

Examples of crystals that grow in the channel. Source: Anatrace

But why do we need to grow LRRK2 protein crystals in space?

The quality of the LRRK2 crystals grown down here on planet Earth up until today have been small and of poor quality. Growing crystal in microgravity was one of the earliest experiments conducted aboard the International Space Station. The unique microgravity environment of space offers an ideal setting for growing crystals that are more perfect than their terrestrial-grown counterparts. Parkinson’s researchers are hoping that the microgravity of the ISS will allow larger LRRK2 protein crystals to grow which will be easier to conduct X-ray crystallography experiments on.

One of the great misconceptions about space is the idea of weightlessness.

The affect of gravity on an object is still very apparent. Believe it or not, the Earth’s gravity is only slightly weaker at the altitude of the ISS than it is at the surface of the Earth.

Any object in orbit is in a continuous state of free fall. This effect gives the appearance of a state of weightlessness, but if the altitude of the ISS was not being continuously adjusted, the entire structure would simply fall back down to Earth (the ISS is currently falling back to earth at a rate of 2 km/month).

You can simulate this with an aeroplane. By increasing altitude very rapidly (45 degree climb for 20 seconds), as you come out of that climb and gradually level off, all of the people (and objects) on board that plane will experience ‘microgravity’.

For about 15 to 20 seconds, everything not tied down on board the plane will be free of gravity. Gravity is still present, but not apparent to the observers inside the plane.

The microgravity LRRK2 experiment can not be done on an aeroplane going through this manoeuvre because growing good crystals requires day or weeks. Hence the need for the microgravity of the ISS.

So what happens next?

For the crystals to grow, be returned to Earth, and then be analysed.

While we wait, you can watch the entire lift off of the SpaceX Dragon CRS-12 rocket from Monday. It is 13 minutes long, and if you can’t be bothered watching it all, I recommend that you watch the first minute at least for the lift off, and then skipping to 8 minutes in when the first stage of the rocket returns to and lands at the launch site (it still blows my mind that they can do that!):

You can also watch the arrival and capture of the Dragon capsule at the ISS two days later (Wednesday):

And if that is not enough for you, you can also watch the pre-launch press conference (all 56 minutes of it – it is nice to see that these launches are once again becoming major media events… most of the content is technical (read ‘boring if you are not into the engineering of rockets’), but I’m glad to see some interest in space exploration again!):

You may have guessed by reading between the lines that I’m like a little boy again with this story. There is something very exciting about the idea of ‘space exploration’ and I can’t help but marvel at what we are capable of achieving in that hostile environment. But this should not take anything away from the Parkinson’s related research being conducted on the ISS, which is a critical project. One should not assume that this is a stunt or trivial bit of science, this implications of this experiment are big for Parkinson’s disease.

It should be noted that we are not yet clear as to whether LRRK2 inhibitors will be useful for the entire Parkinson’s affected community or just the 3% of people with Parkinson’s that have a mutation in this gene. Once better LRRK2 inhibitors have been designed based on the results of this orbiting experiment, we can eventually plan to test some this idea.

Until then, go outside tonight and try to find the ISS while enjoying the heavenly view (Sod! Weather report indicates cloudy conditions here in Cambridge!).

The banner for today’s post was sourced from Teslarati

8 thoughts on “Lrrking in low orbit”