The name “oligodendrocyte” comes from the Greek.

The name was given to cells in the brain with small branches by the Spanish neuroscientist Dr Pío del Río Hortega (1882–1945):

Del Río Hortega developed a staining method that allowed him to differentiate what the great Ramón y Cajal referred to as the “third element” of cells in the brain. Initially calling them “interfascicular cells”, Del Río Hortega later changed the name to oligodendroglia.

Cool. But what do oligodendrocytes do?

Oligodendrocytes are a type of glial cell (or ‘non-neuronal cells’) in the brain. Their main function is to provide insulation to the main projection of neurons (these branches are called axons). The insulation provided by oligodendrocytes is called the myelin sheath. 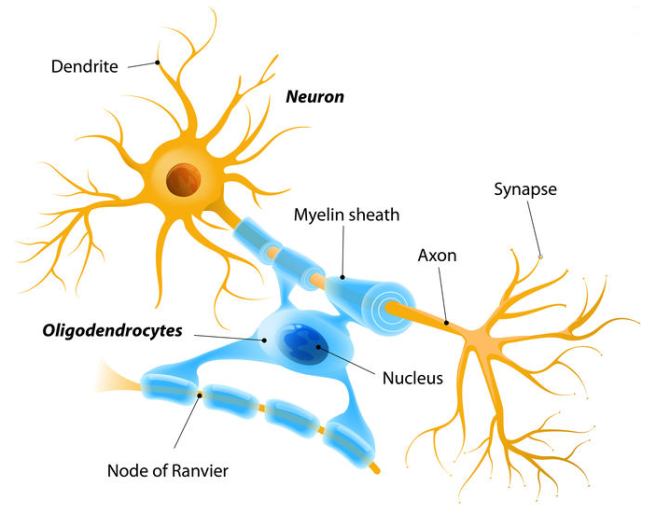 Oligodendrocytes extend many processes, each of which contacts and repeatedly envelopes a stretch of axon with layers of myelin. On the same axon, adjacent sections of myelin will belong to different oligodendrocytes. And a single oligodendrocyte can have 40-50 processes making contact with axons.

You know how people talk about gray matter and white matter in the brain?

Well, the myelin surrounding all of the axons is what make the white matter white (Gray matter being where the main body (or soma) of neurons is).

So the oligodendrocyte is protecting the main branch of the neuron? The axon?

Not just protecting it.

Myelin plays a very important role in the transmission of signals around the brain.

You may have noticed in the image above small gaps between sections of myelin. These are called nodes of Ranvier.

These gaps allow signals (or action potentials) to pass along the axon faster.

In the absence of myelin and nodes of ranvier, the signal would slow down and lose its strength very quickly (see the animation below).

The importance of myelin and nodes of ranvier is apparent in demyelinating conditions like multiple sclerosis (or MS). Underlying this disease is a cell mediated loss of the insulating mylein on axons. As that myelin is lost, a range of symptoms start to show themselves. Symptoms can include double vision, blindness in one eye, muscle weakness and trouble with sensation or coordination.

This is all very interesting, but what do oligodendrocytes have to do with Parkinson’s?

At least that was what we used to think.

The aggregation of alpha synuclein protein (the assumed villan in PD research) has been observed in oligodendrocytes in the Parkinsonian brain (click here to read a report about this), but “glial cell” accumulation of alpha synuclein is typically associated more with “multiple systems atrophy” (or MSA – a condition very similar to Parkinson’s, but distinctly different – click here to read a previous SoPD post on MSA).

It is fair to say that oligodendrocytes have not really been on the radar for many Parkinson’s researchers.

And that is why several recent reports have resulted in the scratching of many heads.

What did the research reports suggest?

So last year a report was published by researchers associated with the International Parkinson Disease Genomics Consortium (or IPDGC – click here to read a previous SoPD post about this group).

This is the report in question:

In this study, the researchers wanted to examined whether genes (or regions of DNA) associated Parkinson’s were more (or less) active in different brain cell types.

What do you mean ‘different brain cell types’?

Different types of cells in the brain. Source: Dreamstime

Neurons are the main cell involved in cognitive activity, they are the work horses of cognitive activity. Astrocytes are one of the ‘helper cells’ in the brain. They provide nutrients to neurons and make sure the environment surrounding the neurons is balanced and supportive.

Microglia are another type of the helper cells in the brain. They act as the resident immune cells. When infection or damage occurs, the microglia become ‘activated’ and start cleaning up the area. And then we also have oligodendrocytes (discussed above).

For a long time, neurons have been the focus of much neurodegenerative research. The science world has viewed neurons as the prima donnas and the rest of the cell types as a mix of back up singers.

So the researchers wanted to know if genes associated Parkinson’s were more (or less) active in one of these types of cells?

Exactly. They were asking questions like “does a Parkinson’s-associated gene like LRRK2 has higher levels of activty in neurons or astrocytes?”

And what did they find?

Curiously, they found that genetic variations associated with Parkinson’s were not enriched in global and regional brain annotations or brain-related cell-type-specific annotations. Likewise, we found no enrichment of PD susceptibility genes in brain-related cell types.

No, the researchers changed tack and looked at Parkinson’s-associated genes linked to specific functions. They found that gene associated with lysosomal function (a component of waste disposal and recycling) had higher levels of activity in astrocytes, microglia, and oligodendrocytes.

This finding suggests that lysosome function is different in the helper cells.

It raises the idea that the molecular risk factors associated with Parkinson’s may not lie entirely in those cell types that display the characteristic pathology of Parkinson’s (think neurons with Lewy bodies, etc), but rather in some of the helper cells.

Perhaps the backup singers not supporting the prima donnas like they should be?

But what about oligodendrocytes specifically?

Yes, so they (in particular) have popped up on everyone’s radar more recently due to research published this year.

Reynolds et al (the report discussed above) shifted the attention towards the glial cell types, and then in April (2020) this report published:

In this study, the researchers pooled together a huge amount of genetic data from different psychiatric disorders and neurological conditions. They then integrated those results with single-cell data from the entire nervous system – samples of each type of cell in multiple regions of the brain had their RNA sequenced and identified, allowing for a representation of which genes are active in each cell type (this is referred to as single cell sequencing).

In this fashion, the researchers could explore which genes are more (or less) active in each cell type of the brain across all of the neurological conditions (including Parkinson’s).

And to their surprise, Parkinson’s gave them one of the strangest results of their study: oligodendrocytes!

When they looked at genes that were particularly active in the substantia nigra part of the brain (the region where the dopamine neurons reside, and an area of the brain badly affected by Parkinson’s), one of the biggest differences that they saw between unaffected control brains and PD brains was oligodendrocyte-related genes were very active.

And one interesting detail in this image, is that the top lines represents different stages of Parkinson’s (Braak stage 1-2, Braak stage 3-4, & Braak stage 5-6). Oligodendrocyte-related genes are elevated across all of these stages (even stage 1-2, before dopamine neurons become affected by the condition).

This result kind of left the researchers befuddled and curious.

They concluded their study by writing:

“Our findings suggest that alterations in oligodendrocytes occur at an early stage of disease, which precedes neurodegeneration in the substantia nigra, arguing for a key role of this cell type in Parkinson’s disease etiology”.

Has anyone else reported this oligodendrocyte finding?

This manuscript was made available around the same time as the journal article above was published:

In this study, the researchers conducted a similar study to those described above (single cell analysis and applying disease-related genetics to them) and found that “genetic risk in Parkinsons is indeed associated with dopamine neurons, but also with oligodendrocytes, giving new insights into the causes of Parkinson’s”.

And they added that “By contrast, we find no association between PD risk and microglia, suggesting that neuroinflammation is not a key causal process in Parkinson’s”. They also found that the activity of the Parkinson’s associated gene LRRK2 was significantly higher in oligodendrocyte precursor cells than any other cell type in the  substantia nigra.

Interesting. But do oligodendrocytes have a close relationship with dopamine neurons?

So this is one of the really puzzling parts of all of this research pointing at oligodendrocytes:

Dopamine neurons are rather sparcely insulated by myelin (Click here to read more about this).

Myelin insulation is important because it decreases the energy required by neurons for transmitting signals. The more myelin, the less energy a cell needs to use to send a signal. And as a result, poorly myelinated dopamine neurons may really be struggling and stressed over time.

Thus, dopamine neurons may be more susceptible to external stressors (like shock or pathogens) due to their increased energy demands (dopamine neurons have VERY long axons). 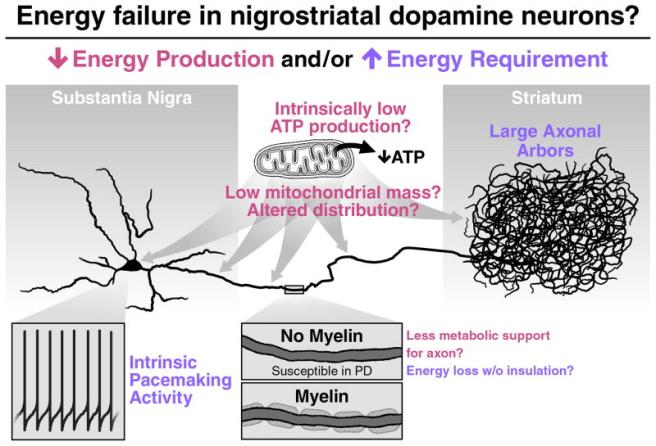 And this weakly myelinated effect has been seen in other cell types in Parkinson’s, not just dopamine neurons. For example, this report in which the investigators looked at cardiac tissue in Parkinson’s:

In this study, the researchers reported that the percentage of unmyelinated axons were significantly lower in samples of cardiac tissue from people who passed away with Parkinson’s compared to those of unaffected control samples.

And all of this could explain why oligodendrocyte-related genes become more active in Parkinson’s – perhaps there is more demand for their sparce support from the ‘prima donna’ dopamine neurons early in the condition.

Obviously, more research on oligodendrocytes in Parkinson’s is required.

It is important to appreciate that this view could have significant implications for many aspects of Parkinson’s research, from disease modelling (should we really be focusing on the cell type that demonstrates the highest levels of α-synuclein aggregates?) to drug development (should we be targeting specific types of cells therapeutically – and not necessarily dopamine neurons?). It also really get to the heart of our current understanding of what “Parkinson’s” is (“are oligodendrocytes the silent villan hiding in plain site?”).

Ten years ago everyone was focusing on dopamine neurons. Now, perhaps not so much.

The banner for today’s post was sourced from MSsoc.