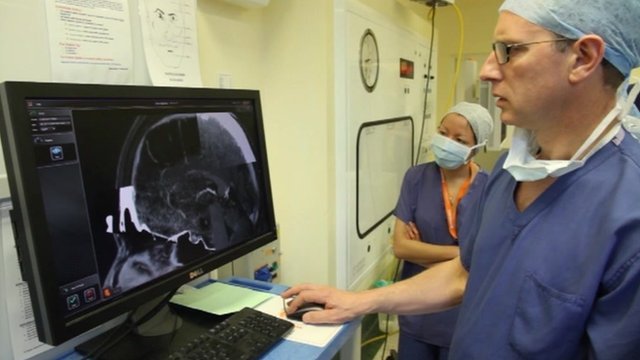 We learned today that the phase 2 GDNF clinical trial in Bristol (UK) has not met the primary end point of efficacy (demonstrating a positive effect compared to a placebo treatment). That is to say, the initial results suggest that the drug has not worked. In this post we will review what we know and discuss what will happen next.

We have previously discussed GDNF and Parkinson’s disease (Click here to read that post). This drug was considered the great hope for Parkinson’s disease and a lot was riding on the results. Today’s announcement is extremely unwelcomed news, but it is not necessarily the end of the road for GDNF.

Given the amazing results in laboratories around the world, clinical trials were set up for people with Parkinson’s disease. The first study had astounding results, but a larger follow up study did not replicate those results and so a third GDNF clinical trial was initiated: the Bristol GDNF study

What is the Bristol GDNF study?

The study involved participants having GDNF (or a placebo drug) pumped directly into their brains, into an area called the putamen. The putamen is where the greatest loss of dopamine occurs in people with Parkinson’s disease.

All together there were 41 people with Parkinson’s disease enrolled in the clinical trial. The trial was divided into two phases and the first of those is now complete. During the first phase 35 participants received either GDNF or a placebo drug over 9-months in a double blind fashion

What does double blind mean?

It means that neither the researchers nor the participants know which drug they are receiving. Everyone is ‘blind’ to the treatment. Single blind studies involve the researchers being aware of the treatment allocation, but the participants are blind. Single blind studies can be affected by what is called ‘investigator bias’ – where the investigators start to think that they see an effect when there may not be an effect. Double blind is considered the gold standard, but there are problems with this type of study as well.

If phase one has finished what is phase two of the trial?

The second phase of the study will involve all participants receiving GDNF. This part is already underway.

What was the “primary efficacy end point”?

The press release from the company behind the study, MedGenesis, suggested that:

With the limited information we currently have, we are assuming that the researchers were looking for a significant improvement in the motor symptoms rating scale (‘UPDRS’) of the subjects when compared to how they were at the start of the trial (‘baseline’). The subject’s motor features were assessed during periods when they were not taking their medication (‘OFF-state’), and the initial indications are that the researchers have not seen any improvement in the GDNF treated group compared to the placebo control treated group.

Is this negative result the end of the world?

NO. Most definitely not.

There are many reasons why the trial may have not achieved its primary end point, and the researchers have emphasized that they need time to analyse all of the results. It will be interesting to see the final analysis (and we will summarise it here when it is available – end of 2016 apparently).

It will also be important to follow up the participants to determine if there are any delayed positive outcomes. It may take longer than 9 months to see improvements (fetal transplant studies, for example, usually require 2-3 years before improvements are observed).

Maybe GDNF just needs a bit more time. We will keep you updated as more information comes to hand.

For more on the study, please see Parkinson’s UK and MedGenesis.