Earlier in the year I wrote a post called the 2020 wish list, where I discussed some hopes for Parkinson’s research this year. Despite everything that 2020 (annus horribilis) has thrown at us, there have been significant developments regarding Parkinson’s research and some of those wishes.

One of those hopes was the announcement of new and innovative methods for restorative techniques for Parkinson’s. At present, all of the restorative approaches in clinical trial for Parkinson’s are focused on stem cell transplantation (Click here to read a recent SoPD post describing an example of this), and it would be good to broaden the range of approaches being tested.

As a result of this particular wish, a theme here on the SoPD this year has been to write posts highlighting new restorative research as it has been published (Click here, here and here to read some examples).

In today’s post, we are going to continue that theme with an extremely radical bit of research that utterly boggled my mind. 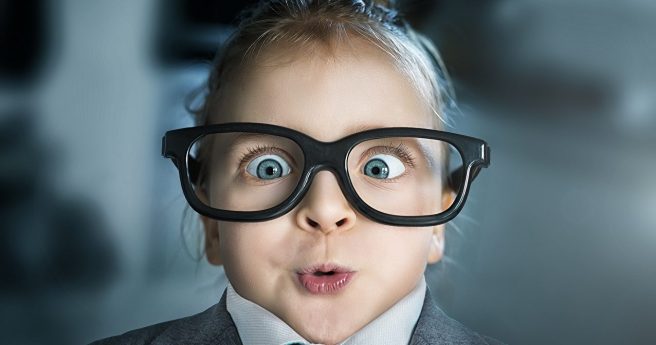 Me after reading this report. Source: 1zoom

Be warned, this is very futuristic, blue sky, “way out there on the horizon”-kind of stuff.

But when I read this report in August, I was left stunned… and rather excited by the potential possibilities.

Sounds interesting, what was the research report about?

This is the report that was published: 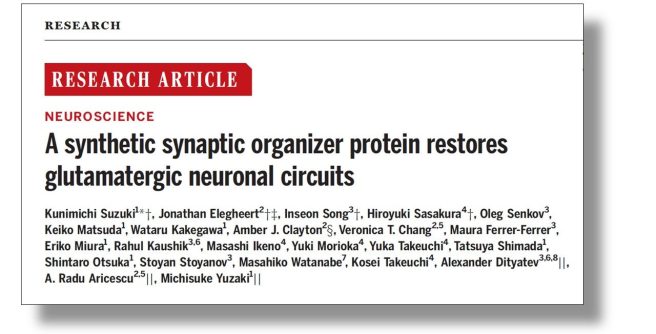 In this study, the researchers presented a novel method of ‘gluing’ the damaged back brain together.

Researchers in Japan, England and Germany collaborated to develop an artificial protein that was capable of a very clever trick. The scientists combined different structural components from a set of naturally occurring proteins that are called synaptic organizing proteins.

What are synaptic organizing proteins?

Neurons come in many different shapes and sizes, but they all have similar features that allow them to do their job. There is the main cell body (or soma), where the nucleus resides. And branching off from the cell body are projections called dendrites, which receive signals from other neurons. There is also a main projection from the cell body (called the axon), which is in charge of sending signals on to other neurons. 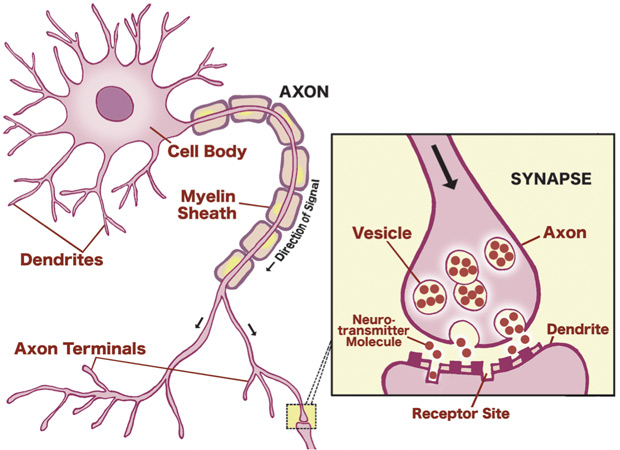 A neuron and synapse. Source: Urbanchildinstitute

Another critical feature of neurons are areas on the outer surface of the cells called synapses.

A synapse is a structure that permits one neuron to pass an electrical or chemical signal to another neuron. They are present on many areas of neurons, but particularly on the dendrites and the tips of axons (called axon terminals).

These amazing little junctions – through which nerve signals are passed between neurons – form the bedrock of our theories on how our brains work.

To learn more about synpses, watch this video:

Remarkably, synapses can be very transcient things, depending on situations and needs. The formation and reconfiguration of synapses is governed by “synaptic organizing proteins”. 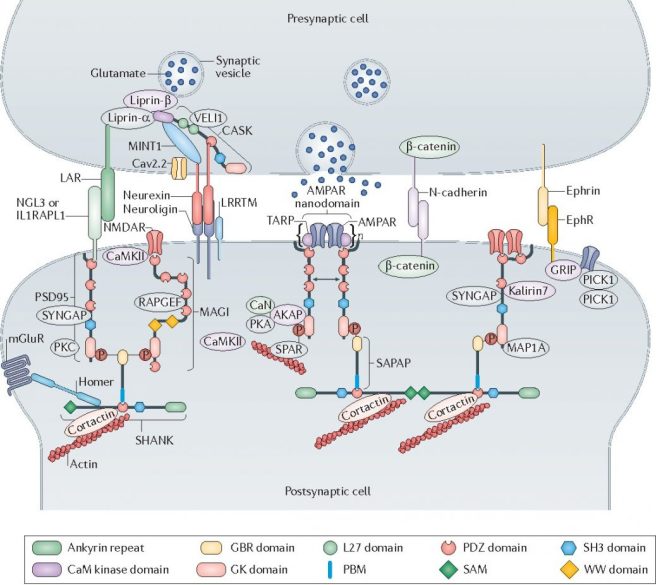 And it was this idea of strengthening the connection that the researchers were interested in exploring. Could they use different pieces of synaptic organizing proteins, bind them together and make an artificial protein that could help strengthen the synaptic connection between neurons.

The sheer number of synaptic organizing proteins provided the researchers behind today’s report with a wide range of options in building their artificial protein.

But why did they want to strengthen the connection between neurons?

The researchers pointed out that imbalance of excitatory and inhibitory signaling in synapses is thought to be an influential factor in many psychiatric and neurological disorders, including schizophrenia and neurodegeneration. Thus, they were keen to develop new tools that would allow for us to better control the number and function of synapses.

They started this process by looking at extracellular scaffolding proteins because they appear to be able to support synapses by binding pre- and postsynaptic cell surface proteins at the developing synaptic cleft.

What do you mean “pre- and postsynaptic”?

Among the synaptic organizing proteins, extracellular scaffolding proteins such as cerebellin-1 (Cbln1) and neuronal pentraxin-1 (NP1) are important as they can rapidly cause synapses to develop and strengthen, by binding pre- and postsynaptic cell surface proteins across the synaptic gap.

But here’s the thing – Cbln1 and NP1 do not directly interact.

NP1 recruits and clusters postsynaptic receptors (specifically AMPA subtype ionotropic glutamate receptors or AMPARs – don’t worry about what this means) which are important for neurotransmission. In this fashion, the postsynaptic neuron is primed to receive the signal. And Cbln1 promotes presynaptic developments by interacting with a cell adhesion molecule called neurexin (Nrx).

But Cbln1 does not bind to AMPARs.

Thus, there is limited coordination between the two. And the researchers were wondering if they could change this by somehow combining Cbln1 and NP1 into one molecule.

The synthetic synaptic organizer hybrid protein that they generated was called CPTX.

They tested their new protein in cell cultures, and found that CPTX acted as a bidirectional synapse organizer, encouraging both pre- and postsynaptic sites. CPTX appeared to be doing exactly what the investigators hoped it would across a variety of tests.

But the really amazing results came when the scientists administered CPTX to various mouse models of neurological conditions.

They started with a mouse model of cerebellar ataxia.

What is cerebellar ataxia?

Cerebellar ataxia is a non-progressive disorder that occurs when an area of the brain called the cerebellum becomes inflamed or damaged. The cerebellum is located at the back of your head, lying underneath the cerebral cortex. It is involved with the control of gait and muscle coordination.

Ataxia refers to a lack of fine control of voluntary movements, and affected individuals will experience impaired coordination, frequent stumbling, slurred speech, and uncontrolled eye movements. This video provides an example of an individual with ataxia:

So what happened when the researchers treated the ataxia mouse with CPTX?

You can see for yourself by watching the video below.

Wow indeed. The researchers used a genetically engineered mouse that has no GluD2 gene – a gene associated with ataxia. These mice develop severe motor coordination issues (Click here to read more about this). To be fair, while the effect of CPTX seen in the video is quite remarkable, it does not appear to be a complete correction (the ataxic mice do achieve levels of gait activity comparable to normal mice) based on the data presented.

But the truly remarkable part of the effect CPTX treatment is that the video above was made just 3 days after administration of the treatment. Perhaps longer term treatment will improve outcomes further.

That the speed of this effect is amazing though. Other classes of treatments that have exhibited restorative effects in models of neurological conditions (such as neurotrophic factors like GDNF) have taken weeks or even months to show any sign of effect.

You said the researchers tried other mouse models?

After the cerebellar ataxia model, they shifted their attention to a mouse model of Alzheimer’s (5xFAD mice, which produce high levels of the Alzheimer’s-associated protein beta amyloid). At 11-12 months of age, these mice were treated with CPTX or placebo, and the CPTX-treated mice were found to performed better on tests of memory. CPTX also improved the healthy of dendrites in the brain and different forms of synaptic transmission (as measured by electrophysiology).

On top of this, the researchers also treated a model of spinal cord injury with CPTX, and they observed improved movement and co-ordination for at least seven or eight weeks after just a single injection of CPTX into the site of injury.

To conclude their study, the researchers wrote “rationally designed extracellular scaffolding proteins targeting distinct pre- and postsynaptic molecules may be useful to modulate neural circuit connectivity. This approach may inspire the development of a variety of innovative molecular tools for basic neuroscience as well as the treatment of neurological disorders“.

Sounds amazing. What is going to happen next?

It is important to understand that this research is really “blue sky” stuff. We are unlikely to see this technology entering clinical trials for neurodegenerative conditions (like Alzheimer’s or Parkinson’s) in the near future. I am sharing it here simply because it is so fascinating.

In their report, the researchers point out several issues with the technology that need to be addressed before any kind of clinical application could be considered. For example, there is the untargetted nature of the treatment. Synapes in the brain are densely packed and of different types. There are also regional differences across the brain. Designing and delivering CPTX-like molecules to specific regions of the brain is going to be challenging. The dosing and affinity of CPTX-like molecules will need to be carefully optimised in future applications.

Work also needs to be done on more stable versions of CPTX. The effect in the ataxic mice apparently started to deteriorate after 3 days. It is still an impressive effect from a single injection, but the researchers will be looking for improved designs in their next generation compounds.

And how could this be useful for Parkinson’s?

Parkinson’s is associated with the gradual loss of dopamine neuron axons in the putamen and caudate nucleus of the brain (the regions where these cells release most of their dopamine neurons). 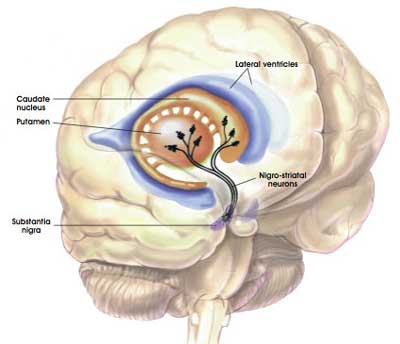 The projections of the dopamine neurons. Source: MyBrainNotes

One could envision a CPTX-like treatment being delivered to the putamen and used to encourage the synapses of those dopamine neurons to maintain/strengthen their connections. Whether that is enough to protect the dopamine neurons and keep them alive is yet to be determined, but it is one theoretical application in PD. There is also the potential for combination therapies (think a CPTX-like treatment with a neurotrophic factor such as GDNF – click here to read a previous SoPD post about GDNF).

Recently researchers have constructed a synthetic molecule that acts as bidirectional synapse organizer. It has been named CPTX, and it appears to encourage both pre- and postsynaptic activity and thereby strengthening connections between neurons. Administration of this agent in preclinical models of neurological conditions has resulted in very encouraging results.

When I read this report in August, I was left stunned. Not by the results of the research (which are amazing if they can be independently replicated), but by the fact that we humans could achieve such results.

How have we moved for the discovery of fire and finger painting on cave walls to generating complicated hybrid artificial proteins that may hold the key to repairing damaged brains? I regularly marvel at simple things like how an eye, a nose or an ear works, but increasingly many modern technological advances leave me truly speechless.

CPTX-like molecules could represent a novel class of drugs and a new age of medical therapy. But a great deal of research is now required to better optimize and better characterise this technology. And if independent replication is achieved, it will be fascinating to see all of the different directions that science will take these new molecules.

The banner for today’s post was sourced from Scifact.

2 thoughts on “CPTX: Gluing the brain back together”