With the end of the 2016, we thought it would be useful and interesting to provide an overview of where we believe things are going with Parkinson’s disease research in the new year. This post can be a primer for anyone curious about the various research activities, and food for thought for people who may have some fresh ideas and want to get involved with the dialogue.

Never before has so much been happening, and never before has there been greater potential for real change to occur. It is a very exciting time to be involved in this field, and it really does feel like we are on the cusp of some major discoveries.

In today’s post we will outline what to expect from Parkinson’s research in 2017.

Before we start: something important to understand –

The goal of most of the research being conducted on Parkinson’s disease is ultimately focused on finding a cure.

But the word ‘cure’, in essence, has two meanings:

These are two very different things.

In addition to this temporal consideration, everyone is different.

A ‘cure’ for one person may not have an impact on another person – particularly when genetics is included in the equation. Currently there is a clinical trial which is only being tested on people with Parkinson’s disease who have a particular genetic mutation (Click here to read more about this).

With all of that said, there are 4 key areas of ongoing/future research:

EDITOR’S NOTE HERE: While we appreciate that this list does not take into account important research dealing with the improving the day-to-day living and quality of life of those affected by Parkinson’s disease (such as prevention of falling, etc), we are primarily focusing here on finding a ‘cure’.

Let’s now have a look at and discuss each of these key areas of research:

Defining and understanding the biology

The first key area of research feeds into all of the others.

It is only through a more thorough understanding of the mechanisms underlying Parkinson’s disease that we will be able to provide early detection, disease halting therapies, and cell replacement options. A better conception of the disease process would open doors in all of the other areas of research.

Given the slow pace of progress thus far, you will understand that this area of research is not easy. And it is made difficult by many issues. For example, it may be that we are blindly dealing with multiple diseases that have different causes and underlying mechanisms, but display the same kinds of symptoms (rigidity, slowness of movement and a resting tremor). Multiple diseases collectively called ‘Parkinson’s’. By not being able to differentiate between the different diseases, we have enormous confounding variables to deal with in the interpretation of any research results. And this idea is not as far fetched as it may sound. One of the most common observations within a group of people with Parkinson’s disease is the variety of disease features the group presents. Some people are more tremor dominate, while others have severe rigidity. Who is to say that these are not manifestations of different diseases that share a common title (if only for ease of management).

This complication raises the possibility that rather than being a disease, ‘Parkinson’s’ may actually be a syndrome (or a group of symptoms which consistently occur together).

Recently there have been efforts to deal with this issue within the Parkinson’s research community. We have previously written about the improved diagnostic criteria for Parkinson’s disease (click here to read that post). In addition, as we mentioned above, some new clinical trials are focusing on people with very specific types of Parkinson’s disease in which the subjects have a particular genetic mutation (Click here to read more about this). Better stratification of the disease/s will help us to better understand it. And with the signing into law of the 21 century Cures Act by President Obama, the Parkinson’s research community will have powerful new data collection tools to use for this purpose – in addition to more funding for research at the National Institute of Health (Click here to red more on this).

More knowledge of the basic biology of Parkinson’s disease is critical to the road forward. Whether the Parkinson’s disease-associated proteins, like alpha synuclein, are actually involved with the cell death associated with the condition is a question that needs to be resolved. If they are simply the bio-product of an alternative (unseen) disease process is important to know. 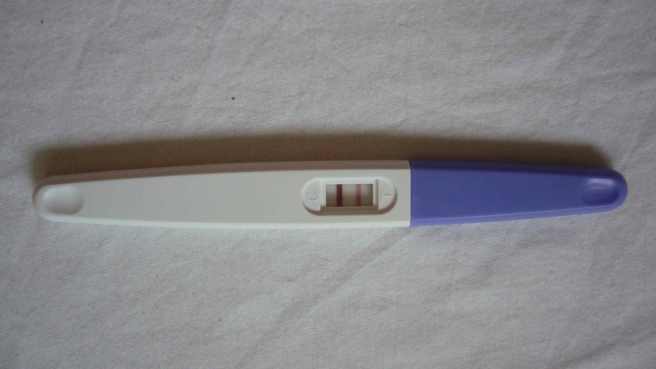 Consider the impact of a pregnancy test on a person’s life. Source: Wikipedia

Ethically, the ‘early detection’ area of research can be a bit of a mine field, and for good reasons. You see, if we suddenly had a test that could accurately determine who is going to get Parkinson’s disease, we would need to very carefully consider the consequences of using it before people rush to start using it in the clinic.

Firstly there are currently no disease halting treatments, so early knowledge of future potential events may not be useful information. Second, there is the psychological aspect – such information (in light of having no treatment) may have a dramatic impact on a person’s mental wellbeing. And thirdly, such information would have huge implications for one’s general life (for example, individuals are legally bound to tell their banks and insurance companies about such information). So you see, it is a very tricky field to tackle.

Having said all of that, there are some very positive aspects to early detection of Parkinson’s disease. Early indicators (or biomarkers) may tell us something new about the disease, opening novel avenues for research and therapeutic treatments. In addition, early detection would allow for better tracking of the disease course, which would enhance our ideas about how the condition starts and changes over  time.

One of the most significant findings in Parkinson’s disease research over the last few years has been the discovery that transplanted dopamine cells can develop Lewy bodies over time. It is very important for everyone to understand this concept: healthy embryonic cells were placed into the Parkinsonian brain and over the space of one or two decades some of those cells began to display the key pathological feature of Parkinson’s disease: dense, circular clusters of protein called Lewy bodies.

The implications of this finding are profound: Healthy cells (from another organism) developed the features of Parkinson’s disease. And this is (presumably) regardless of the genetic mutations of the host. It suggests that the disease spreads by being passed from cell to cell. There is a very good open-access article about this in the journal Nature (click here to read that article).

Slowing down the progression of Parkinson’s disease is where most of the new clinical trials are focused. There are numerous trials are focused on removing free-floating alpha synuclein (the main protein associated with Parkinson’s disease). This is being done with both vaccines and small molecules (such as antibodies). Beyond possibly slowing the disease, whether these clinical trials are successful or not, they will most definitely provide an important piece of the puzzle that is missing: is alpha synuclein involved with the spread of the disease? If the trials are successful, this would indicate ‘Yes’ and by blocking alpha synuclein we can slow/halt the spread of the disease. If the trials fail, this would suggest that alpha synuclein is not responsible, and indicate that we need to focus our research attention elsewhere.

2017 will be very big year for Parkinson’s disease as some of these clinical trials will be providing our first glimpse at resolving this major question.

Replacing what is lost

So if we discover a means of stopping the disease with a vaccine or a drug, this will be fantastic for people who would be destined to develop the condition… but what about those still living with the disease. Halting the condition will simply leave them where ever they are on the course of the disease – a rather unappealing situation if one is in the latter stages of the condition.

Cell transplantation is one means of replacing some of the cells that have been lost in this disease. Most of the research is focused on the dopamine neurons whose loss is associated with the appearance of the movement features of Parkinson’s disease.

The former is behind schedule due to the technical matters (primarily the source of the tissue being transplanted) and the latter is controversial to say the least (click here and here to read more). In the new year we will be watching to see what happens with a major research consortium called G-Force (strange name we agree). They are planning to take dopamine neurons derived from embryonic stem cells to clinical trials in 2018. Embryonic stem cells represents a major source of cells for transplantation as they can be expanded in a petri dish (millions of cells from just one cell). If they can be pushed in the right direction and they develop into dopamine neurons, they would allow people to start having some of the cells that they have lost to Parkinson’s disease to be replaced.

Above we have discussed the key areas of Parkinson’s disease (dealing with ‘finding a cure’) for 2017. We would love to hear your thoughts on them. If not, here on the SoPD, then somewhere else. Please get involved with the discussion in which ever forum you choose. Speak up and add your personal account of things to the discussion.

It is only through the sharing of ideas, information, and experiences that we are going to figure out this debilitating condition.

And now we are going to change focus and discuss what we are expecting/hoping for in the new year (particularly from the clinical side of things):

So looking ahead, what is happening:

Recently some major players have come together to focus on Parkinson’s disease:

In addition, there are many clinical trials starting and also announcing results. Here are the top 20 that we are keeping an eye on:

Please note that this is not an exhaustive list – we have missed many other compounds being tested for Parkinson’s disease. For example there are always alternative versions of products currently on the market being tested in the clinic (eg. new L-dopa products). We have simply listed some of the novel approaches here that we are particularly interested in.

EDITORIAL NOTE HERE: All of the team at the SoPD wants to wish everyone a very enjoyable festive season where ever you are. And all the very best for the new year!

The team at SoPD

The banner for today’s post was sourced from Weknowyourdreams